We all love prospects. Not in a sexy way, though Jose Iglesias does have a certain magnetism about him. No, it’s their promise we love, the possibility that each player in the top 11 could become great, thereby helping propel my favorite team (not yours) to the World Series. Prospects are lottery tickets in the common parlance of the term, a role of the dice as to whether they’ll ever figure out the game enough that they can contribute at the major league level. But they’re also lottery tickets in promise. Each represents what could be, what we hope will be, and while most don’t reach the upper reaches of their ceiling, the height, the potential of that ceiling makes them baseball’s ultimate exercise in optimism.

Paraphrased conversation I had in 1992:

Friend (Orioles fan): So you wouldn’t trade Jeff McNeely for Cal Ripken, Jr., huh?
Me (Red Sox fan): Heck no! We already have Luis Rivera and someone’s going to have to step in for Bob Zupcic one of these days.

As you certainly know, in 1992 Cal Ripken was a Hall of Fame shortstop at the height of his power. Jeff McNeely was, to put it charitably, not. McNeely was the Red Sox’ no. 2 prospect that year, according to Baseball America. Twenty years later his Baseball-Reference page lists him as, “Centerfielder and Pinch Runner.” The second of the two designations isn’t bestowed when your career turned out as intended. It also isn’t bestowed upon starting outfielders, but as is probably obvious, McNeely never was that. Outside of his 1991 season in High-A, he never posted an OPS above .700 in the minor leagues, which is about the bare minimum of skin you have to show to get into the night club. It was hoped McNeely would turn into the next speedy Red Sox centerfielder, batting atop the lineup for a decade or more. Instead he became like so many promising players before him: nothing. Forty-four major league plate appearances and he was gone.

This kind of thing happens to every team, the Red Sox aren’t unique… buuuut since I have their system pulled up let’s just pile on, shall we? In 1994 Baseball America’s top 10 Red Sox prospects included the names Ortiz, Rodriguez, McGuire, and Johnson. That’s Luis Ortiz, Frankie Rodriguez, Ryan McGuire, and J.J. Johnson. Outside of Trot Nixon, who was no. 1 on that list, Jeff Suppan* would have the best major-league career. After him we’re back to McGuire (Ryan), who spent all of 368** games in the bigs.

* Hard to believe nobody ever nicknamed him the Supp Nazi.

**Originally I had mistyped 367, but who would want to short-change poor Ryan McGuire out of one of his 368 games?

As direct comparisons go, McNeely is to the latest Red Sox phenom, pitcher Matt Barnes, as a flaming goat is to a fighter jet. At least that’s the case right now. But these things have a way of changing, even though Matt Barnes has put together as good a minor-league resume over a half season as any Red Sox pitcher in the last decade.

How good has Barnes been? Here he is throwing a pitch for the Greenville Drive earlier this year: 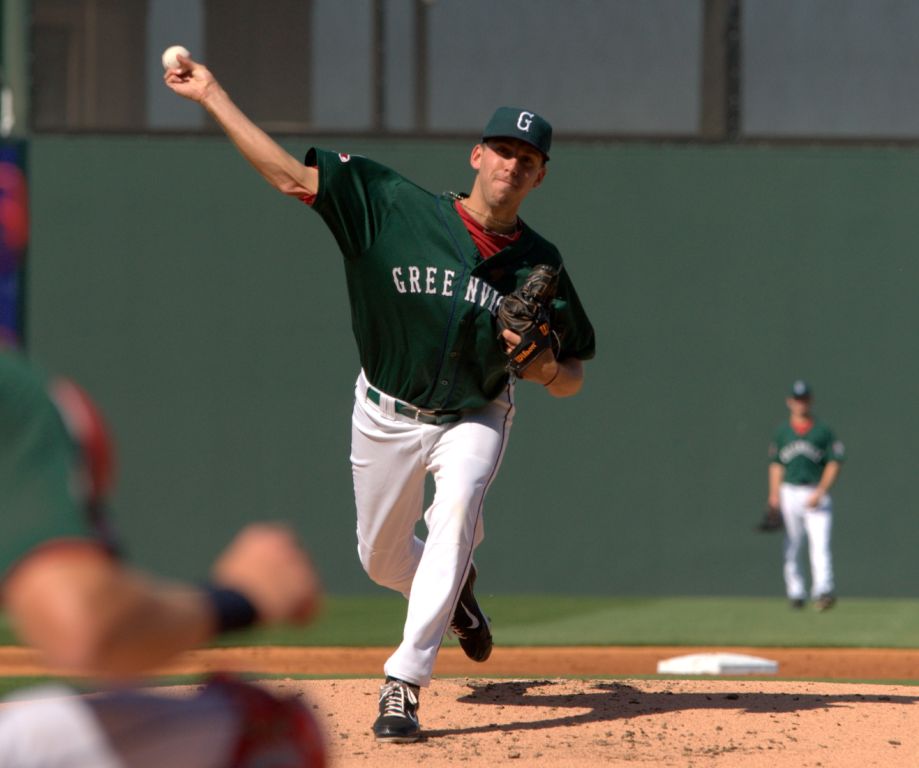 His fielders have so much confidence in him that they hold their gloves in their throwing hands while he pitches. As it turns out, the confidence isn’t misplaced. On May 17th, Barnes’ 67 strikeouts were the most of any pitcher anywhere, majors or minors. The best strikeout rates in the majors belonged to two Washington Nationals, Gio Gonzalez and Stephen Strasburg, at 11.1 each. Barnes was at 13.5. I bring that up because that’s when I started writing this article and, even though it’s not true any more, that it was ever true is pretty impressive.

OK, that’s a lot of strikeouts, but minor-league hitters strike out a lot, especially in the low minors and especially against polished pitchers fresh out of college. The stats that make those strikeouts impressive are these: during those same 67 2/3 innings, he’s walked 11, and in those same 12 starts, he’s given up more than one run once.

So the stats are very good. Now let’s all jump to wild conclusions! Let’s see, can someone please compare the High-A pitcher to one of the greatest pitchers of all time? How about Walter Johnson, or Cy Young, or Bob Gibson… Oh! I know! How about Roger Clemens? Terrific! You’re going to be shocked to hear this so I recommend sitting down and removing your pants*: the comparison doesn’t really work. Both were picked 19th overall, which you could also say of Tony Torcato and if you look in a mirror right now you’ll see by the look on your face that you’ve never heard of him.

*Ha ha. Made you take your pants off for no reason.

Looking at the comparison more closely, both Clemens and Barnes are alive, white, male pitchers, but since Barnes beat the rap on that federal kitten-trafficking charge the similarities end there. He’s not the next Clemens, he’s the next Next Clemens.

The truth is, as great as Barnes has been and as promising as he appears to be, nobody knows. We can project him forward based on scouting information, aging patterns, and his performance both in the minors and in college and we can work ourselves up into a fine lather in the process, but in the end, well, it’s kind of like this:

The more I learn about baseball the more I realize we don’t know very much. Sure, we can project team and player seasons and on the whole we do pretty damn well at it, but individually it’s not 100 percent or particularly close. Each year someone shows up out of the blue. Jose Bautista? Curtis Granderson can all of a sudden hit lefties? Those are just two of many that nobody could have projected to happen, or, if they did project them to happen, they’d have been an idiot. This isn’t to say we shouldn’t keep trying to get better, just that the error bars are far apart.

If he keeps going like this, Red Sox fans will fixate on Barnes. One of them might even write a ridiculous article about him in these very virtual pages! Can you imagine it? They’d probably not have that much to say about him and have to make up a ridiculous conversation between a general and a first officer involving… I don’t know, missiles or something! Ha ha! Don’t click on that article.

The deification of Matt Barnes is only beginning. Soon he’ll be blown up to almost impossible lengths. Trade Matt Barnes for Felix Hernandez? Are you crazy? Never! Paraphrased conversation I will have in 2013:

Friend (Mariners fan): So, you wouldn’t trade Matt Barnes for Felix Hernandez?
Me: Heck no! We already have Felix Doubront and someone’s going to have to step in for Jon Lester one of these days.

Barnes looks like he’s going to be a hell of a pitcher. Or not. Oh, drat. Now we’ll all just have to watch some baseball games to find out.