It was mentioned more than once during Wednesday's Cubs/Brewers broadcast on Fox Sports Wisconsin that the Brewers were using a different lineup for the 20th game in a row. With such high preseason expectations this year, even with the loss of Prince Fielder, Milwaukee has been struggling a bit recently. In the last month, the club has lost three of its starters for the season with a fourth key player out until roughly August. With a 25-31 record through the first 56 games, the Brewers are in fourth place in the National League Central, 6.5 games behind the Reds and 3.5 games behind both the Cardinals and Pirates. On Wednesday, when the broadcasters and various beat reporters started mentioning the team's 20-game streak of using a different lineup, it seemed like a perfect example of just how tough things have been for the Brewers. "Of course the team is going to be playing poorly if they can't even figure out what guys to put out onto the field!"

But is that so? Twenty straight games with a new lineup sounds like a lot, but is it? Looking at the games to date (and ignoring the change in pitcher every game), the Brewers have used 41 different lineups in those 56 games (73% of the games). Again, that seems like a lot, but who really knows? Maybe every team has that kind of turnover in their lineup. After all, even the Rangers have to plug in the Craig Gentry's and Daniel Murphy's of the world occasionally. 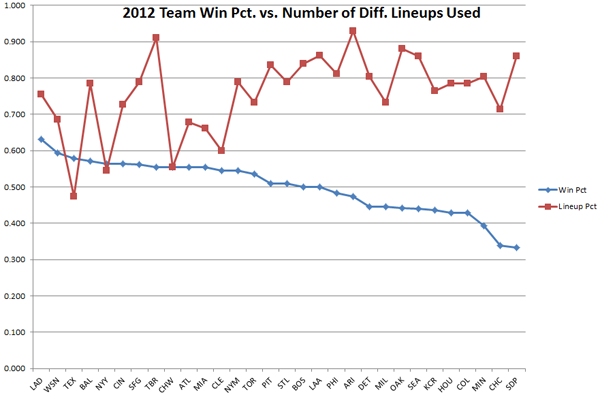 As you can see, it's a bit of a mess. The top 12 teams in particular follow no kind of pattern with their number of lineups used, with Tampa Bay going high and New York, Texas, and Chicago going very low. The second half of the line seems a bit more ordered, but even then teams drop above and below the 80% line in no particular order.

We're only a third of the way through the season, however. It's possible that we're dealing with a small sample issue here. Maybe the Dodgers, Orioles and Giants points, for example, will fall back into the pack as the season progresses and we see how good these teams really are. For that reason, I've included the same chart below, but with 2011's full season data instead. 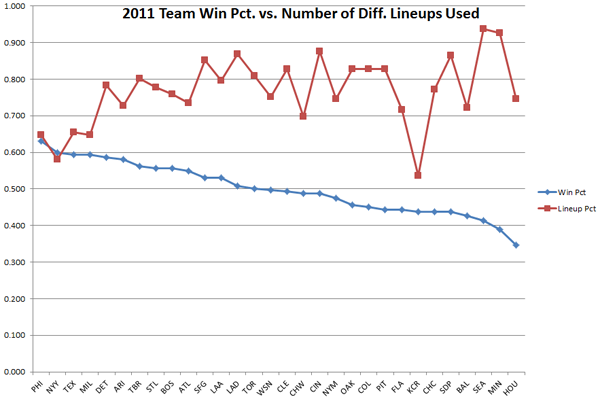 Over a full season, the line does seem to more closely fit with our hypothesis. The best teams in the league have, far and away, the lowest numbers of different lineups used. As the clubs' winning percentages decrease, their lineups used tend to increase. There are exceptions, of course—Kansas City only used 87 different lineups all year somehow—but the trend does seem to exist.

Now, there could be plenty of explanations for this. The teams with the fewest lineups used seem to be the teams with the most veteran talent on the roster. Teams who are far out of the race by August or September might feel more comfortable with experimenting with young players. Teams with a large number of injuries might have an increased number of lineups despite still fielding a quality team. Teams could make deadline deals and then spend a week or two figuring out how the new players fit into the lineup. Or a dozen other reasons. These graphs don't prove anything other than the fact that worse teams have a slight tendency to use more lineups.

So, while it sounds like a bad thing that the Brewers have used a different lineup in 20 straight games, it really doesn't tell us much about how the season will turn out. If anything, the club could look at the fact that they have actually used fewer lineups than the average team so far this season and see a reason to be optimistic. One hundred-plus games offers a lot of time for things to stabilize, though, even in the wake of so many devastating injuries. Brewers fans will just have to be patient.