The Red Sox have been described as a data-driven organization. Well, what executive — in any industry — would look at those numbers and conclude that this is an endeavor worth perpetuating?

This is not complicated: As a reliever, Bard is excellent. As a starter, Bard is abysmal. He should readjust to the bullpen in Pawtucket and then return as a setup man (or closer) in the second half. But because this is Boston, and because this is the Red Sox, there is a stubborn and misguided reluctance to admit error.

Morosi scores the hat trick by questioning Boston’s philosophy, aptitude, and hubris within a two-paragraph snippet. It’s an inspiring column, one that made me wonder: if people react like this to the Bard news then how did they react to Boston’s most zany attempt at bettering their roster. There are plenty of choices—the time Boston tried using a closer-by-committee approach, or how they play Adrian Gonzalez in the outfield during interleague play—but for my money, the one that stands out happened on August 16, 2004.

Entering play that night, Terry Francona had a tough decision to make. His regular second basemen, Pokey Reese and Mark Bellhorn, were injured; his fill-in second baseman, Bill Mueller, had to play third base because Kevin Youkilis had suffered an injury, too. That left Francona with two options on the roster: Ricky Gutierrez, a career middle infielder, and Doug Mientkiewicz, a career first baseman. Francona did what any good old baseball man would do if faced with such a choice: he started Mientkiewicz. Everything went fine. The Red Sox won, Carlos Delgado barreled over Mientkiewicz then got drilled by a Derek Lowe pitch. Francona moved Mientkiewicz to first base later in the game and never played him at second base again.

So how did the press react? Here’s a sample from Nick Cafardo’s column in the Boston Globe:

It was a Red Sox team moment when a Gold Glove first baseman, Doug Mientkiewicz, was willing to play out of position at second base. 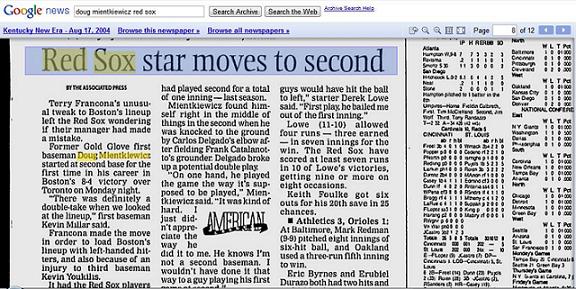 There you have it. Morosi may have gone in on the Red Sox, but even he doesn’t have the audacity to call Mientkiewicz a star.

You need to be logged in to comment. Login or Subscribe
GregLowder
I remember this game. If I remember correctly, the play he made on Delgado was extremely impressive as he picked it off a short hop and tagged Delgado in one motion.
Reply to GregLowder
Chucko
Typical FOX BS, stoking readership through overreaction, overstatement, lack of critical thought, ad hominem, and inability to see the big picture. Why is Morosi not writing for the Globe?!

While I can't argue against Bard having been awful this year, I wonder exactly what Morosi would have deemed the correct time to pull the plug had he been wearing Cherington's Daddy Pants. Would Morosi care to admit that a good starter is worth more to a team than a good reliever? Yes? Then it would seem that doing everything they can to make Bard a starter, including demoting him so he can work on mechanics in a less frantic environment, would simply qualify as due diligence on the part of the front office. And who exactly does Morosi think should be the #5 starter instead of Bard anyway? Does he honestly expect Daisuke or Cook to grossly outperform Bard while he's away? And why am I yelling?!?! Because simplistic editorializing makes me mad. Thanks for the therapy RJ!
Reply to Chucko