I've never been more depressed in my life than after finishing this Ray Bradbury short story about life on Venustinyurl.com/ydte5fj

That links to a very nice short story about humans living on a planet where the sun comes out for only two hours every seven years. The rest of the time it rains. I'm about to spoil the ending, so look away if you must, but the sad part comes when the sun finally comes out and one little girl misses it. Everybody gets to see the sun, play in the sun, stare at the sun, but one girl in a closet doesn't. Super sad.
That's about how I feel when I look at this: 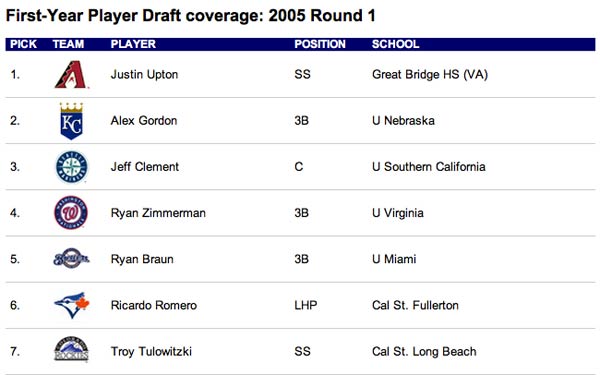 Jeff Clement: -0.5 career WARP
Average of the rest: 16.5 career WARP, with a combined four Gold Gloves, nine Silver Sluggers, nine All-Star appearances, 14 top-25 MVP finishes, four top-five MVP finishes, and only one of them past six years of service time. There have been worse draft picks, probably about a billion worse draft picks, but I'm not sure there's been one that was so entirely surrounded by joy and achievement.

BAVASI!
Reply to JimmyJack
mattymatty2000
I was just looking at that first round yesterday! It was about the best first round in recent memory and with the third overall pick the Mariners did the next-to-impossible and picked wrong.

I wonder if that's how they did it.

... which had Clement going #4 ... so it doesn't seem like picking Clement with #3 was "a bad decision at the time".
Reply to LynchMob
LynchMob
And here's 2 applicable comments from another thread at minorleagueball.com ...

Clement
I may be wrong, but it seems that Seattle is going for a need, rather than taking the best player available. Not that Clement is bad.
by dduncan on Jun 7, 2005 10:07 AM EDT up

I Think It's Multiple Needs
They're thin at catcher, don't have many power hitters coming up in the minors, and the power they have at the major league level is almost all right-handed... Clement addresses each of those concerns.
You keep using that word. I do not think it means what you think it means.
by ESiegrist on Jun 7, 2005 10:33 AM EDT
Reply to LynchMob
LynchMob
Ah, and here's a Sickles comment ...

http://www.baseballamerica.com/today/prospects/prospect-hot-sheet/2012/2613546.html
Reply to LynchMob
JimmyJack
The other thing to keep in mind is that Bavasi needed a catcher for Tim Lincecum NOT to throw to.
Reply to JimmyJack