The control stats for Blanton: six innings, one walk, 73 percent strikes. For Bard: 1 2/3 innings, six walks, two hit by pitches, 44 percent strikes. Here's a complete list of the pitchers who had walked at least six batters and hit at least two in an outing of two innings or less before Bard:

You might have noticed that one pitch from Bard was so far outside it missed not only the strike zone, but the strike zone â€‹plotâ€‹. Here's where that pitch (to Edwin Encarnacion) was: 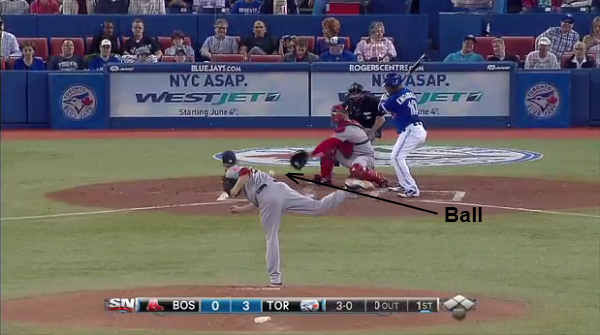 And here's where Bard's final pitch of the afternoon (also to Encarnacion) was: 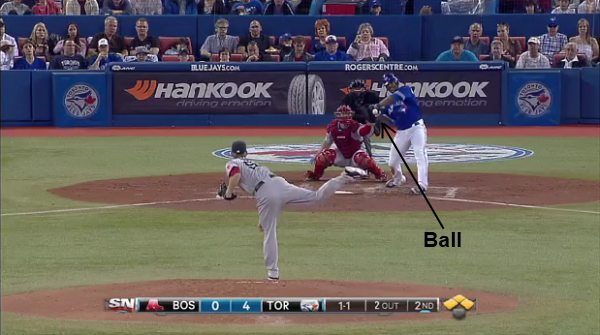 Finally, here's the acrobatic dance of pain Encarnacion did a split second later, which looked a little like a soccer scoring celebration. Sometimes it's even less fun to face a pitcher with control problems than it is to play behind one.

You need to be logged in to comment. Login or Subscribe
rawagman
I don`t know if this is the right place to mention it, but I have always found the brooksbaseball charts to be very hard to read in the sense that I cannot easily distinguish all of the colour gradiants within the plot (I am not colourblind).
In play, no outs, and in play, runs seems to be the same colour. Also, I would hazard that the plot points are so small as to make the colours almost bleed, from a visual perspective.
Reply to rawagman
bornyank1
I relayed your feedback to Dan and Harry.
Reply to bornyank1
Leg4206
Mr. Thorburn has talked about watching where the mitt is set and the location of the resulting pitch. Without the mitt location data, final pitch location (certainly for most fastballs) is data lacking context.
Reply to Leg4206
bornyank1
True, but I can tell you that the target was not outside the strike zone for over half of Bard's pitches. When your pitch plot looks like that, you're missing the target. A lot.
Reply to bornyank1
Leg4206
That's true, I was just musing about the plots in general
Reply to Leg4206