I spent 10 years living in Philadelphia. I moved there on a lark, intending to leave almost immediately, but every time I’d try, I’d fail. I got the first job I cared about there, did the dating thing, met my wife*, attended and graduated from graduate school, and had my children there, all in the city.

The one constant throughout was the Phillies. Every year as often as I could, I’d hop on the subway (“the El”) and take it to its southern-most terminus, what used to be called Pattison Avenue Station.* In all that I attended, three specific games stand out, two for their status in Philly city history and one for what happened to me.

When I moved to Philadelphia the Phillies still played in the giant concrete toilet known as the Vet. I know that isn’t exactly an original description for the place, but it’s truly appropriate. The fans were almost as bad as the stadium, and the team was almost as bad as the fans, though to the Phillies’ credit, the players didn’t often get into fights with each other, smoke weed during the game, or urinate in full view of stadium officials. Getting tickets was never difficult.

Soon after arriving in Philadelphia, my roommate decided I should attend my first game. There was occasion, too: Phillies starter Omar Daal was attempting to lose his 20th game. The Phillies were putrid that year, managing 65 wins purely out of obligation. They had an imposing middle of the order featuring at 26-year-old Bobby Abreu, a 25-year-old Scott Rolen, and a 23-year-old rookie named Pat Burrell, but little else.

Daal had come over with Vicente Padilla and the mortal Travis Lee from Arizona in the Curt Schilling trade at the deadline. He was 2-10 when he arrived, which was just gentlemanly of the Diamondbacks. Over the next few months the losses piled up until on Sept. 16th Daal lost his 19th game. With two weeks to go in the season he’d have at least two more starts. Considering he had lost 19 of his 30 starts, his chances for reaching that millstone were pretty good. That was our signal to get tickets. Can’t miss that. Of course the bastard won. Well, he didn’t get the win, but the Phillies won the game and you can’t get the loss when your team wins (though Jeff Brantley tried that day). As my friend said while departing the Vet in annoyance, “Stupid Phillies. They can’t lose for winning.”

By the way, for just $20 you can sponsor Omar Daal’s player page at Baseball Reference. That’s an opportunity not to be missed.

Flash forward to 2007. I was about to ask my wife to marry me. The Phillies were about to do something far more ridiculous by losing their 10,000th game, the first franchise to ever accomplish such a feat. That’s must-see stuff. We grabbed tickets. Surprisingly, it wasn’t hard.

After their 9,999th loss, the Phillies had avoided the inevitable by winning the last game of the road trip, in Colorado. Now they’d return home to disappoint their fans one more time. The date was July 15, 2007. The pitching match-up wasn’t worth remembering as soon as it was announced: Kip Wells against Kyle Kendrick. This was back when Kendrick was defying the very laws of pitching as we know them by striking nobody out, walking everyone, giving up rockets and yet repeatedly coming out unscathed. It was awful. His luck had to give eventually, right? We sure as heck hoped so. To their credit, most fans seemed to embrace and own their favorite team’s futility. There were 10,000th loss t-shirts and shot glasses, an appropriate memento if ever one existed, and fans hung banners and held signs like this one: 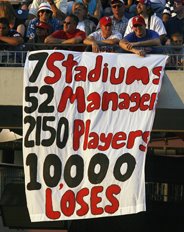 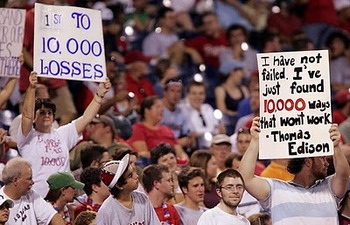 That night could have been perfect, but it wasn’t. They won. There wasn’t even a sense of theater as the Phillies crushed Wells, who departed without getting an out in the second inning. By the fifth it was 9-0. Boooo!

We were so disappointed we didn’t even go to the second game of the series, which was good because the Phillies won that one too. It took them until Sunday to finally lose their 10,000th game. What a bunch of teases.

Three years later I was married with twins on the way. The Phillies had actually turned into a team worth watching, one that didn’t require some awful event or landmark to justify my attendance. A friend of my dad’s was to be in town and had bought four good seats to the game, but his plans changed last minute and he couldn’t attend. He express mailed the tickets to me, but because it was last minute, I couldn’t find anyone to go with my wife and I. We decided to try to sell the two extra seats for their face value of $50 each. We got there early but couldn’t find a buyer. Nobody, it seemed, wanted two very good tickets at a fair price.

One scalper had approached me and offered to buy them at a deep discount, an offer I had rejected by telling him I’d rather rip the tickets up and flush them down the toilet than sell them to him for that amount. But after almost an hour of failure and with the game’s start approaching, I went back to the scalper. He reiterated his initial offer that I again rejected. We went back and forth for a bit, but eventually he gave in. He gave me five crisp $20 bills and I gave him the two tickets.

Walking through the gates, I felt pretty proud of myself. I hadn’t backed down. I had stood my ground, and now my wife and I had two great seats and $100 to spend at the park. Sweet deal. I usually don’t buy much food or drink at games because the costs are so high, but this time I didn’t care. I had $100 to burn! We bought beers in one line, nachos in another, and later I got my wife a burger with fries, and I’m sure we bought some other stuff.  We spent over half the money enjoying ourselves and returned home. I put the rest of the money in my wallet and left it there.

A week later, I went to a local café. I paid with the last two of the twenties I had earned at the ballpark. The lady behind the counter took them and looked them over for a second. “These are counterfeit,” she said. “What?! No way,” I said. “Definitely,” she said. She handed them back to me. I started to hold one up to the light to get a better look but that wasn’t even necessary. They weren’t just fakes; they were awful. Nobody would mistake them for real money upon even the most cursory inspection. The problem was, I hadn’t cursorily inspected them. And really, who inspects their money? I took it from the scalper (and incidentally, who knew you can’t trust scalpers?), noticed the greenness and felt the crispness of the bills as they passed through my peripheral vision and into my wallet. Done deal.

Looking at them in the café they looked like monopoly money. The images were slightly blurry and the color wasn’t right. They didn’t even feel like real money. They were basically images of $20 bills printed on not particularly expensive stationary paper. This wasn’t the insidious counterfeiting made in a warehouse outside town, with machines stolen from the U.S. Treasury Department that you hear about on news magazines. This looked more like a daycare class decided to make their own money with materials found on aisle 12 at Office Depot.

I paid for the food with real money (I think?) and went home to my wife. Once home, I handed her the fakes and said only, “Look at these.” It took her a second and a half.

The truly amazing thing is that I spent $60 worth of that bogus garbage but, like me, nobody bothered to look. Nobody noticed the shoddy workmanship, the high-school-shop-class quality, or felt the ‘This credit card offer will change your life’ paper stock. Nobody noticed anything until this woman at a café bothered to look. It took her four seconds to figure it out and it took me half that time to confirm it.

I figure the guy was willing to buy the tickets for either a ridiculously low amount of real money or, he’d give the big man his asking price in fake dough and then spend the next three hours peeing his pants laughing.

Now I live in Portland, a city without a baseball team. It’s really one of the very few downsides to living out here, though admittedly it’s a big downside. I’d like to be there at the Phillies 15,000th loss, and maybe I’ll fly back just to see the spectacle. Besides, I’ve still got $40 to spend. But not really.

You need to be logged in to comment. Login or Subscribe
jhardman
Only in Philadelphia...
Reply to jhardman
gweedoh565
Ha, scalpers. I KNEW something was amiss when he actually "paid" you face value for the tickets.

I once bought a scalped ticket for a Cards game in St. Louis. The guy showed me the ticket- about $25 face value- before agreeing to take $20 for it. When I got to the turnstile, the ticket wouldn't scan. Upon closer inspection, I saw that it was for the game the NEXT DAY.

I was annoyed, but I remembered that he had showed me the ticket before selling, so it was really on me for not checking the date. Sneaky dudes, they be.
Reply to gweedoh565
aaronbailey52
I was waiting in line to buy a ticket once at old Busch Stadium. A scalper came up and just gave one to me.

Great article. Now time to verify the bills in my wallet.
Reply to jdubin
mattymatty2000
Ever since that incident I've been more vigilant about looking at the money I receive from people.

Thanks, glad you enjoyed it.
Reply to mattymatty2000
rreading
This whole story is Philly. Perfect! I enjoyed. The day after I moved, I went to the movies and saw an over weight 8 year year old throwing candy in the air and charging at it with an open mouth. That has been my longest lasting Philly moment, oh and the time a guy pissed himself next to me on the El.
Reply to rreading
mattymatty2000
The first time I ever got on a SETPA bus we were pulled over by the cops because a (I assume) homeless guy was peeing on the back door.
Reply to mattymatty2000