Here are the three best pitches of the week, or rather some number near three in some period of time that is roughly week-like.

3. Andrew Miller, slider, against Jose Molina.
There's a tendency to judge these pitches on how the batter reacts to them. This seems like a flaw in the judging, but maybe this is actually just right. Without being in the pitcher's head, we don't really know whether the pitch was exactly as he intended it. A two-seamer with nasty movement can look an awful lot like a two-seamer that gets away from him. Even if he did execute his pitch perfectly, exactly as he intended it, we can't know without being the hitter whether it was actually a difficult pitch to hit. Brian Moehler probably executed a lot of garbage pitches exactly as he intended them, as slightly less-garbagey garbage. Our understanding of the value of pitch sequencing is primitive. Catchers' targets are often inexact suggestions, or they allow for the movement of the pitch, so it's hard to say the pitcher hit his target exactly right. Our view of these pitches on TV is misleading and inconsistent. So we're left with the one thing we can clearly observe.

So here's an example where it's hard to appreciate just how great the pitches were, or where it's easy to overestimate just how great the pitches were. From my view, the first pitch is basically unhittable, as shown by Nick Swisher kicking his leg back hoping to get a call, the equivalent of a beaten defender flopping in basketball. Can we be sure that seemingly perfect pitch was really where Price was trying to throw it? Yes, he confirms, by throwing the second one almost exactly where the first one was: about a half-inch further inside, and about four inches higher, perhaps a recognition that the first pitch was the low end of the strike zone and he might not get the same call twice. Now Price knows that Swisher knows that Price has established that pitch and could throw it a hundred times in a row and probably get 100 strikes. So Swisher is geared for that spot, and if Price misses over the plate a few inches, Swisher is going to be able to hit it. So Price moves to the outside edge. He throws the hard cutter toward the top of the zone for good measure so that, on the off-chance Swisher recognizes the cutter and figures out what Price has done, he won't be quick enough to react and spoil it.

Or maybe I'm imagining all this and Swisher was just distracted by a hummingbird. Does it matter? David Price made Nick Swisher's face explode!

The GIFs below are the remnants of some high-concept thing I was going to do in this space but that I mostly scrapped and am not now bothering to explain. So the series of GIFs is going to look nonsensical, but they do tell a story. Yes, they are out of order.

The existence of this strikeout tells us that playing major-league baseball is either unfathomably difficult, so difficult that one of the best hitters in the world struggles to hit even a non-professional pitcher, or way, way easier than we think. You think you could strike out Adrian Gonzalez? I bet you could, occasionally. I mean, not a lot. But once in a while. On a long-enough timeline, we'll all strike out Adrian Gonzalez.

Not sure whether the GIF or the still is better, so here are both: 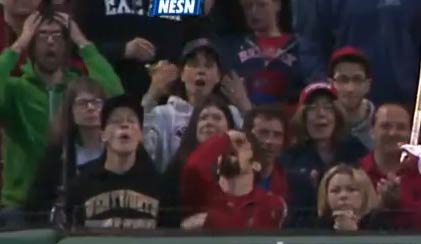 You need to be logged in to comment. Login or Subscribe
cbal316
I love this stuff!
Reply to cbal316
jhardman
The Chris Davis/Adrian Gonzalez strikeout pitch is priceless. Thanks for adding that.
Reply to jhardman
bhalpern
On the question of value of pitch set-up this seeems to be relevant: http://en.wikipedia.org/wiki/Rock-paper-scissors#Strategies
Reply to bhalpern
buffum
Damn, Davis actually has some nice movement on his pitch. Reminds me of Andy Marte.
Reply to buffum
TGisriel
The thing that amuses me about the Davis pitch (in the 16th inning, before he came back out in the 17th to pitch another shutout inning)is Buck Showalter.

Showalter knew that Davis had been a pitcher in junior college, and that there was some discussion when he was drafted about whether he would be a better pitcher than hitter. So Showalter had that nugget in his pocket in the event it became necessary, which it did.

Showalter was quoted as saying he had another position player he was considering, and who would have gone in for Davis in the 18th inning if necessary. That player was Markakis, another player who pitched before being drafted. Indeed, when the O's released Markakis to play on the Greek Olmpick team, the Greeks used Markakis as a pitcher as well as an outfielder.
Reply to TGisriel
asekoonce
I absolutely love this feature each week. Thank you, Sam!
Reply to asekoonce
mattymatty2000
I was watching the Molina/Miller at-bat and as soon as I saw that swing and miss I thought, "I hope Sam Miller puts it in his column."
Reply to mattymatty2000
draysbay
That's Carson Cistulli in green in the last image, right?
Reply to draysbay
lyricalkiller
Perfect
Reply to lyricalkiller
mhmosher
Davis looked like he has an idea of what he was doing? Did he have a background on the mound at all?