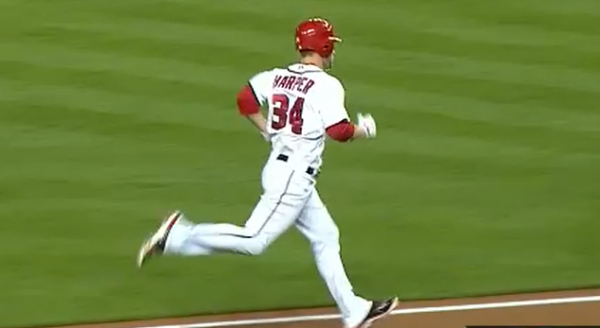 Ever since Bryce Harper's Sports Illustrated cover story at the age of 15, there's been a lot of talk about the phenom—and two topics especially: how good is this kid really going to be? and how cocky can he be? From obnoxious tweets to scary eye-black to a few blown kisses during a minor league tater trot, the second question seemed like it might be the more controversial one.

But since he's been on the big league roster, Harper has been a pretty solid citizen, gaining extra bases, making fantastic throws to the plate, hitting the hide off the ball. Other than the Cole Hamels incident, Harper's managed to focus the early conversation on the first question (his talent) and not the second (his attitude).

However, Harper had yet to hit a home run. Knowing what we know about how Harper acted in Hagerstown last season, would Harper's inner-prima donna show itself that first time he was the center of attention? How long would he soak up the attention during that 20-to-30 second tater trot?

On Monday night, Harper finally answered that question. On a 2-1 slider from San Diego's Tim Stauffer, Harper deposited the ball over the centerfield wall in Nationals Park. He wasted absolutely no time rounding the bases. There was no watching the ball fly, no kisses being blown, no obvious enjoyment of the moment at all. Instead, Harper put his head down and raced around the bases, for a tater trot time of 17.07 seconds. This is the second fastest (non-inside-the-park) home run trot of the season. The only player with a quicker trot was Carlos Gomez at 16.46 seconds, who didn't know that the ball had cleared the fence until he reached third base.

It's impossible to say if Harper will keep up this quick pace on tater trots #2 through #500. I'm guessing not. For now, though, Bryce Harper is one of the quickest trotters in Major League Baseball. It's not something that people would have even believed last summer.

The full list of quickest and slowest trots of the 2012 season can be found over at TaterTrotTracker.com.