Pitch-type linear weights are, let me say right here in the first line of this piece, not a particularly powerful tool for analysis. Hit this link if you don't know what they are, but the short of it is that they assign a run value to every pitch thrown based on whether it was a strike, a ball, an out, a single, etc. This tells you something, I suppose, but you, being a Baseball Prospectus subscriber, can probably see the issues already. They strip context of all sorts from the true act of run-prevention, ignoring the effects of defense, park, and luck. They ignore the abilities of the batters that a particular pitcher has faced. Perhaps most deadly, and yet most intriguingly, they ignore sequencing.

I might go so far as to say that a deep understanding of pitch sequencing is one of the holy grails of sabermetrics. (Will Woods called sequencing virgin territory about two years ago in these pages.) Unlike important but entirely unquantifiable aspects of baseball like a manager's motivational skills, the magic of PITCHf/x theoretically gives us powerful data from which we can work to approach these questions.

Having thus piqued your interest and given you the hope that I have found said grail and will be proceeding to drink from it right in front of you: I'm not solving any Hilbert problems here (neither the real kind nor Keith Woolner's baseball version). I do, however, want to set sail from one of the more startling small-sample pitch linear weights scores of this young season to see if we can find any sequencing-related reasons for such success.

The pitcher in question is Jake Peavy, who has put up a 2.19 FIP and 2.93 FRA in 45 1/3 innings to start the year, looking for all the world like the 23-to-27-year old Peavy who pitched in San Diego. Between 2004 and 2008, Peavy threw at least 200 innings three times, and more than 165 the other two years, all while posting a no FIP worse than 3.57 and no FRA higher than 3.71. At his worst, in other words, Peavy was preventing runs 14 percent better than his friends and colleagues around the league.

As it happens, R.J. Anderson wrote about Peavy last week, focusing on his altered fastball location, and particularly noting that he's worked up in the zone effectively. This is fortuitous! The pitch that has garnered so many positive points in the previously discussed pitch linear weights is Peavy's changeup, leaving it to me to discuss the pitch that is all about deception and delivery and a deft touch as contrasted with the fastball's gas and flames and roaring fires of velocitudinous damnation.

Does the changeup have any good nicknames? There's Bugs Bunny, I guess, but that's more of a descriptor of a particular changeup than it is a general nickname, right? Let's call the changeup the Nixon, for its deceit.

Peavy has thrown his Nixon 53 times per the Gameday classifications1, and that's added up to more than four runs of better-than-average pitching, according to FanGraphs, a rate of over eight runs per 100 pitches. That ranks as the second-highest average in baseball, behind only Yovani Gallardo's Nixon. The difference is that our new best friends Dan Brooks and Harry Pavlidis have recorded just nine changeups for Gallardo so far. The 53 that Peavy has thrown is a small enough sample, as you'll see below, that we don't need to go mucking about with a pitch that has sprung into and faded from existence just nine times.

First things first: what have been the actual outcomes of Peavy's changeups?

I didn't expect to see so many balls on such a successful pitch,2 but 10 swinging strikes on 53 pitches is mighty impressive. (MLB hitters have swung and missed at about 8.8 percent of all pitches thrown this year.)

Of the balls in play, we can break them down a variety of ways.

So here we see where the major driver of that linear weights score. That's a lot of outs on balls in play! I calculated the BABIP, but it's an irrational number, so I'm afraid to share it with you.

That would help the BABIP, I suppose. For what it's worth,4 Gameday stringers classified just one of the 14 balls as a liner and scads and scads of them as popups. Which leads us to this:

The "hards" were thus: Luke Hughes hit a ball to the warning track in straightaway center in Oakland on April 23rd; Josh Reddick hit one to the warning track in right, directly in front of Walter Haas's retired jersey, on the same night. The lesson, obviously, is that if Peavy pitches against the A's in the daytime or in Chicago, they'll take his Nixon deep. He doesn't need to worry about anyone else.

But the sequences! That's what we were interested in, right?

It's not clear that Peavy is going hard-fast as often as you might think. Perhaps the downsides of being predictable outweigh the upsides of showing batters different speeds. Peavy does appear to have doubled up (and even tripled up in one instance) on his change, though the samples here are such that a few more pitches could normalize those levels as well. He might also avoid throwing the sinker after the change, perhaps because those two pitches have such similar movement.

If you care to go breaking this down by how hard the balls were hit, Josh Reddick's near-bomb came on a first-pitch change, while Peavy went fastball-slider-change on Hughes, with the change winding up on the outer half of the plate after the fastball came down the middle and the slider cut outside for a ball.

What about the changes that were taken for balls? What came before those that perhaps helped the batter recognize and spit on them as they dropped below the zone?

I don't want to get too excited because we're talking about single-digit numbers of pitches here, but check out the sinker-change combo: six of seven times that Peavy has thrown it, the batter has taken the Nixon for a ball. Now, in those six plate appearances, Peavy has recorded a strikeout (on the next pitch, a change), flyout (following the change with slider-slider), strikeout again (change), walk (the fourth pitch does not appear to be in the database), flyout again (slider), and yet another strikeout (sinker). Again, I have to slow my roll a bit, but there's at least a hint here at the kind of multi-pitch sequences that we know pitchers, especially good ones, try to use to get strikeouts and weak contact. I'm not sure I have any sharp ideas about how to really get inside and rigorously examine those three-plus-pitch edifices that pitchers build.

So back to our matched pairs. What about the actual velocity delta, to isolate a single factor for which the pitch-type data might act as a proxy? Does Peavy go hard-soft to any noticeable degree?

I'm not sure I see anything there, especially since the standard deviation of the velocity delta for all pitches is about 3.59 mph. You would expect a difference based simply on the fact that a changeup goes slower than a fastball and Peavy throws a lot of fastballs. (Not necessarily relative to anyone else. Just relative to his other pitches. Every pitcher throws a lot of fastballs.)

Location? Maybe Peavy likes to change the batter's eye level, working him up with the fastball and then down with the change. Here is a plot showing the location of each pitch that came before a Peavy changeup: 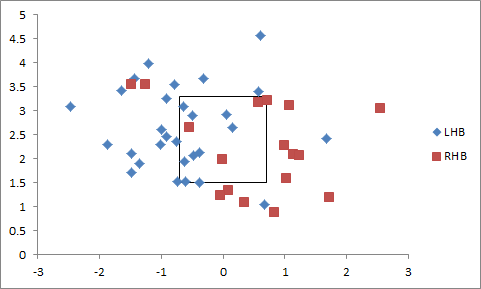 And here is a plot showing the location of the changeups: 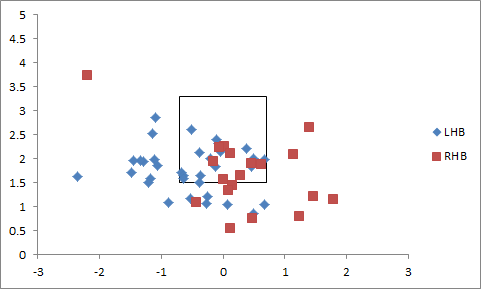 And here, for context, is a plot showing all of the 634 pitches he's thrown this year: 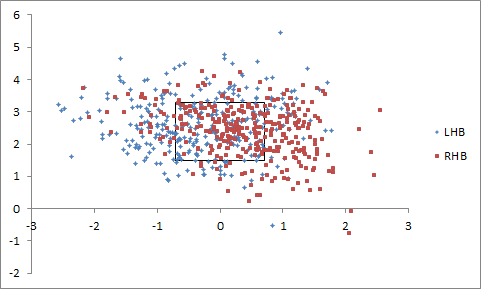 I don't think I see anything. How about a table?

It has occurred to me that sequence might not matter. It's entirely possible that upsetting a hitter's timing and keeping him off-balance is more about him not knowing where a pitch is coming and what type of pitch it will be than it is about a particular velocity or movement or location following another. That is, perhaps every successful pitcher has a balance into which his arsenal fits: throw too many fastballs, and the hitter gets the speed of it; throw too many changes and it stops being deceptive. But as long as the hitter can never know with any reasonable degree of certainty where he should swing the bat and when, perhaps that is all a pitcher needs.

Or perhaps I'm going off half-cocked because a pitcher who's thrown 45 innings doesn't have any identifiable patterns on his Nixon, even as said pitch has been, by the outcomes on the field, one of the most effective in baseball.