It’s July 7, 2010. David Price is on the mound during the third inning of a Red Sox-Rays game. He delivers his 40th pitch of the night and the scoreboard reads, “86 MPH, CHANGEUP”; significant, as the previous 39 pitches were fastballs, all over 92 miles per hour. Another 33 pitches pass before Price throws his next non-fastball—back-to-back curveballs. Over Price’s final 36 pitches, he throws eight offspeed or breaking pitches, giving him 11 on a night that he threw 111 pitches. Price exits after 7 2/3 innings pitched, having struck out 10 batters and allowed two runs.

It’s now May 2012. Price is 26 years old and a month shy of being five years removed from his draft year. Back in 2007, the then-Devil Rays tabbed him as the no. 1 pick over Matt Wieters, Mike Moustakas, and the like.  Ninety-five regular season starts, three postseason starts, and an All-Star Game start later, the Rays have to be happy with the selection. Price is foregoing celebration in favor of improvement. Six starts into a new season, Price owns a higher strikeout-to-walk ratio than run average (2.92 to 2.35) and nearly as many strikeouts (35) as total bases allowed (37).

Any discussion about Price’s success starts and ends with his fastball. Price throws the heater as hard as any left-hander in the game, but it goes beyond arm strength. He commands the pitch and its tailing action well enough that the fastball is a weapon inside and outside, to lefties and righties, early and late in the count. On that night in July, Price needed nothing more than his fastball to get batters out. Other times, Price‘s arsenal could use augmenting.

Coming out of Vanderbilt, Price featured a plus-plus slider. For whatever reason, be it health- or feel-related, Price lost his slider as he became a major-league regular. Price worked to overcome this setback by learning how to throw a spike curveball. The pitch, like Price’s changeup, showed promise, but offered little usability. Imagine the opposition’s surprise this season when Price came out chucking changeups; not just get-me-over changeups, but legitimate, quality pitches.

Rather than fall victim to the PITCHf/x classifications, the tables below group each pitch thrown by Price into three bins. Four-seamers, two-seamers, and cutters are binned as fastballs, curveballs and sliders as breaking balls, and changeup as offspeed pitches. The shift in Price’s overall pitch usage becomes more evident:

Price’s first-pitch usage shows no signs of this shift, but the same cannot be said for his selection on one-strike counts:

Price’s changeup is a temptress to free-swinging hackers and all-world sluggers alike. Examine the gif below, taken from 2011 footage, where Price fools Jose Bautista:

At the emergence of the changeup, it is worth noting that Price has shifted his placement on the rubber. As the image shows, Price closed last season on the third base side. He opens this season closer to the first base side. It could be a total coincidence, or it could be that the Rays wanted Price to get a better angle when throwing his changeup away to right-handed hitters: 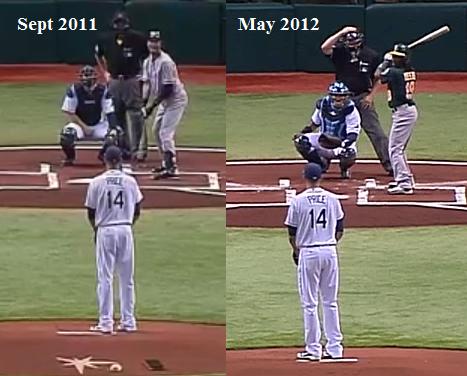 The decisions to increase changeups and shift on the rubber aren’t the only changes made by Price this season, as the lanky lefty is beginning to lean on his cutter. Greg Maddux used to employ a mantra: make the balls look like strikes and the strikes look like balls. Price has mastered this idea with his cutter, in part because of how he sets the pitch up. Below is a two-strike backdoor cutter thrown against Jemile Weeks to lead off the game. What you won’t see is that Price threw an inside four-seam fastball the pitch before, perhaps to set up his cutter. What you will see is Weeks’ bat remaining still while he looks the pitch in helplessly:

Like with the changeup, Price has used this technique before, just not as often. Here is another piece of 2011 footage showing Price throwing a backdoor cutter for strike three:

The same philosophy that makes the backdoor cutter work makes Price’s spike curve work. A key to making good pitches look bad and bad pitches look good is late movement. The longer the pitch deceives, the better. Josh Reddick falls victim to Price’s spike curve by none of his own fault. The pitch looks to be heading middle-in as it approaches the plate, only to plummet as Reddick swings—his leg posture on the final image tells the story:

These pitches are effective in large part because of Price’s fastball. Take the cutters. The tailing action on Price’s four-seamer would lead the ball away from a right-handed batter. When the pitch is approaching on the outside part of the plate, the batter is thinking fastball because of the velocity and expects the pitch to miss the plate. Instead, it runs back over the plate for strike three. The best-case scenario for the hitter is offering an emergency hack and fouling the pitch off.  Otherwise, it’s too late by the time the pitch crosses the corner of the plate. Similar mind games prevail for Price’s changeup and curveball.

Equally compelling is the catalyst. It remains unclear whether Price took it upon himself to diversify his offerings, or if some combination of James Shields, Jim Hickey, and Jose Molina forewent the toadying associated with star pitchers and instructed him on what it would take to improve. In the end, the change itself is what’s important—just ask Price.

Hat tip to Jason Collette for the gifs

Reply to fawcettb
MichavdB
Love these articles!
Reply to MichavdB
psugator01
I love the gif's as well. couldn't stop watching the change OVER AND OVER. that pitch is plain nasty
Reply to psugator01
RJAnderson
I keep re-watching the cutter gif and focusing on the umpire.
Reply to RJAnderson
eighteen
I focused on the catcher, who did a great job framing that pitch.
Reply to eighteen
Nickus
I kept focusing on the A's, and my god they can't hit. Seriously though, I love these articles. Keep 'em coming!
Reply to Nickus
beastjunior
Great, great stuff. Keep it up!
Reply to beastjunior
gilgamesh
Between this and the Rodney piece... are the Rays more focused on movement on the rubber than other clubs? Or is it just SSS?
Reply to gilgamesh
RJAnderson
Small sample size. I'm not sure if you saw my piece on who shifted rubber spots last season, but the Cardinals had two of the more extreme cases in Jaime Garcia and Kyle McClellan. Also, the Red Sox have shifted Daniel Bard and Clayton Mortensen so far this season.
Reply to RJAnderson