No one personifies this better than Angels’ shortstop Gary DiSarcina. DiSarcina went deep into April of the 1998 season before drawing his first walk, and proudly stated that it was a goal of his to not walk all season. He believed he was a better hitter when hacking away and being "aggressive". DiSarcina’s career OBP of .291 and five full seasons of .294 or lower haven’t deterred him, or moved the Angel coaching staff to dissuade him of the notion. So in honor of our misguided friend, I’ve elected to establish the DiSar Awards.
— Joe Sheehan, 2000

On Friday, with one out in the eighth inning of the Braves' 9-8 victory over the Rockies, Kris Medlen threw a 3-1 fastball up and in to Ramon Hernandez, and the Rockies catcher took it for a ball. It was Hernandez’ first walk of the season, in his 67th plate appearance. That is the longest stretch without a walk by any player to start this season, which means Ramon Hernandez is the DiSars leader in the clubhouse.

There are a few things that are interesting about Ramon Hernandez leading the DiSars. One is that Hernandez got to this point without being particularly aggressive. His swing chart (via Joe Lefkowitz's PITCHf/x Tool) shows he has actually had good control of the strike zone: 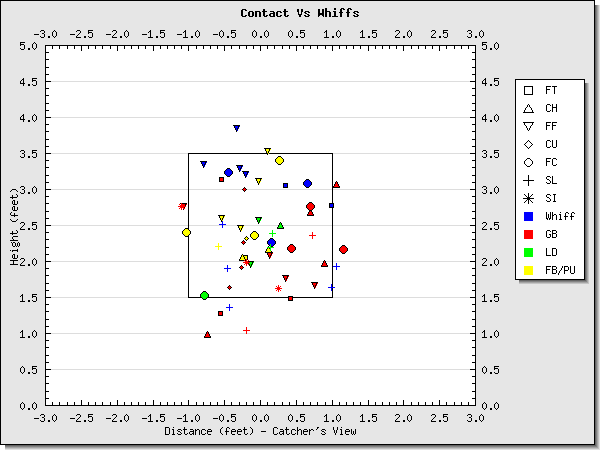 That graphic doesn’t look all that different from Brett Gardner’s swing chart. Hernandez has swung at just 27 percent of pitches outside the strike zone, according to StatCorner’s early numbers, and 46 percent of all pitches. In 2011, Dan Uggla swung at 28 percent of pitches outside the strike zone and 46 percent of pitches overall, and he walked 62 times. Hernandez has had six three-ball counts this year, and he hasn’t swung at a pitch outside the zone on those counts. His contact rate is up, which contributes to ending at-bats before four balls can be reached, but not drastically and not enough to explain his position atop the DiSars. His 66 walkless plate appearances are, it seems, just one of those things.

Another interesting thing about Hernandez leading the DiSars: sixty-six is a very low number for a DiSars champion. Since Joe Sheehan introduced the DiSars in 2000, nine of the 12 champions have topped 100 plate appearances. (Geoff Jenkins, the first winner, went 99.) Dayan Viciedo’s winning total of 82 in 2010 is the lowest ever for a victor. There will also not be a repeat winner this year, as each previous DiSars champ has drawn a walk this year, is out for the season, or is retired. Unless Cristian Guzman comes back. Like everything in life: unless Cristian Guzman comes back.

Hernandez may not end up the DiSars winner this year. DiSars winners sometimes come from behind and win it in the summer, when the DiSars spotlight is off them. Hernandez’ leading total is so low that this seems especially likely this year.

Andy Dirks (above) is the closest active challenger, with 49 walkless plate appearances through Sunday. Better, Dirks is in that Jeff Francoeur 2006 zone where he’s not only avoiding walks but hitting well, reinforcing the approach. (That GIF up there? He got a single on that pitch, which was more than foot outside and well low.) Dirks had a respectable minor-league walk rate, though it was trending downward before he reached the big leagues and he drew just 11 free passes (one intentional) in 235 plate appearances last year.

Three-ball counts: 8
Previous DiSars best: In 2011, his only other season, he walked in his first plate appearance.
Beastie Boys lyric about his chances:

There is also Clete Thomas, who had 29 walkless plate appearances before he was sent to Triple-A this weekend. These are three super-funny jokes I just made up about Clete Thomas:

Thomas actually has pretty average walk rates in his major- and minor-league careers, so once he returns to the majors, he’s probably not long for this list. But Thomas does swing a lot more now than he did as a younger man, and he’s in a pretty bad place as a hitter: besides the lack of a walk, he has struck out in 16 of his 29 plate appearances.

Three-ball counts: 4
Previous DiSars best: Walkless in the first 23 plate appearances of his career, in 2003.
Beastie Boys lyric about his chances:

Josh Donaldson, at 32 plate appearance, is a surprising candidate, as he has a 12 percent career walk rate in the minors. (Kevin Youkilis has a 12 percent walk rate in his career in the majors.) But he is also halfway to Hernandez, and if I were a pitcher, I would certainly throw him strikes, so here he is. A number of A’s have pushed the no-walk boundaries this year. Josh Reddick didn’t walk until his 63rd plate appearance, which puts him atop the AL DiSars leaderboard. Kurt Suzuki walked for the first time in the fifth game of the year, but has since gone 80 plate appearances without drawing his second. Luke Hughes, claimed off waivers in late April, has a still-active DiSars streak of 24 plate appearances. Has anybody yet written an overly simplistic obituary of Moneyball based solely on the A’s OBP? If not, boy oh boy I sure could make my name in the trolling business!

Three-ball counts: 2
Previous DiSars best: Walked in his 22nd plate appearances in 2011, his only other season in the majors.
Beastie Boys lyric about his chances:

And then there is Welington Castillo, who is only 11 plate appearances into his DiSars run, but I want to give you a dark-horse who could sneak up in August or September. He has walked just once in 45 plate appearances in his major-league career, and a 7 percent walk rate in the minors is awfully promising, or the opposite of promising. (Jeff Francoeur, a two-time NL DiSars champ, walked in 6 percent of his minor-league plate appearances.) While his plate discipline has improved over the past two years, which makes his run even more fantastical, we have referred to him in these pixels as “hacktastic,” “a bit of a hacker,” and “hack-happy,” so there’s a DiSarsian pedigree here. (There are also better examples of him chasing than the GIF above, but in the GIF above something flies off his bat or hand when he swings and lands a few feet away, and what the heck is it?)

Well that was funnish. Other players with zero walks to keep an eye on:

Obviously, all Beastie Boys lyrics above are fake. So long, MCA.

You need to be logged in to comment. Login or Subscribe
Screamingliner
Looks like Castillo broke one of those rubber thumb gaskets a bunch of players use.
Reply to Screamingliner
kcshankd
I love the way Castillo looks at his bat after his swing-and-miss, I can hear the internal dialogue: 'Oh, yeah, a bat. I thought I was swinging an oar there for a minute. Oops.'
Reply to kcshankd
MindRevolution
I've always felt the DiSar should go to the player who goes the longest without a walk period, not just the longest to start his season.
Reply to MindRevolution
dethwurm
That Jeri Ryan joke was awful.

Gold Jeri, gold!
Reply to cdmyers
bhalpern
If he wanted to walk, heâ€™d go by McCann, Thomas.
Reply to bhalpern
ChoppertoChipper
I thought the Harrison Beastie Boy lyric was a comment on the cleaning skills of Saved by the Bell's Screech. What is Dustin Diamond's ceiling? Is it a poor man's Pauly Shore?
Reply to ChoppertoChipper
SaxonB
Incredibly surprising there isn't an Angels player on this list. However, currently they have 5 (six of you include Trout, but small sample size) with an OBP under .300. And only one player on the squad as more than 10 BBs. oof.
Reply to SaxonB
sandriola
Dirks is out. He just walked in tonight's game.
Reply to sandriola
km9000
G - A - R - Y to the D.
My beats are bigger than my OBP.
To get knocks, y'all, ya can't walk, y'all.
Ya gotta hop, y'all, outta your socks, y'all.

Your sucka PAs, can't hack it like DiSar.
You're trottin' 90 feet? Well you won't get too far.
So why look when you can swing away?
I got more whiffs than a Sommelier.