There are downsides to having a primary team, like developing tunnel vision to the other divisions. The Yankees guaranteed Jesus Montero would make fewer trips to Tropicana Field when they traded him to the Mariners. With only seven scheduled visits on the season, Montero demands attention when he plays at the Trop. This isn’t my first tango with Jesus, though my strongest memory entailed Joe Maddon intentionally loading the bases so as to face Montero with nobody out. (He would ground into a double play, albeit one that scored a run.) The Montero intrigue intensified with Matt Moore taking the mound on Tuesday night.

Sam Miller wrote about Moore facing Miguel Cabrera for the first time earlier this season. I made a joke to Ben Lindbergh during Moore’s first tangle with Albert Pujols along similar lines.  Montero-Moore is different from those two encounters. This isn’t a case of hotshot versus established superstar, but rather hotshot versus hotshot. In five years, Montero-Moore might be a matchup of all-world caliber ballplayers. Or it might be a battle of former busts playing out the string in Triple-A.  Nobody knows. Either way, I took notes to commemorate the occasion:

Montero smoked Moore’s fastball about 403 feet into the center field wall. The ball was inches away from being a home run, but Montero’s slowness and B.J. Upton’s strong arm limited the big guy to one base. In pictures:

By Montero’s third trip, Moore had exited the game. He had struck out seven batters in five innings, but a messy pitch count led Maddon to insert Burke Badenhop. Badenhop is good for what he is—a groundball-getting situational reliever—but nobody will remember where they were when Montero took hacks against him for the first time.  Good thing, too, because their encounter lasted one pitch:

Montero-Badenhop, Take One
Pitch One: Hits an 88-mph fastball up the middle for a single.

Montero got one more at-bat on the night, this time against Joel Peralta. Again, Peralta is a fine pitcher, but in five years he won’t be in organized baseball. Nevertheless, Montero isn’t picky:

Montero-Peralta, Take One
Pitch One: Takes a 79-mph curve for a strike
Pitch Two: Hits a 80-mph splitter down the left field line for a double

That would be a 4-for-4 night and the first four-hit game of Montero’s major-league career. (Montero had a three-hit game against the Rays last season—I bring out the best in him.) Making broad observations after one game, 15 pitches, and eight swings is nonsensical, so I took in a few more Montero’s plate appearances, about 17 in total. During those plate appearances, I witnessed Montero hitting two home runs. One came against Wade Davis the night before, as Montero took a pitch fading out of the zone and hit it 402 feet into right-center field. On another occasion, Montero hit a 91-mph fastball from Ricky Romero over the left-center field wall: 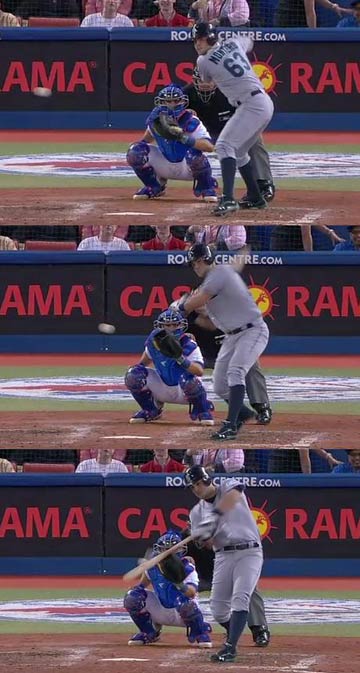 The above set of images provides a visual on Montero’s impressive bat speed. Either Romero’s fastball is over the plate or close to it before Montero’s hands begin bringing the bat forward. Yet, in a split-second, the bat is into the zone and the barrel is on the ball. It’s a display that tells you everything about Montero’s wrists and hands.  When Jason Parks wrote about scouting hitters, he included the motto: The better the hands, the better the hitter.  Montero is a highly dexterous hitter.

Something else I grew to appreciate about Montero is his hitting style. Montero is a hitter with power, not a power hitter—Kevin Goldstein made the distinction and it works. You won’t see Montero swinging out of his shoes in order to generate his power. He doesn’t have to. Instead, he keeps a balanced approach that has some seeing a future .300 hitter.  More questionable is Montero’s walk rate. Though he seems to have an idea about the zone, he enjoys swinging the bat and has enough plate coverage to terrorize the outside corner.

Montero’s age (22) and position are also worth mentioning. An injury to Miguel Olivo and Eric Wedge’s disdain for John Jaso left Montero as the Mariners’ primary catcher. Montero looked as poor as advertised behind the plate, from his mechanical flaw (he leaves his throwing hand in front of his body), to having balls ricochet all over, to a slow release that mitigates his arm strength. It wouldn’t be too surprising if the Mariners decide a permanent move to first base or designated hitter is in order sooner than later. Not just because of his defensive flaws, but because his body needs to stay healthy and his bat needs to stay in the lineup.

You need to be logged in to comment. Login or Subscribe
sportspopery
I watched his work behind the plate the other night, and he just doesn't seem to trust his hands. He was stabbing at the ball and setting up late, almost as if he was more concerned about actually catching the ball than setting up a proper target for the pitcher. To be fair, both Wilhelmson and League were very wild, and he actually did a decent job of keeping bouncing balls in front of him. If his hands are problematic, though, what does that do to his future defensive profile? It seems keeping him as a DH/backup C will serve his and the Mariners' interests going forward, as first base will exploit his greatest weakness at the possible expense of his greatest talent.
Reply to sportspopery
RJAnderson
Fair assessment. I would offer that Montero could benefit from playing first over catcher not on the grounds of improved defensive play, but just from a health perspective. Also, Iâ€™m worried that heâ€™s going to suffer a broken hand at some point due to his hand positioning.
Reply to RJAnderson
NJTomatoes
One potential problem is, he's hitting far better when catching than when DHing.
Reply to NJTomatoes
RJAnderson
We are dealing with a small sample there. I would grant that some batters might find it more difficult to transition to designated hitter than others. Montero might be one of those hitters. As an extension of thought, I wonder if younger hitters in general experience a harsher DH effect than the veterans.

Reply to RJAnderson
Schere
The three stills of one of his swings are great. You make the point about his hands, but note also how remarkably still his head is.
Reply to Schere
rawagman
Further to that, it looks like he is doing a good job of keeping his hands in - not extending to get his power. That should allow him to make better adjustments to various types of pitches and leave him less likely to be exploited.
Reply to rawagman