Cycling is, above all, a team sport, and the tactics involved are as complicated as those of baseball or basketball. "Ever try to explain the infield fly to somebody?" Armstrong asked me when we were in Texas, where he lives when he is not racing or training in Europe. –New Yorker, 2002

If you know very little about baseball, you still probably know that the infield fly rule is something complicated. It's trotted out regularly to differentiate between people who know about baseball, and people who don't know about baseball. It's the baseball equivalent of solving a Rubik's cube, or doing the Sunday crossword puzzle in ink—a shorthand cliche that is accepted by nearly everybody. It is used to demonstrate the silliness of baseball. It is used to insult women, and it is also used to prove a woman's bona fides.

The great columnist Jim Murray, on the passing of Casey Stengel: "Well, God is getting an earful today. I hope he understands the infield fly rule."

But this is all insane. The infield fly rule is a very simple rule to understand. It is, I imagine, understood by even the youngest serious baseball fan, and it is easily explained to a casual fan in 25 words:

When there are two possible force outs and fewer than two outs in an inning, a catchable infield pop-up in the infield is automatically ruled a catch.

And the reason for the rule is explained in even fewer words:

An infield fly call takes away the fielder's ability to record more outs by dropping a ball than by catching it.

The save rule is arguably too complicated to explain easily. The balk rule is utterly impossible, and if people want to use the balk rule to casually insult female baseballs fans, my objections will be strictly limited to the chauvinism of it. But If there is anybody who thinks this rule is too complicated, they don't have an issue with baseball, but with simple listening comprehension. It's just not that hard! 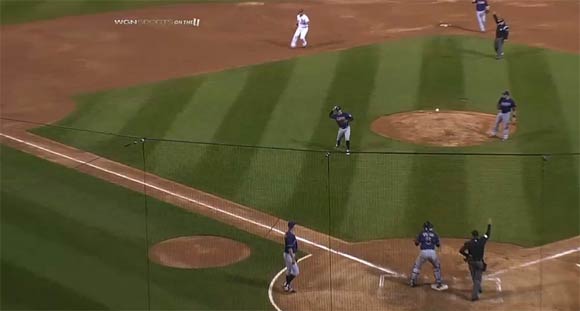 How I hate him.

You need to be logged in to comment. Login or Subscribe
bigdonut
In 2003, the Giants scored on an infield fly where the ball wasn't caught. See the bottom of the 5th. http://www.retrosheet.org/boxesetc/2003/B05130SFN2003.htm

Reply to bigdonut
lyricalkiller
The irony of this post is that I didn't do a very good job of describing what Adam Dunn did. (Clarifying it now.)
Reply to lyricalkiller
raquino
outstanding Peanuts homage.
Reply to raquino
kjgilber
An ump called the infield fly rule in my son's little league game this past weekend. The poor ten year old who hit the ball burst in to tears... "But what did I do wrong?!".
Reply to kjgilber
bigredsun
While I understand the rule easily, I don't understand why it exists. I've always thought a batting team who pops up in the applicable situation should be deservedly punished. The fielding team should have the opportunity to record multiple outs by taking the risk of not catching the ball. How is this different from a ground ball? It's a needlessly fabricated rule that takes away from the simplicity of the sport.
Reply to bigredsun
km9000
I'm sure there's a good reason not that I can think of one. Maybe it just looks cheap to drop it on purpose?

But it's not without risk. There's no guarantee that it won't backfire and put the defense in a worse position (sort of like why you actually have to throw four times for a IBB).

I don't know about simplicity though. Even without the rule, there's still a lot of arcane stuff. But not quite as bad as football if you ask me.
Reply to km9000