Jon Lester and Jake Peavy engaged in a pitcher’s duel on Saturday afternoon. Officially, Lester and the Red Sox won 1-0, but Peavy stole the show as he threw back-to-back complete games for the first time in his career. All told, Peavy’s line through five games moved to 37 2/3 innings pitched, 21 hits allowed (one home run), seven runs against, and 28 more strikeouts than walks.

The temptation to label Peavy’s April as “vintage Peavy” is as strong as it is inaccurate. Peavy no longer sits in the mid-90s (he touches 94 mph) and he no longer strikes out a batter per inning. But Peavy is still a bulldog on the mound, his tenacity evident in both his pitching and in his unwillingness to be forthcoming about injuries. A certain air of invincibility is required in order to make it as a major-league pitcher; however, being a pertinacious pitcher can have its drawbacks—like being in denial about lost velocity and continuing to ride a subpar heater.

Judging a fastball by its velocity is like judging a woman by the clothes that she wears—both are wrong, and both wrongs are committed often. Take Peavy’s efforts on Saturday. Put yourself in his cleats. What would you throw if you knew you had to face such hulking left-handed hitters as David Ortiz and Adrian Gonzalez without your best fastball? Where would you concentrate on throwing your fastball when you did throw it? You probably said that you would throw more soft stuff and keep the hard stuff down and away. Not illogical, but not how Jake Peavy, professional bulldog, went about his business: 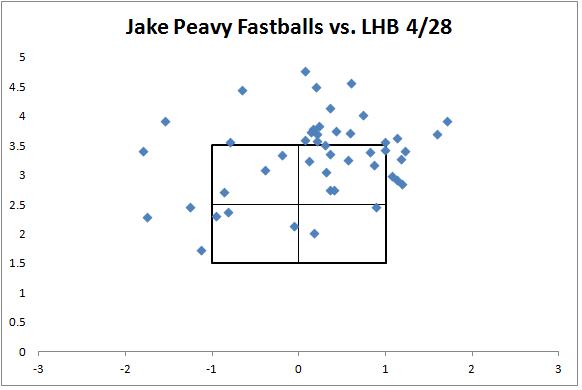 Peavy’s eagerness to pitch up in the zone with his fastball is not a one-start gimmick, but a season-long attraction so far. This tidbit helps to explain why Peavy owns the majors’ lowest groundball rate (24.5 percent) despite never before finishing a season with less than 40 percent groundballs. Everyone knows to approach radical shifts over small samples with caution, yet Peavy’s new territory is coming with a new approach that should lead to more contemplation and fewer dismissals.

Consider the tables below, wherein Peavy’s 2010-2011 and 2012 fastballs are charted into one of four quadrants:

Peavy is noticeably working more to one quadrant—glove-side, high—in 2012 than in the previous two seasons. That means going up and in on lefties and up and away on righties. The increased flyball rate shouldn’t come as a surprise, then, and neither should the knowledge that Peavy’s 16.3 percent pop-up rate marks a career high (his previous best, 12.6 percent, came back in 2002); working the heater inside on left-handed batters is leading to more jamming. Peavy had a multi-year True Average Against of .251 versus lefties and .237 versus righties entering the season; so far, lefties are hitting .175/.200/.238, slightly worse than righties.

While Peavy’s increased flyball and pop-up rates are likely to have some staying power, one area that may change is his ability to prevent extra-base hits against lefties. Only two batters, Endy Chavez and Ryan Sweeney, have managed to rack up multiple bases off a Peavy fastball this season. It is worth noting that neither seemed like a poor pitch on Peavy’s part, as the images below support: 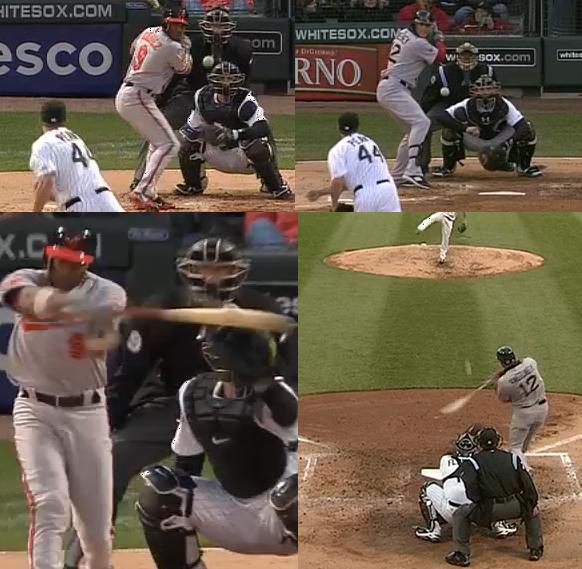 For added context: Chavez falls into an 0-2 count before tomahawking a high heater into the right-field corner. The pitch before, a high in-zone fastball, saw Chavez take a hapless hack. Given the result, it’s likely that Chavez was thinking high fastball again. As for Sweeney, Peavy had struck him out on an inside fastball back in the first inning. Peavy went to the well again, and got Sweeney to break his bat. The only negative is that Sweeney hit a blooper that a diving Gordon Beckham just couldn’t reach. (Hawk Harrelson decreed Beckham’s play as “the definition of gutsy.”) Peavy likely walked away disappointed, but not discouraged by the results at hand.

Perhaps the biggest question about Peavy is not how the league adjusts to his new approach or how he counters, but rather if he stays healthy long enough for those issues to become concerns. Peavy’s 35 starts over the past two seasons are just one more than he made during his 2007 season. The injuries have stayed away so far, which is more than left-handed hitters can say about Peavy.

Thanks to Bradley Ankrom for research assistance.