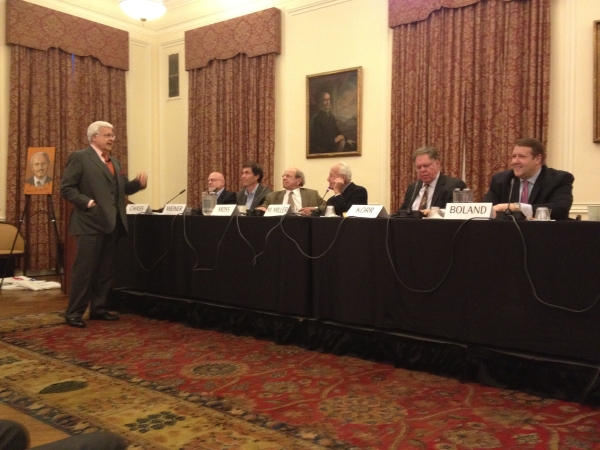 Marvin Miller is a throwback to a past era—maybe two or three eras ago. It’s rare these days to hear a well-dressed economist refer to himself as a lifelong “trade unionist.” It’s rare to hear someone earnestly compare the federal minimum wage to the minimum salary in baseball. But perhaps it’s not so rare these days for someone to decry as excessive salaries paid to CEOs. Besides, what would you expect from a man who turned 95 two weeks ago if not something of a throwback?

Miller spoke Tuesday evening as part of a panel marking the 40th anniversary of the 1972 baseball strike and in his honor at New York University School of Law. His wide-ranging remarks lasted over an hour but focused primarily on what he called the “untold stories” of baseball’s labor history. Miller was joined by former colleagues, academics, friends, lawyers, and baseball fans.

Decades after the events took place, Miller’s impassioned retelling of the formative moments in baseball’s labor relations put the focus of the stories squarely on the players. He was most enthusiastic describing the final vote of the players—during spring training in 1972—on whether to walk out on the season. Miller described how he and his general counsel, Richard Moss (also on the panel), recommended against a strike at a union meeting in Dallas on March 31. Despite his urging, the team representatives voted unanimously (with one abstention) to strike. Thirteen days later, the owners had agreed to the MLBPA’s demands, including increased pensions and salary arbitration, and play resumed shortly thereafter.

Miller underscored the massive victories won by the MLBPA since 1966, when he took the reins of what was at the time a company union. In 1967, he noted, the minimum player salary was $6,000. In 2011, it was over $400,000. In 1967, the average player salary was $19,000. In 2010, it was $3.1 million. According to NYU Sports Management Professor Robert Boland, Miller and the MLBPA are responsible for the creation of modern sports business. Also present for the evening were Miller’s two successors at the MLBPA, Don Fehr and Michael Weiner. But Fehr took a backseat to Miller—or rather, he sat in the front row while his successor and predecessor spoke on the panel. And Weiner spoke emphatically about how he carries the legacy of the MLBPA created by Miller and Moss with him in his daily work.

For his part, Moss spoke about the early days of the MLBPA just after he and Miller arrived fresh from the United Steelworkers’ union. He related the story of the meeting in which the players, led by Robin Roberts, were planning to tell Miller that he was their pick to run the union. Roberts and the other players wanted to balance Miller’s big ideas with a conservative pick for general counsel—a conservative, politically savvy lawyer from New York named Richard Nixon. Miller politely refused, the players capitulated, and Moss became the new GC. (Nixon, Moss noted dryly, went on to a different job, “which he held for a while.”)

Moss also spoke about Miller’s early attempts to build credibility with the press, players, and owners. The union’s first licensing deals, with corporations like Coca-Cola, allowed MLBPA the money to move into offices in the top floor of the Seagram Building on Park Avenue in New York. Miller’s ability to speak to players in a straightforward fashion—to make complex ideas simple without talking down to people—won him wide respect. The players, Moss emphasized, were essential for the success of the union. He noted the particular importance of Cardinal catchers: Tim McCarver, Joe Torre, and Ted Simmons (who sat in the front row). As part of the discussion moderated by NYU University Professor Arthur Miller, both Moss and Miller spoke fondly of Curt Flood’s selfless decision to challenge Major League Baseball on antitrust grounds despite their legal advice to the contrary.

Murray Chass, formerly of the Associated Press and the New York Times, recalled the first time he met Miller. Asked by the AP to cover a labor agreement reached by the Steelworkers’ Union, Chass attended a press conference given by a young economist on the terms of the agreement. Unable to understand the byzantine details of the labor deal, Chass asked Miller a clarifying question. According to Chass, Miller’s plainspoken explanation was the lede in every reporter’s report the next day.

Historian Charles P. Korr, Professor Emeritus at the University of Missouri–St. Louis, noted that the press at the time liked to refer to Miller as a “Svengali-like figure.” They said it was Miller’s union, not the players’. Meanwhile, the owners convinced many that “that’s just baseball”—that the legal rules governing baseball were somehow sui generis, that the pastoral ideal of a sportsman-owner insulated the game from the vicissitudes of the ordinary rules of business. But according to Korr, the owners’ misguided attempts to resist labor reform were their undoing: “If Gussie Busch did not exist,” he paraphrased Voltaire in describing the former Cardinals owner, “Marvin would have had to create him.” But Korr was quick to acknowledge Miller’s importance for the growth of the union in baseball. According to him, the three most important labor events in baseball history were the decision to hire Miller in 1966, the inclusion of impartial arbitration in the first Basic Agreement, and the 1972 strike.

Everyone on the panel spoke highly of Miller, but it was Miller’s indefatigable enthusiasm that told the story. At 95, he captivated the audience, rattled off figures from memory, and threw himself into his remarks. He was interested not in his own legacy but in ensuring that the story of baseball’s labor history was told accurately and in accordance with the known evidence.

The evening’s event was sponsored by NYU’s Center for Labor and Employment Law. The panel was introduced by the Faculty Director, Dwight D. Opperman Professor Samuel Estreicher, and Ross Davies, Professor of Law at George Mason University, Research Fellow at the Center, and a member of SABR. Davies unveiled a new portrait of Marvin Miller that will hang in the United States Supreme Court, alongside a portrait of Justice Arthur Goldberg, a longtime friend of Miller’s. The portrait was also commemorated in the form of a baseball card, reproduced below: 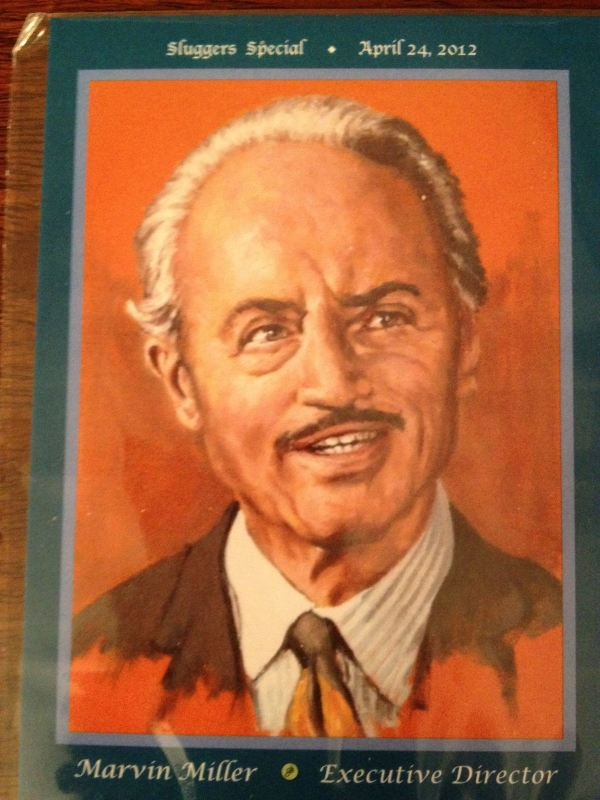 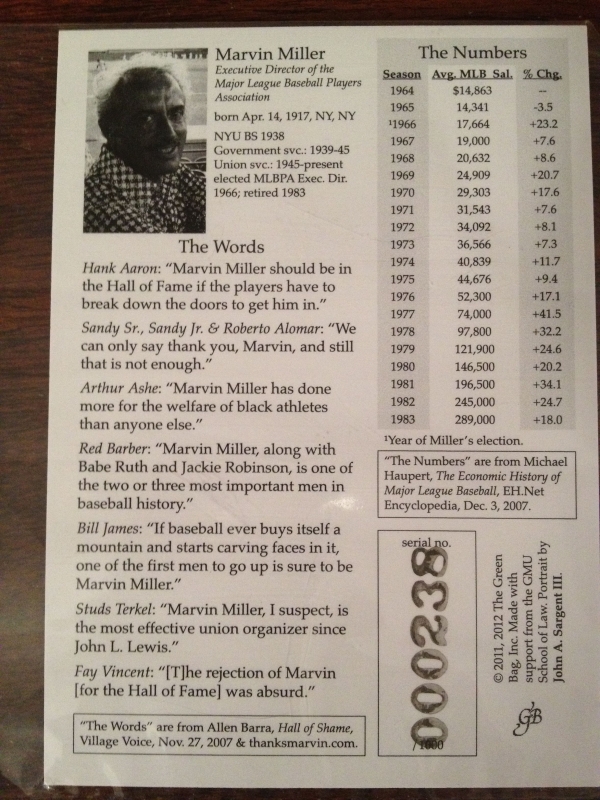 You need to be logged in to comment. Login or Subscribe
tmangell
Tommy, fantastic article. It should be required reading for every major league player. As a Redbirds fan, I'm especially proud of McCarver, Torre, and Simmons (who should be in the Hall of Fame) and their leadership not only to improve the working conditions of their colleagues but also to improve the playing career and post-playing lives of pro athletes in the past 40 years.
Reply to tmangell
sam19041
Great stuff, Tommy. Thanks for sharing.
Reply to sam19041
edwinblume
For all he accomplished, why is Miller not in the Hall of Fame?
Reply to edwinblume
tbsmkdn
http://www.murraychass.com/?p=2597
Reply to tbsmkdn
jhardman
Excellent article. Please keep sharing more jewels like these.
Reply to jhardman
doctawojo
I was lucky enough to see Miller at an event at Smith College about ten years ago. Bob Costas was there promoting "Fair Ball" (and his voice is as insanely perfect in person as it is on the air) and the panel also included Andrew Zimbalist, Roger Noll (which makes quite a collection of sports economists), Clark Griffith (who my memory holds as an entirely reasonable person), and Randy Vataha.

Miller, who would have been something like 84 at the time, was as combative as ever, challenging Costas's assertions that too much free-agent movement was hurting baseball, among others. (Miller pointed out that players changed teams just as often before free agency -- it was just entirely on the owners' terms.)

I walked into that event, I'm a little sad to say, excited to see Costas and entirely sympathetic to his arguments. I walked out, though, a full-fledged convert to Marvin Miller's side.
Reply to doctawojo
jnossal
"Lords of the Realm" by John Helyar, essential reading on the history of the business of baseball and what Marvin Miller meant to the players.
Reply to jnossal
WaldoInSC
The feckless Bowie Kuhn is in the Hall of Fame and his personal tormentor Marvin Miller is not. As long as that's true, the Hall will remain irrelevant.
Reply to WaldoInSC