This week’s Three Best Pitches Ever Thrown This Week, which technically covers two weeks, will be narrated by a guy on a first date trying to impress his date with all his awesome baseball knowledge. Guy is sitting directly behind home plate, so he has an excellent view of these pitches, and a little bit of rib sauce on his lip.

No. 3. Jeremy Affeldt’s curve against Josh Thole, April 20.
So this guy Jamie Affeldt used to be a starter but now he’s a reliever. He’s really, really good. A lot of people wouldn’t think he was that good because he doesn’t have many saves, but saves are an antiquated way of measuring relievers, and let me just tell you Affeldt is really good. He should probably be the closer now that Brian Wilson is injured. Brian Wilson, do you know that guy? Oh, really? He’s the guy with the beard? Oh, come on, you have to know the guy with the really big beard and he was on all the Taco Bell commercials? No, it’s not a big deal, I’m just surprised you haven’t heard of him. Even my mom has heard of him! I’m not yelling. I’m just saying, he’s a pretty big deal. It would be like if I hadn’t heard of Susan Faludi or something. Oh my gosh did you see that pitch!

Yeah, see, I told you he’s really good. Watch it again, and this time watch real close at the very end:

Did you see it? Here, Let me pause it: 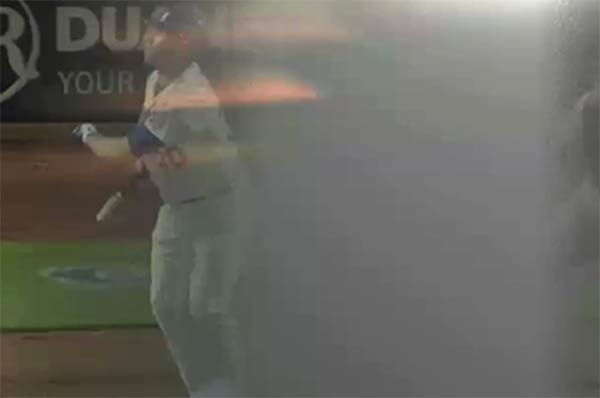 Yeah, that’s called the Kill Screen. If a pitcher really destroys a batter, then a gray cloud of disease and pestilence comes and engulfs the batter. In a day, his fingernails will start to turn brittle, and in a week his teeth will fall out. By the All-Star break, he’ll be dead.

2. Johan Santana’s changeup against Emilio Bonifacio, April 24.
I actually got Johan Santana on my fantasy team this year, and he’s absolutely carrying me. I got him craaaaazy late, like the 20th round because he missed the whole year. Pretty much every year I don’t draft any pitchers until the ninth or 10th round because you can get such good value in the middle or later rounds. So my rotation this year is Santana, C.J. Wilson, Chris Sale, I had Francisco Liriano but I already cut him, which is one of the reasons these high-upside fliers are great, you just chop ‘em if they don’t help you out and then you pick up somebody awesome from the waiver wire. So I cut Liriano, and I picked up Kyle Lohse, who is on the Cardinals and is just totally having this breakout season. I’m going to try to trade him, actually, if I can. Some idiot will give me a slumping hitter for him because he’s doing so well, so I’ll try to get Jose Reyes maybe for him. So Santana, Wilson, Lohse, uhhhhhh who else? Oh, I have Cliff Lee which normally I wouldn’t get him because it was the fifth round but he was like the 14th pitcher taken and at a certain point you can’t not take him, you know? So Santana, Wilson, Lohse, Lee, Brandon Morrow, Trevor Bauer who hopefully will be up soon because he’s already way better than Collmenter, and … uhh, that’s six and I have seven. Oh and Sale. So those are my starters, and I’m killing everybody in pitching even though I barely drafted anybody in the first 10 rounds. See what I mean? Emilio Bonifacio could run faster than that pitch el oh el. Santana is KILLING it. I wonder if I could package him with Jim Johnson and get Jose Bautista.

1. Yu Darvish two-seamer (?) against Raul Ibanez, April 24.
I’m pretty into Japanese baseball. Pretty much all baseball, and really anything international, I’m into. A lot of people don’t follow Japanese baseball because you have to wake up at 2:45 a.m. and find an illegal stream of the games. But I hardly ever sleep anyway, because I’m so Type A and I have big ambitions, so I’m usually awake and I watch those guys all the time. I knew about Yu Darvish wayyyyy before the rest of America. A lot of people think he throws seven or eight pitches—a pitch is like a fastball or a curveball or a oh ok I was just making sure you knew. Anyway, really I’ve seen him throw no fewer than 34 different pitches. He throws a curve, a slider, a straight change, a vulcan change, a two-seamer, a four-seamer, a one-seamer, a sort of modified three-and-three-eighths-seamer, a shuuto, a slangeup, a shaangeup, two knuckleballs (one with his fingertips, the other he kind of flips off the back of his hand), a forkball, a screwball, a gyroball, a gyrochange, a knucklechange, splitfinger, a knucklesplit, there’s one that he bounces off the ground that gets craaaaazy spin, he sometimes throws a slo-pitch softball pitch, and he throws one they call the Marvin Gaye that’s really hard to explain, he throws a dropball, he throws a cut fastball, a cut changeup and a cut Marvin Gaye, a palmball, he does not throw a slutter, but he does throw a fosh, he throws this frisbee pitch that he aims at the bat so when the batter ducks out of the way it hits the bat for a foul ball, and he throws a few more left-handed. He’ll really throw any pitch in any count, too. That’s what makes him so good.

So that looks like his slow-motion curve, really devastating pitch, way tougher to hit than his regular-speed curve. But I’m not sure why that wasn’t strike three. Ibanez clearly swung and missed … I don’t think he got a piece of it … he should be out but … ohhhhh I think I know what happened. See how the catcher and batter are looking at the ball all funny? 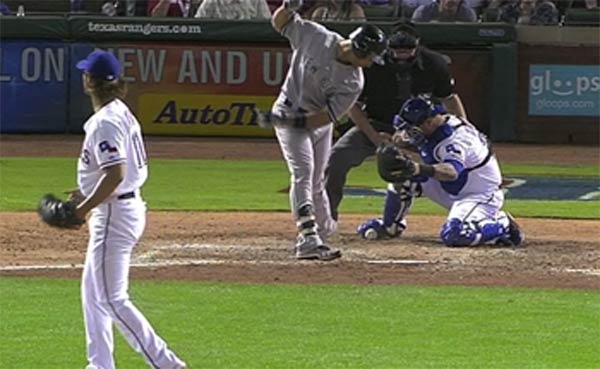 Yeah, I think what happened is Darvish threw his bisected curve. It’s like a curve, but it’s only half a baseball. He literally cuts the baseball in half and throws it. Gets craaaazy spin on it, and it’s totally legal in Japan but over here it’s not legal. So I guess the umpire didn’t count that pitch.

And I honestly have no idea what that was.

You need to be logged in to comment. Login or Subscribe
jj0501
I think that last was was an "outie" as opposed to an "innie". It was taught to him by Eddie from King & his
Court. Yu is still working on the "upshoot", he may save that for Yankee Stadium.
Reply to jj0501
monkey
If I know anything about women, it's that the entire gender loves hearing about my fantasy team
Reply to monkey
CeeAngi
I'm female and I tend to annoy even myself when I bring up my fantasy team, so yes...I'd say that point probably stands and transcends gender, even.
Reply to CeeAngi
sam19041
Awesome.
Reply to sam19041
Deadheadbrewer
LOL! And I only use that initialism in the literal sense!
Reply to Deadheadbrewer
nickojohnson
This is fast becoming my favorite weekly segment on BP. Keep 'em coming!
Reply to nickojohnson
moonlightj
Kill screen....awesome
Reply to moonlightj
sam19041
Can't do +1 on Jason's comment, but agree completely.
Reply to sam19041
bmmcmahon
It goes for men too, of course--I hate listening to my friends tell me about their fantasy team. I only tolerate it because I know it gives me license to then bore them to tears talking about my own.
Reply to bmmcmahon
lyricalkiller
I'll give you three minutes for your fantasy team if you let me tell you about every hand of Texas Hold 'em I have ever played
Reply to lyricalkiller
onetimeforall
Fantasy teams, poker hands, golf shots, high school sports accomplishments, things your baby does...
Reply to onetimeforall
monkey
Let me tell you about this one time I was playing poker out on the golf course, with my baby, when I found out half of my fantasy squash team had gotten injured.
Reply to monkey
brownsugar
Crap, did you have Mohamed El Sherbini on your fantasy team too? He's not going to be able to hit a decent rail shot for months.
Reply to brownsugar
gilgamesh
Nothing worse than a Bad Beat to a Good Closer.
Reply to gilgamesh