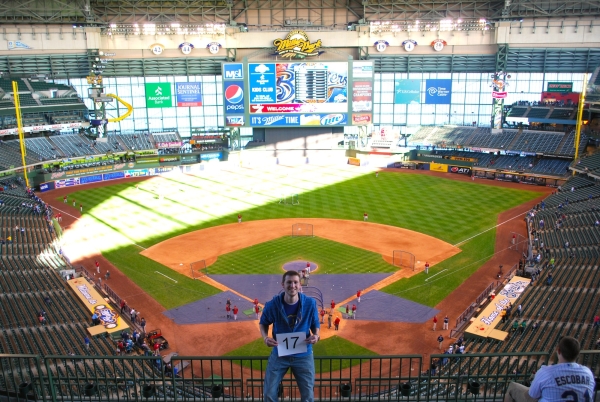 Setting up a picture can be serious business. Are those seats in the way? How far back must you sit for the camera to capture the whole field? Just how badly is that sunlight going to ruin things in the background? Why is that guy in his seat already, trying to ruin the shot? If I sit on this railing, will I look like I'm, um, "squatting" too much?

Eventually, Ben Rouse sets things up the best he can, and we take the picture. Ben sits on the railing in Miller Park's upper deck directly above home plate, wearing a Brewers t-shirt and sweater. The Astros are busy taking batting practice below, and the sun from Miller Park's infamous windows is streaming in. Ben is holding a "17" sign, and it has nothing to do with Jim Gantner.

The Brewers’ opponents this Monday night in Milwaukee are the hapless Houston Astros. Zack Greinke will be starting for the Brew Crew, looking to extend his 19-game unbeaten streak at Miller Park. At 7-9, the Brewers are hoping Greinke will help them move back above .500 before the month is out. The crowd is actually pretty large for such an unremarkable night in April (the Brewers will later announce a paid attendance of 36,291). Even so, it's a safe bet that no paying fan has seen as much Brewers baseball this year as Ben. It is the 17th game of the Brewers season and the 17th game Ben Rouse has attended, including a road trip to Chicago and Atlanta earlier in the month. The picture we took at the start of batting practice is just one part of a collage Ben is creating on his mission to see all 162 Brewers games this season.

Ben is a 25-year-old Wisconsin native and, unsurprisingly, a very big Brewers fan. In spring 2007, shortly after witnessing Ben Sheets' masterful Opening Day start, the then-20-year-old Rouse was diagnosed with Acute Promyelocytic Leukemia (APML) and was immediately admitted into the hospital. He spent the next five weeks undergoing treatments, fighting the disease, and losing 35 pounds. Throughout the summer, Ben attended Brewers games (even driving down to Texas and Detroit for some) and kept receiving treatments, hoping to beat it into remission. Eventually, after a year of ever-changing treatments, that goal was reached.

But the fight wasn't over. As Ben went to more and more games in the Brewers' wild card season of 2008, he continued with medical treatments designed to keep the leukemia away. Doctors even recommended a bone marrow transplant, but that was nixed by his insurance. In 2009, after another full year of maintenance therapy, the leukemia was found to have relapsed. It was finally time for a transplant.

There are two types of bone marrow donors: adult donors, of whom there are roughly 10 million registered nationwide, and umbilical cord blood unit donors. With the help of "Be the Match," the National Marrow Donor Program, Ben found a match among the cord blood registry.  The marrow was transplanted in the fall of 2009, and he's been healthy ever since.

It's not as easy as you might think, going to every game in a baseball season. You have to worry about getting sick, your car breaking down, spending time with your loved ones, traffic to and from the ballpark, eating healthy, oversleeping, missing important events, baseball fatigue, dealing with drunken louts day after day after day, rain delays, near-freezing temperatures and winds, hearing "Cotton-Eyed Joe" too many times to count, the wave, and countless other annoyances and dangers that could threaten to derail your goal at all hours of the day. And that's just on the homestands.

When the team goes on the road, the difficulties are multiplied. Not only do you have to worry about everything already mentioned, but you also have to worry about getting to your flights on time, the flights taking off and landing on time (or at all), making connections, losing luggage, setting up transportation and lodging once you're there, finding your way to the hotel, getting to the stadium, listening to other fans berate your team, braving new ballpark concoctions, hearing Hawk Harrelson on stadium radios, and more. It may be fun, but it certainly isn't easy.

And when you consider that Ben's ultimate goal is to see as many pitches as he can (he tracks the number of pitches he didn't see at each game—it currently stands at 13 missed pitches in 17 games), it actually starts to sound like a bit of a chore. We all know how stressful it can be during a critical part of the season to make it home in time for first pitch. There's no time to stop for gas or to pick up food at the grocery store. If a friend asks if you're free that night, you say "absolutely not!" Baseball is your focus for that entire day or week. That's the kind of stress Ben will be dealing with all season long. He’ll really be tested in the last weeks of the season, if not before, when the team plays 39 games in 41 days across 10 cities to close out the season.

But, as Ben might say, we should all be so lucky.

At the start of the 2010 season, Ben was feeling healthy and decided to take in the Brewers. A lot of the Brewers. In the club's first 25 games, he went to 19, including series in Chicago, Washington, Pittsburgh, and San Diego. It was trips like this that made Ben feel like a 162-game season was possible. After saving money all year, he decided to go all-in on the 2012 season and make it his mission to see all 162 Brewers games in person while helping to raise money for the program that helped save his life.

Ben isn't doing this alone. After determining that he had the funds for game tickets, airfare, hotel reservations, and everything else he would need over a six-month season, Ben approached the Brewers, thinking that they might like to know that one of their fans was doing something so worthwhile. The team liked the idea so much that they decided to help. They upgraded Ben's 20-game pack into a full-season plan and have promised him one ticket to all 81 road games as well. The Brewers have also pitched in with a small daily stipend for food and some team apparel to wear at games.

As generous and helpful as the Brewers' contribution is, the biggest impact their support has will likely be in getting the word out for the "Be the Match" registry. Donor matches for bone marrow transplants are much more complicated than, say, blood donor matches, requiring things to be aligned on the DNA level. With 10 million adults in the database, patients like Ben in need of a transplant still have a difficult time finding a suitable donor. By working with the Brewers and their various television and media outlets, Ben can bring word of the need for donors to millions of people who may never have seen it otherwise.

Monday's game starts out well for the Brewers. After a quick home run from Houston's Jed Lowrie, Milwaukee takes an early 3-1 lead that seems to be more than enough for Greinke. In six innings, he strikes out nine while allowing only two runs and exits with a 5-2 lead. Ben watches the game with good humor, laughing at people dancing in the stands, alertly watching for foul balls from his prime seat in the loge level behind home plate, and otherwise looking like a man who might never tire of seeing nine innings of baseball six to seven times a week.

Even when Jose Veras threatens to blow his four-run lead and send the game into extra innings, Ben laughs and enjoys it, worrying more about whether he'll be able to squeeze in a bathroom break than what the blown lead might mean. In the end, John Axford strikes out the side for his 46th consecutive save, and the Brewers go home a winner. Ben heads out too, an expert at getting out of the park early for his 70-mile drive home. It's something he'll be doing 70 more times this season (and another 75 more times on the road). That's a lot of baseball for you and me, but Ben Rouse is up for it.

To follow Ben's journey, visit his blog. You can also make a monetary donation to Ben's "Be the Match" fundraiser here. Click here for more information on joining the bone marrow registry.