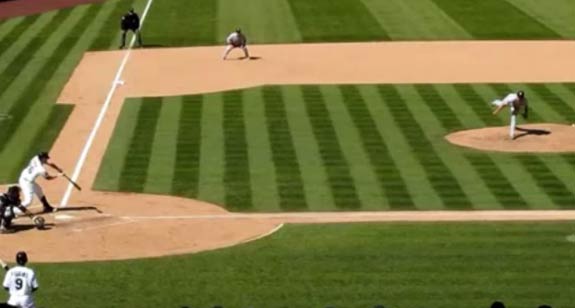 Well, if this is legit, that settles that, am I right? It's clearly [muffle muffle muffle]

Based on the bat's shadow, the angle of Safeco, and the latitude of Seattle, the only way this could have been a strike is if it occurred between 1:42pm - 2:15pm PDT.

I think MLB can safely place an asterisk next to this one.
Reply to mkvallely
holgado
MLB official rules contain no definition for a checked swing, it's a judgment call for the ump. Seems from this photo that Ryan's bat crossed the front of home plate, regardless of whether it ever went past parallel with it or whether he broke his wrists, and that's an oft-used standard. So it's a more than defensible call. Plus, Ryan deserved no benefit of the doubt after obnoxiously taking his time getting into the box on those last few pitches (if you watch the replay, you'll see the ump clap his hands twice on the first of the two 3-2 pitches while Ryan grabs dirt and adjusts his batting gloves).
Reply to holgado
edman8585
Yep... there's no rules for bat location, half way, etc. It's all 100% based on "umpire judgement"
Reply to edman8585
MattWinks
This probably as disputable as half a dozen balls and strikes calls that could have changed ABs. There is nothing blatant therefore it has to go to the call on the field. I think it is good that there is a level of gray in baseball and everyone knows it, this isn't football where they make a judgement call then review it and make a video judgement call and then measure exactly on the field.
Reply to MattWinks
Oleoay
There are lots of judgement calls in football. Does he have control of the ball? Had the QB begun his throwing motion? False start/offsides? Every penalty including pass interference is a judgement call that takes place before replay. How far did forward momentum take the ball carrier? Heck, even where the ball is spotted is a judgement call. There's tons of "gray" in football.
Reply to Oleoay
kingteen
I think you don't know what a judgment call is, because "how far did forward momentum take the ball carrier" is not one, and neither is false start/offsides. They go look at replay to determine EXACTLY how far the ball carrier's forward momentum took him, or when the QB began his throwing motion. The NFL has larded rules upon rules to take judgment calls OUT of the game. That's why you have nonsense like the "Tuck Rule." So that there's no judgment involved. If his arm was moving forward, he was throwing the ball, period. Even if he wasn't.
Reply to kingteen
Jetson
The bat is through the hitting zone - looks like a strike to me. Heck a lot of guys with inside out swings never break their wrists past the point shown here.
Reply to Jetson
accies
Another interesting aspect of this photo is the large gap between the 3B and the SS.

Reply to accies
briankopec
Armando Galarraga called to say "Yer out!"
Reply to briankopec
jivas21
Exactly - after the Armando Galarraga-Jim Joyce thing last year, there was NO WAY Brendan Ryan was getting the benefit of the doubt there.

Which is fine by me. Tie goes to the guy making history.
Reply to jivas21
pieman1121
I was watching it live with my 14 year old son. We both immediately said "ball four." No way Ryan swung at that pitch. As much as I wanted to see Humber get the perfect game, it seems a bit tainted to us.
Reply to pieman1121
bheikoop
There's no such thing as a "checked" swing. This has been made up over the years and the level to which a player can "check" has increased.

According to ML rules, when a player attempts at a ball, it is a strike.

Show the above picture to 100 people and ask them if the hitter is making an "attempt" at the ball.
Reply to bheikoop
BeplerP
This is true. You can look it up.
Reply to BeplerP
jlong82
They should have the ump stay at home and watch on TV and call in the balls and strikes since it gives such an advantage.
Reply to jlong82
mikebuetow
Baseball could end a lot of arguments by writing the rule so that there is no checked swing call. MLB could say, If the hands go forward, that's a swing.

Of course, then where would Kevin Youkilis be?
Reply to mikebuetow
Nacho999
Could not agree more with Jivas above. Tie goes to the guy making history. You could say this makes up for the Jim Joyce fiasco, but it doesn't. Still, if it's close, you're out in these situations.
Reply to Nacho999
paulproia
Close wasn't good enough for Milt Pappas.
Reply to paulproia
beeker99
I'm with Jivas and Nacho999 - if it was good enough for Don Larsen and the Yanks and Dodgers in '56, it's good enough for me. Tie to the guy making history.

Seriously, have you seen the footage of the last pitch in Larsen's perfect game? Questionable for sure, but the call was "strike three" and that's that. Ditto here.
Reply to beeker99
kcboomer
As Dale Mitchell can tell on a 3-2 count for the final out of a perfect game you had better be hacking.
Reply to kcboomer
kdierman
Let me ask you all this question....

What if the picture above illustrated the bat position of a bunt attempt?? .... the bat is clearly over home plate and the right elbow is far from the body - which only happens during an attempt ...

Not only was this the right call - it wasincredible umpiring by Runge to have the courage and wits about him to make the call quickly and decisively so that the play could unfold...

Had the hitter, who has a reputation as a bad attitude guy, sprinted to 1st base immediately upon the call instead of whining and showing up the umpire - it would have been an interesting play at 1st base.

Reply to kdierman
bigbart
Beating a dead horse, but at least in this forum some people know the rules...

A STRIKE is a legal pitch when so called by the umpire, which---Is struck at by the batter and is missed.

Pretty direct and to the point.

NOTE: The â€œwristâ€ break or bat passing over the front plane of the plate are merely â€œguidesâ€ used by the umpire to make a determination of â€œswingâ€ or â€œno swing.â€

A) It is simply a matter of umpire judgment as to whether or not a batter attempted a swing. There is no such rule or â€œrequirementâ€ that either a batterâ€™s wrists must â€œbreakâ€ or that the bat must cross the front plane of the plate when he attempts to check his swing in order for the umpire to rule it as a swing.

B) Same as the wrist/plane of plate thing above. That is, umpire judgment prevails as to whether the batter actually attempted to strike the ball. Just because a batter simply â€œsquares aroundâ€ to bunt a pitched ball and subsequently leaves the bat in that position does not automatically result as an attempted swing.

Lifted from: http://www.sdabu.com/mistakes_facts.htm
Reply to bigbart
kdierman
The hitters hands are actually over the plate and the ball passed directly under the bat - albeit 20 inches under. But then again thats the venerable Brendan Ryan hitting.
Reply to kdierman
briankopec
I've seen base hits occur on lesser checked swings.

Not sure what the debate is. He struck at the ball. Moving along...
Reply to briankopec
Dodger300
I've got no dog in this fight, but that photo shows clearly that it was a strike.
Reply to Dodger300
Mike888
If the bat is in a position where, if the ball was struck, it could have resulted in a base hit, it is more than defensible for an ump to rule as a swing.

I know that also isn't the "rule" but seems to be a fair standard for this particular judgment call. It would be nice to see more guidance on check swings - one of my few pet peeves about the game.
Reply to Mike888
Dodger300
King Kaufman wrote: "I think you don't know what a judgment call is, because "how far did forward momentum take the ball carrier" is not one, and neither is false start/offsides. They go look at replay to determine EXACTLY how far the ball carrier's forward momentum took him, or when the QB began his throwing motion."

I hope that was written in sarcasm. Officials rarely look at replay on offsides calls. and even if they did, the entire premise of the NFL is based on judgment calls fraught with human error, to wit:

For example, how often does that guy in the chain gang set the chain down within a tolerance of, say 2-3 cm, from where it is spotted on the hashmark 70 feet, 9 inches away, based solely on his line of sight?

Almost EVERY decision in the NFL is based on line of sight being extropolated out by the referees. If that isn't the epitome of using human "judgment" to make the call, I don't know what is.

As a young boy, I remember how my uncle, a professional surveyor, laughed when they brought the chains out for a fourth down measurement. He compared it to leisurely pacing off a mile, then carefully using a ruler to gage the last 12 inches, and trying to claim that one had therefore measured an "exact" mile.

That comment stuck with me all these years. And I hope it sticcks with you, too.
Reply to Dodger300