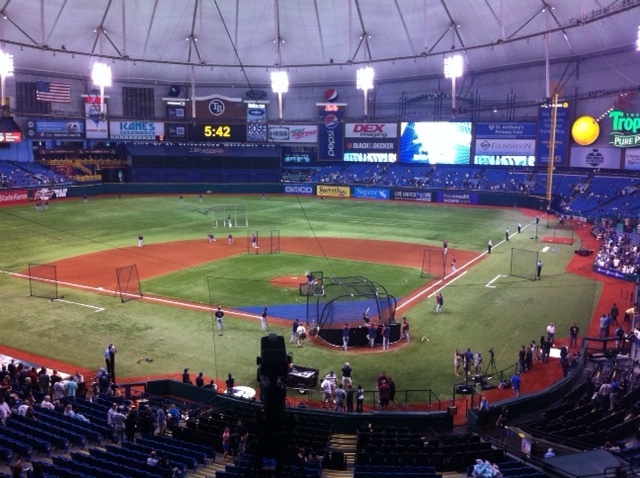 In 2010, the Rays had a league-average bullpen according to 2010 VORP data, but they allowed Rafael Soriano, Joaquin Benoit, Grant Balfour, Randy Choate, Chad Qualls, and Dan Wheeler to depart for free agency after the season, opting to instead rebuild the bullpen on the cheap. The complete restoration of the bullpen led to much consternation in the area, yet the remodeled relief corps finished 2011 with the 12th-most value in all of baseball. The Rays made fewer changes to the bullpen for 2012, bringing in ground-ball specialist Burke Badenhop and the much-maligned Fernando Rodney to the returning mix of Kyle Farnsworth, Joel Peralta, Jake McGee, J.P. Howell, and Brandon Gomes. To say that the 2012 bullpen is off to a slow start would be a bit of an understatement.

The standard pitching metrics pull no punches; Tampa Bay's bullpen ERA sits at an uncomfortable 8.49 on the season, which is more than two full runs worse than the more documented Red Sox bullpen. FIP is not much kinder, as the 4.78 FIP puts the pen as the fourth-worst in baseball behind the Red Sox, Mariners, and Cubs. The bullpen is not at full strength; Kyle Farnsworth has been on the disabled list since the start of the season, which has forced Maddon to alter his approach. Maddon is a non-linear thinker, but he has admitted to liking the comfort knowing what roles are in the pen so he can script how innings will play out ahead of time.

The bullpen has allowed 33 earned runs in 35 innings of work, but the distribution of those runs is anything but even. Josh Lueke and Dane De La Rosa are two of the pitchers the team has used to fill Farnsworth's roster spot in the pen, and both are already back in Durham after working an inning each in the back-to-back blowout losses to Boston. Ideally, neither would have ever been up, but the recently-promoted Gomes was  recovering from off-season back surgery and working to rebuild his velocity in the minor leagues. Both Lueke and De La Rosa were used in the lowest-leverage situations, and neither was effective by any measure. Those two pitchers are responsible for 36 percent of the runs allowed by the Rays bullpen this season, as well as 27 percent of the hits allowed. The struggles led to Gomes being recalled a bit earlier than planned, and he, too, has struggled; he has permitted six of the eight batters he has faced to reach base since he was called up last weekend.

Lost in what has gone poorly for the Rays is what has gone right. Last night was the first game in which the bullpen failed to hold a lead in the final three innings of a game. There have been 18 instances in which the Rays entered one of the final three innings with a lead or tied, and the relievers in those innings have ensured the team left those innings as they began 15 times. Simply put, the lion's share of the damage has come when the bullpen has made deficits grow past a point the offense can make up.

Fernando Rodney's surprise dominance in the late innings (he has already racked up a win and four saves in his first seven appearances) has been a positive, as has Wade Davis' transformation into a bulldog when Maddon brings him in as a reliever. Davis never made a relief appearance in his professional career until this season, but his current five-to-one strikeout-to-walk rate and his velocity to date are better than when he was a starter.

More to come during the game including Maddon's thoughts on the running game, Carl Pavano, and the addition of Brandon Allen.

Some audio clips for your enjoyment:

The game remains scoreless in the bottom of the sixth inning; Carl Pavano and James Shields have matched each other pitch for pitch throughout this contest. Both teams have squandered scoring opportunities, but the Twins' effort was the most egregious; they left the bases loaded in the top of the sixth as Justin Morneau hit a hard liner right into the glove of Evan Longoria, who was playing toward shortstop.

The Rays' fan base takes a lot of abuse for their apathetic support of the team, especially in the early months of the season. Tonight, 31,774 fans showed up for the game, which is the same total for the opening two games of this same series that was played 4/14-4/16 last year. A 65 percent spike in attendance is something to be praised as the team attempts to get over the two million mark for attendance after three straight seasons of declining totals.