I don't know what we'd be talking about today if it wasn't for the Red Sox/Rangers game in Fenway on Tuesday. While the league as a whole combined to hit 30 home runs on the night, those two teams combined for eight of them by themselves. Texas' Mike Napoli led everybody with his two blasts. Other big home runs were hit – Hanley Ramirez, Jose Bautista, Josh Willingham all had notable home runs, for example – but nothing could match what happened in Boston.

Let's get to those trots!

Home Run of the Day: Josh Hamilton, Texas Rangers – 24.03 seconds [video]
It was an 18-3 shellacking by Texas, with nearly the whole team contributing to the lopsided score. The biggest hit of the night, however, came from Josh Hamilton, who absolutely crushed a ball into Fenway's rightfield seats. It was hit so far that it couldn't help but be compared to one of Boston's most famous home runs, Ted Williams' 502-foot blast commemorated by the red seat in row 37 of the bleachers. But while it may have looked nearly as long as the Williams' home run, it was not. Hamilton's shot was measured at 469 feet and fell a number of rows short.

As you can see from this screengrab, Hamilton's home run landed only a few rows above the access tunnel in the rightfield bleachers. 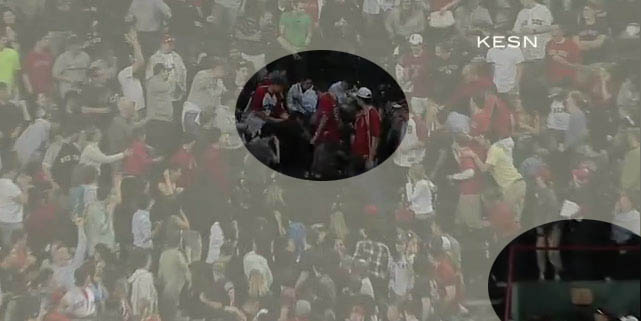 And here's the rightfield bleachers, empty of all fans. Williams' seat should be visible a few blocks of rows below the Ford sign. I've marked the approximate place Hamilton's home run landed. Williams' home run is roughly 16 or 20 rows higher up. And while we know that 16 or 20 rows is a lot, actually seeing it really helps drive that home. 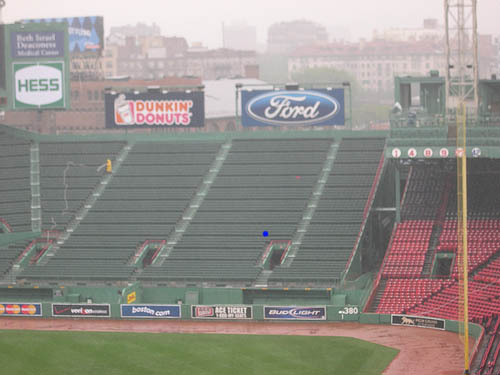 What we should take from this isn't that Josh Hamilton didn't hit a long home run. He did. Second longest of the year so far. It's that Ted Williams hit a frickin' huge home run.

Slowest Trot: Hanley Ramirez, Miami Marlins – 26.33 seconds [video]
Speaking of big home runs, it's almost like Hanley Ramirez consciously decided that, if Marlins Park was going to need its home runs to be big, that's what he was going to give it. This is the second big home run in a row for Ramirez down in Miami. Hit Tracker Online estimates it at 439 feet.

It must be noted that Ramirez's incredibly slow time is only the slowest on the night by a few milliseconds. Texas' Mike Napoli, in his second home run of the night, rounded the bases in 26.02 seconds. That can only be partially explained by the time he spent waiting for the ball to land fair or foul. Boston's Adrian Gonzalez had the third slowest trot of the night at 25.28 seconds.

Quickest Trot: Dustin Pedroia, Boston Red Sox – 18.89 seconds [video]
The quick end of the tater trot spectrum was much less exciting. Dustin Pedroia's 18.89 second trot (I told you this Boston/Texas game was a goldmine) was the fastest of the night, and only the second trot to fall below 20-seconds. Milwaukee's Mat Gamel, in his first trot of the year, was the other sub-20 trot. Gamel came home in 19.55 seconds.