To date, six of the 46 players taken with the first-overall pick in baseball’s annual Rule 4 draft have not played in the major leagues. Gerrit Cole, Bryce Harper, and Tim Beckham—the top choices in three of the last four drafts—remain active, while a fourth, Matt Bush, currently resides in Charlotte County (Fla.) jail as police investigate a series of hit-and-run accidents on March 23 that left a 72-year-old motorcyclist comatose.

Only two former number-one picks have retired from the game without reaching the big leagues: catcher Steve Chilcott, taken by the Mets in 1966, and left-hander Brien Taylor, the Yankees’ top choice in 1991. Both players’ careers were derailed by injury, though Chilcott’s performance, even when healthy, inspired little confidence in his major-league future. Taylor, on the other hand, quickly established himself as an elite prospect before tearing the labrum in his left shoulder during an altercation in December 1993. Rehabilitation cost Taylor the 1994 season, not to mention eight miles an hour from his fastball, and the arm that changed the draft never realized the potential of what some consider the greatest high school pitcher they’ve ever seen.

Brien Taylor: Before and After Shoulder Surgery

Taylor’s transition from professional baseball player to just another member of society hasn’t been graceful, and the legal troubles he’s faced since retiring have only exacerbated his tragedy. When the drama is removed, however, is Brien Taylor truly the worst number-one pick of all time?

I typically turn to wins above replacement for quick, broad player comparisons. None of the players we’re investigating reached the major leagues, however, so we’ll have to explore other evaluation methods. Our goal is to arrive at a single value for each pick that represents its value relative to other picks in the same draft as well as picks in different years.

For this study, we’ll consider first-round players who signed among the top 30 picks from each draft between 1965 and 1997. We’ll evaluate the strength of each class and determine relative class strength by comparing the average career WARP earned per pick against the average per-pick WARP of all classes. To determine the average WARP constant, we’ll divide the total WARP accrued by the total number of picks in the study:

Then, we’ll compare per-pick WARP to the overall average of 6.74 to arrive at a strength score for each class: 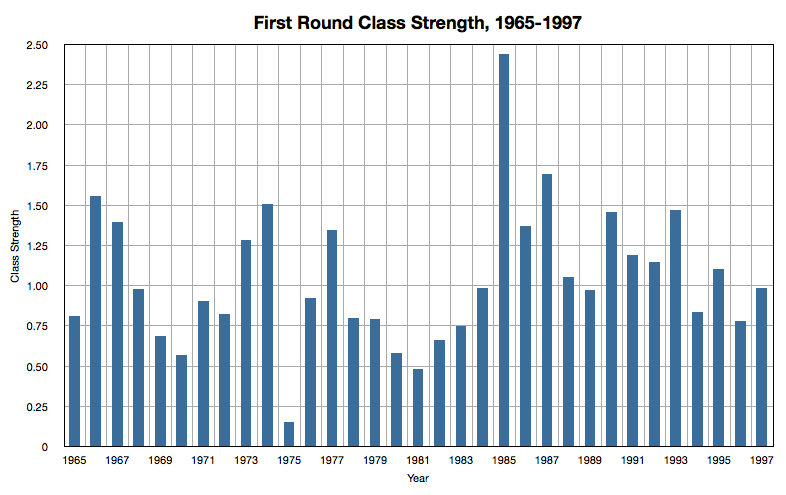 Next, we need to assign values to picks within each class. The method of we’ll use to determine the value of picks relative to one another is borrowed from Rany Jazayerli’s draft age study and is as follows:

To calculate the value of each class-pick, we’ll want to weight its generic Pick Value by the strength of its class. By doing this, we’re able to assign more value to picks in classes that produced significant major-league value, and less value to picks in underwhelming classes. The formula we’ll use to determine each Weighted Pick Value looks like this:

The denominator 0.319504 represents the average Pick Value of picks 1-30. Given that the 1985 draft is considered the strongest in history, it isn’t surprising that the most valuable pick in our study is that year’s first-overall pick. The Weighted Pick Value of 1985’s top pick is 44 percent greater than the next most-valuable number-one pick, which the Mariners used to select Ken Griffey Jr. in 1987. Note that while drafting team, player name, and player WARP are referenced below, none is a factor in determining the Weighted Pick Value of their respective picks.


Predictably, the least valuable picks are found at the back end of the 1975 first round, the least-productive class in the study:

Full results can be viewed in CSV format here.

By this method, the pick used to select Steve Chilcott in 1966, with a Weighted Pick Value of 4.87365, was 31 percent more valuable than the one (3.71822 WPV) the Yankees spent on Brien Taylor a quarter-century later. It could even be argued that outfielder Mark Merchant, taken by Pittsburgh with the second pick in 1987, was a bigger bust than Taylor because Merchant was taken in a class that turned out to be significantly stronger than the one Taylor fronted.

You need to be logged in to comment. Login or Subscribe
jivas21
As calculated, does the value of the Merchant pick *include* the contributions of Ken Griffey, Jr.? If so, the value of that pick is overstated since Griffey wasn't available for Pittsburgh to select.
Reply to jivas21
BurrRutledge
Yep. The value at a given pick can/should only include the WARP of the remaining players available. Dynamic, as it were.
Reply to BurrRutledge
mhmosher
I would say Matt Bush takes the cake. Poor performance and a dirtbag off the field.
Reply to mhmosher
sgturner65
Matt Bush is the Secretariat of bad first picks. I'd but Taylor closer to the Len Bias end of the spectrum of guys that destroyed their career by a bad mistake.
Reply to sgturner65
zasxcdfv
It's sort of amazing that BJ Surhoff was pretty good and was still nowhere even close to the best player in his draft class.
Reply to zasxcdfv
jdouglass
Chanes of a #1 pick being out-WAR-ed by another player in his draft by the volume in which Bonds > Surhoff are a hell of a lot smaller than the chances a #1 in a loaded draft never makes the bigs. Surhoff is the hyperbolically easy answer to the hyperbolic title question.
Reply to jdouglass
mhmckay
By all accounts, Brien Taylor was a deserved #1 who got hurt. Matt Bush and Steve Chilcott just weren't that good period. Point should be to select high expected value, recognizing that in life, your mileage will vary. To the Len Bias point -- obviously that was a mistake, in retrospect, but it was certainly the right decision at the time.
Reply to mhmckay
dethwurm
Great article! Some thoughts:

*It seems like many of the top classes are skewed by having one superawesome talent, while to me a "worst pick" to me means completely whiffing with a high pick in a deep draft. Also, pitchers' WARP tends to be somewhat lower than position players' (see also: JAWS standards by position), so pitching-heavy drafts are probably underrated by your methodology. I wonder how the results would change if you capped WARP at like 40/player max.

*It will be interesting to see when you update this article in 10 years (:)) how some modern drafts fare. Several have mentioned Matt Bush, but I'm wondering if Jeff Clement will end up with a place on the most valuable picks list. That 2005 first round was downright monstrous: Justin Upton, Ryan Braun, Troy Tulowitzki and maybe Andrew McCutchen and Ryan Zimmerman have some shot at the HOF based on their careers to date, while Alex Gordon and Jay Bruce are or could very soon be All-Star-caliber players, not to mention solid contributors like Ricky Romero, Cameron Maybin, and Mike Pelfrey. And that's just the first round! And I forgot Jacoby Ellsbury was in there. And Matt Garza. Mostly I just want to talk about how the 2005 draft was awesome. Holy crap, the 2005 draft was awesome.

*Finally, a question: 1975 wtf? How can a whole year's worth of talent be so worthless? I'm really, really curious what happened there. (Paging Steven Goldman?)
Reply to dethwurm
dethwurm
Re: Clement, I mean that the 3rd pick in 2005 would be amongst the most valuable of all time, thereby making Clement one of the worst selections ever. Apologies, I was too caught up thinking/fantasizing about Upton and Tulo and McCutchen and Braun to write clearly.
Reply to dethwurm
smocon
VERY interesting study. But to claim that BJ Surhoff was a more valuable pick than Will Clark, from the same dradt class and only one pick apart, makes me a little weary of it.
Reply to smocon
bradleyankrom
The weighted pick values don't have anything to do with how the players selected actually performed, it only considers the generic value of the pick (pick #1 is worth 1.00, pick #2 is worth 0.707, etc.) and the weight of the class in which the pick existed. If Clark had been taken first overall, and Surhoff second, the weighted pick value for 1-1 that year would remain the same.
Reply to bradleyankrom
LordD99
Chilcott and Bush sit at the top. Accidents happen, such as was the case with Taylor, but Chilcott and Bush were recognized at the time as bad picks driven by very poor reasoning, and perhaps worse.

In the end they are all busts because they delivered zero major league value to their clubs, but the Mets and the Padres earn some extra demerit points. The Yankees passed on Mike Kelly, who was the other top pick. The Mets passed on Reggie Jackson.
Reply to LordD99
Oleoay
I'll take a different tack and pick Josh Hamilton. He was given a big signing bonus by the Rays. He embarrassed the Rays, then a fledgling franchise, with his drug use at a time when the only thing drawing attention were Toe Nash stories. The Rays spent even more money trying to get him into rehab and kept him on the 40 man roster through 2007 when that roster spot could've gone to someone else. Then, he was left off the roster for Rule 5 Draft for a mere $100,000. If Hamilton had been in the Rays outfield in 2008 along with Upton and Crawford, it might've been enough to beat the Phillies in the World Series in 2008.

Sure, Hamilton provided more value as a first round pick as a major leaguer than Brien Taylor... but I'm not sure there's another first pick that damaged the team that drafted them so much.
Reply to Oleoay