Everyone on the outside wants to analyze pitching coaches, yet nobody can. Not knowing the coach’s instructions to his staff leaves an information gap between the numbers and anecdotal evidence. In return, there are two choices for evaluating a pitching coach: defer to the organization or take the anecdotal evidence at face value. The problem with anecdotal evidence is how it tends to pop up post hoc. Whenever Leo Mazzone turned a journeyman hurler into a quality pitcher, the explanation bordered on circular reasoning.

Beyond banality, this information doesn’t do much for analysis. There is no incentive for pitching coaches to make their tweaks public, and that leaves the knowledge-seeking public to scope out every aspect of the latest breakout, in hunt of the fix. Often, the answers are unsatisfactory. Ryan Vogelsong went from forgotten journeyman to legitimate major-league starter, and the best reasoning out there is that he realized he needed to pitch inside. The simplicity of that fix borders on inanity and that’s what makes it so good. The best fixes are the most obvious ones, the ones that everyone sees, but only a trained eye observes.

Rick Peterson might be the master at subtle fixes. Peterson is possibly the closest thing breathing to a modernistic pitching coach. He dabbles in left-brain, right-brain psychology and deals in biomechanics. Oh, and he leaves you feeling like a primate when it comes to observing pitchers. That’s because Peterson has a reputation for altering the most obvious thing about a pitcher and having it work without anyone noticing. Take one of Peterson’s recent pupils, John Axford. Five years before the mustachioed closer received votes for the Cy Young and Most Valuable Player awards, he was an undrafted collegiate arm.

Over that time, Axford changed teams and likely altered his taste in facial hair. He also changed his placement on the mound during the 2010 season, at the insistence of Peterson. As the former Brewers pitching coach told everyone in December 2010, with the implication chronicled by our own Maury Brown:

As the May snapshot shows, Axford had been struggling with his location. According to Peterson, Axford’s foot plant had been too far to the right, thus placing his release point outside of the window within the strike zone. By adjusting his foot to the left, Axford’s release point moved within a range that allowed him to adjust where the ball was coming into the strike zone, as detailed in the second image.

PITCHf/x data confirms that Axford moved toward the center of the rubber during that season, though Mike Fast rejected Peterson’s assertion about good pitchers releasing the ball within the strike zone. What Peterson didn’t tell everyone that afternoon is his history with changing positioning on the rubber. During Peterson’s time in Oakland, he moved Barry Zito, Tim Hudson, Mark Mulder, Billy Koch, and others. A January 2003 Baseball Digest feature offered insight into the moves with explanations from Peterson. The A’s moved the southpaws, Mulder and Zito, so that they could pitch inside to righties without throwing across their bodies. They moved Koch, whose closed landing complicated locating glove-side. They even moved Hudson twice: once due to his open landing, then again to take advantage of his fastball’s movement after he corrected his flaw.

Throughout the article, Peterson’s reasoning for each move vacillates between health- and performance-related necessities, while the more in-depth explanation adds color. The beautiful thing about a positioning tweak being the fix is how simplistic it sounds. Changing a pitcher’s mechanics, even his landing, is a battle with a pitcher’s physiological and mental sides. To paraphrase Earl Weaver, it doesn’t matter if you believe that a fix can make a poor pitcher into an All-Star so long as the pitcher himself doesn’t buy in.  When contrasted with changing mechanics, shifting a foot or so over doesn’t sound so drastic.

Peterson wasn’t the only one shifting pitchers on the mound then, and he isn’t the only one doing it now—in part because he isn’t employed by a big-league team as a pitching coach. Max Marchi provided the table below, showing the largest absolute differences between average horizontal release points in 2011 from 2010. Note that the table only includes pitchers who threw 1,000 or more pitches in both seasons, so as to avoid run-ins with the small sample brigade. Here is the top 10 percent of that group, otherwise known as the most drastic shifters:

The numbers alone make some of these shifts tough to visualize. The pitching rubber is two feet long, but without knowing where the pitcher started, it’s hard to make anything more than a general assumption about his new location. To assist with that visualization, here are a few of the top shifters and their before and after spots on the rubber. 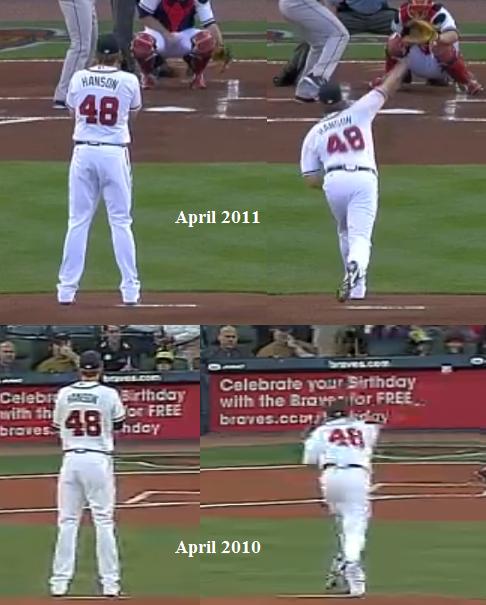 Tommy Hanson is the victim of a changed home-broadcast angle between the two seasons, as these images are from his first home start of each year.  While the angles themselves aren’t the same, you can still see how Hanson shifted on the rubber. In 2010, his right foot is as far to the third base side of the rubber as possible. In 2011, Hanson’s right foot is on the opposite end, while his left foot is off the rubber.

Here is David Huff, again with his first home start in each season:

Again, Huff’s plant foot (his left foot) tells the story. Within 15 months between these starts, Huff had moved from straddling the rubber to having his left foot slide to the third-base side.

In one last example, Jaime Garcia is shown, though his shift is less dramatic: 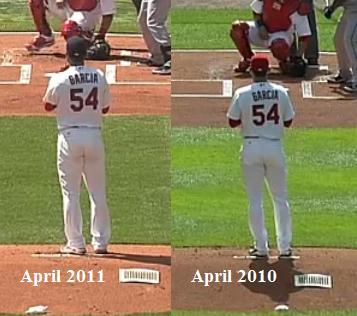 Now that everyone knows what a rubber-shift looks like, the question is what kind of pitcher makes the move, health-related moves aside. One talent evaluator I spoke to fingered sinkerballers, citing the angles the move creates against same-handed hitters. Going back to Peterson’s Hudson move, a slide towards the first-base side gave Hudson free rein to throw his fastball and let the run take it to the inside corner against righties. The evaluator also pointed out that a better angle on secondary stuff away from the batter is an added benefit.

All of that makes sense; however, if those improvements are genuine and common, then they should show up by the pitchers performing better. Taking the 16 pitchers presented above—the drastic shifters—and weighing their performances by pitches thrown generates the following results:

There are some caveats to apply to the results as only one year of data is used. Further, it isn’t clear that the shift for each pitcher was intended for performance reasons rather than health reasons. Overall though, there are few noticeable differences. The ERA went up and the FIP went down. The increase in ERA isn’t unexpected, given that Kyle McClellan shifted from the bullpen to the rotation, but otherwise, there isn’t a lot of good news to write home about. David Huff represents the group’s success story, and even he pitched only like a league-average starter.

The takeaway is that no one fix is universal. A mechanical tweak that turns Kyle Davies into Justin Verlander does not exist. Similarly, you could move Roy Halladay to either side of the rubber and he would probably still be one of the best pitchers in the game. In other words, evaluating a pitcher is a lot like evaluating a pitching coach: making a change just for change’s sake is rarely a good idea.

Thanks to Max Marchi for research assistance.

You need to be logged in to comment. Login or Subscribe
lichtman
Nitpick: FIP went UP also, albeit by a smaller amount than ERA.
Reply to lichtman
surfdent48
Volstad has done the same thing-shifted from the glove side way over to the arm side of the rubber. His avg against, K/9 and WHIP are much better.
Reply to surfdent48
BurrRutledge
I've often wondered if there is any incental advantage for pitchers shifting on the rubber to try to mitigate platoon splits. Given the chart above, I'm less inclined to wonder. Agree?
Reply to BurrRutledge
gweedoh565
I enjoyed this- very interesting, even w/ nothing concrete to conclude!

Do you know (or can someone do the research on) the extent to which a pitcher's rubber placement is variable? i.e., are there pitchers that move around a lot within one game or do they tend to stay consistent throughout a game/season?
Reply to gweedoh565
dontpush351
Out of curiosity: in the top image Hanson's pitching from the left side to a lefty, while in the bottom he's pitching from the right side to a righty. I've seen pitchers shift on the rubber depending on batter-handedness, is this also part of what Hanson is doing here?
Reply to dontpush351