A new paperback copy of Kevin Kerrane’s Dollar Sign on the Muscle: The World of Baseball Scouting costs $141.12 on Amazon. A new hardcover copy will run you $284.94. That’s a shame, since it’s worth reading. Not many people have upwards of $100 to drop on a baseball book, especially after buying copies of BP2012 and Extra Innings for all of their friends, family members, and co-workers.*

*In 2008, I bought one online for $5. If I'd known the market for books about scouting from the 1980s was about to explode, I would have stockpiled many more. Bad scouting by me.

The book includes a chart devised by Jim McLaughlin, the first scouting director of the Orioles, who later held the same position with the Reds. You know that scene in Moneyball where Billy Beane gets fed up with the stereotypical scouts who are telling him how each player’s face and girlfriend look instead of what he wants to know? McLaughlin was Billy Beane in that scene, 50 years before Billy Beane was. McLaughlin rarely left the office to see players in person. Instead, he concentrated on making scouting a more scientific process: in his own words, he “scouted scouts.” According to Kerrane:

…he brought baseball scouting into the modern era by exercising rigorous bureaucratic control. He began employing cross-checkers in 1955, ten years before the draft, to provide multiple, layered views of top prospects. He reorganized scouting territories for more extensive fishing where the fish were biting. He held scouting seminars, staged mock signings, and barraged his staff with memos on the difference between skills and talents, or between performance and tools. And when possible, he got rid of the old-fashioned individualists.

Alex Belth wrote more about McLaughlin here. Basically, he’s the patron saint of scouting for anyone who believes in an objective approach to baseball. As part of his efforts to make scouts more efficient, McLaughlin created a chart to capture all the qualities of a player, separating them into tangibles and intangibles. This is that chart. You can tell it’s old, because when McLaughlin created it, people still hadn’t discovered that they could save themselves some time by making “Ball Player” one word. (Click to expand.) 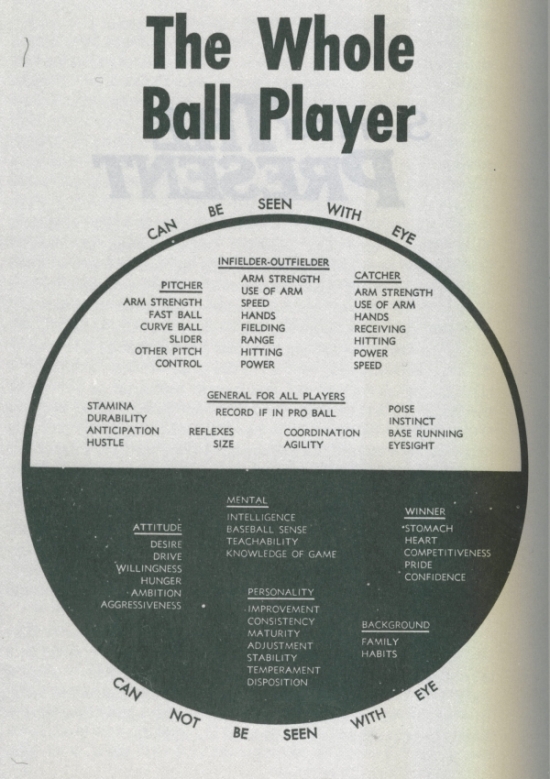 It’s easy to poke fun at a few things here. (Heart and stomach? Wouldn't heart and "hunger" suffice? Desire and drive and ambition? Is this a chart about scouting or synonyms?) But while McLaughlin’s diagram is old, it’s not outdated. Today’s scouting directors still care about “The Whole Ball Player.” They just spell it with one fewer space.

You need to be logged in to comment. Login or Subscribe
ragerd
Shoot, I have a copy. I'll sell it for $50 to the first taker :-)
Reply to ragerd
bornyank1
$49!
Reply to bornyank1
philly604
If you just want to read it (which I recommend) and not own it, your local library probably either has it or can get it through inter-library loan. The latter is how I read it a few years ago.
Reply to philly604
bornyank1
I checked the New York Public Library site before posting. No dice. Maybe I'll donate mine. The book does deserve to be read.
Reply to bornyank1
lyricalkiller
Long Beach library system doesn't have it, either. Sadly, I tried to buy it when it was only $40 or $50 a year or so ago and figured I'd wait for one that was cheaper. And it just goes up and up and up.
Reply to lyricalkiller
philly604
Huh, chalk one up for the PA suburbs then.
Reply to philly604
jfranco77
I also got a copy back when it was $5. Maybe I should sell mine too, though I do enjoy going back through it once in a while.
Reply to jfranco77
JimmyJack
Has anyone read "Can he Play?" from SABR? I got a free download, but haven't had time to read it yt.
Reply to JimmyJack