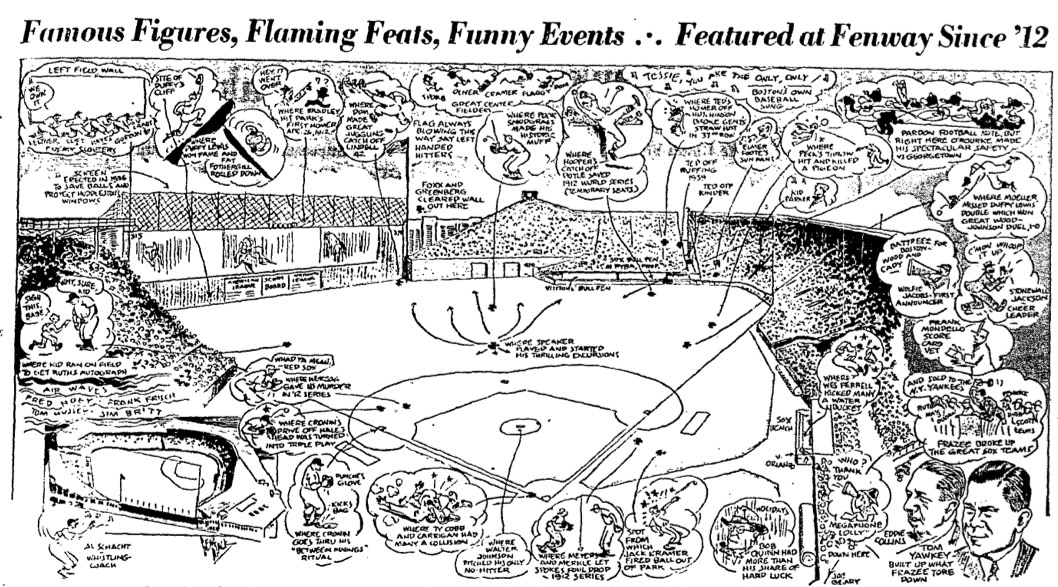 In honor of the 100th anniversary of Fenway Park next Friday – a day that will assuredly be glossed over by the general baseball media for its lack of national appeal – I present to you this artist's rendition of the famous Boston landmark from 1946. This image comes from a series of drawings made by Boston Globe cartoonist Gene Mack and republished in 1946-47 Sporting News issues. In the series, Mack drew his interpretation of each of the 14 major league ballparks in use at the time, with notable moments, landmarks, and other stadium ephemera highlighted throughout the illustration.

Mack's drawing of Fenway Park is beautiful, giving us a great look at what it was like to attend a Red Sox game when Ted Williams was still in his twenties. Even better, it's a look at the kind of casual history whose light might be bright enough to shine for 30 or 40 years before dimming and fading out of memory. Maybe some historians might still be able to tell you about Joe Cronin's between-innings rituals, Megaphone Lolly, or even Fats Fothergill rolling down Duffy's Cliff, but the moments clearly captured the public's imagination in 1946 more than they do today.

Look around the illustration. Up in the bleachers there's the description of Ted Williams' famous 502-foot home run to the rightfield (and memorable shots off Red Ruffing and Ellis Kinder). On the rightfield grass Mack reminds us of the moment a player (Peca? Pica?) killed a pigeon with a thrown ball. There's also Jack Kramer, who tossed a ball out of the park from near the first-base coach's box. The best moment shown on the canvas, though, is one mentioned above. In left centerfield, where the Green Monster comes to a point, Mack points out Duffy's Cliff, the hill that was in-play from 1912 through 1933. On that hill one afternoon, Detroit outfield Bob "Fats" Fothergill slipped and fell and, reportedly, rolled down the hill as you might expect someone nicknamed "Fats" might do. Mack seemed to have a good time illustrating the moment. And there are many more to be found.

Fenway Park is 100 years old this season and certainly feels from a different era, with its dark halls, mis-angled seats, vertical support beams and everything else out of Taft's era. However, with all the changes that have been made to the stadium over the decades (especially the major overhaul it's seen in the last ten or so years), it is very much a different park than what it was when it opened in the wake of the Titanic news. Images like this one from 1946 help give us a window into what Fenway was really like all those years ago, and for that we heartily thank Gene Mack.