Kyle Farnsworth’s elbow discomfort not only landed him on the disabled list, but opened up one of the game’s more interesting early season position battles. Under normal circumstances, Joe Maddon would not have to choose between Fernando Rodney and Joel Peralta to close out games, yet here he is, doing just that on a day-to-day basis. So far, Rodney looks to be the leader, having notched three saves in three opportunities—two due to Peralta’s ineffectiveness. The most recent came on Wednesday, with Rodney tossing a one-two-three inning after the Rays came back in the ninth inning.

Many questioned the Rays when they signed Rodney to a multi-year, multi-million dollar deal this past winter. At the time, I wrote:

Whatever the Rays see is a hypothesis to be tested, just as when the Royals signed Jeff Francoeur or made countless other moves. Realistically, many attempted rejuvenations fail to make a difference—hence the skepticism that greets the idea of Rodney returning to above-average form. Still, if there is a role in which a 35-year-old can transform himself, it’s as a reliever. Just ask Kyle Farnsworth or Joel Peralta, two of Friedman’s gambles from last winter who turned out well.

Unless you believe in giant coincidences, it appears that the Rays did have a tinker in mind when they signed Rodney. That tinker is only visible to the naked eye with the added context of a comparable image: 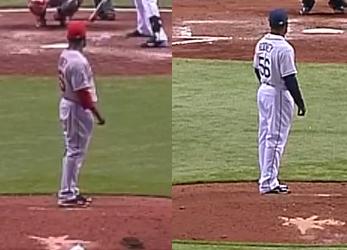 On the left is Rodney’s set-up from a game in late-April, 2011. On the right is Rodney from this past Saturday. For those struggling to see a difference beyond uniforms, look at Rodney’s foot placement relative to the rubber. Whereas Rodney is closer to the third base side in the older image, he is now all the way to the first base side. Here is another set of images to compare, these from when Rodney is pushing off the rubber:

This change appears to be a radical shift for Rodney. Take a look at the below chart, generated by PITCHf/x data (via Brooks Baseball), that shows Rodney’s horizontal release points by year. At no point has Rodney been this far to the first base side in the PITCHf/x era.

So what does this all mean? It could be nothing. Players tweak things all the time; adjusting is part of being a baseball player. But with Rodney, you can’t help but wonder if this might help his sinker. Now, instead of having the pitch run too far inside to right-handed batters, it could nestle on the inside corner, making it a more attractive pitch for a batter to swing at. It’s also possible that Rodney’s arm-side control on his other pitches will improve because of the move. Now, it is unlikely that Rodney will turn into a relief ace because he slid over a few inches, but it might make enough of a difference that he can hold onto the closer’s job until Farnsworth returns.

You need to be logged in to comment. Login or Subscribe
Drakos
The Padres have done the same thing with Casey Kelly and it seems to have helped him too. I also remember moving my pitchers around on the rubber in Earl Weaver Baseball back in the late 80s. Who knew I was so far ahead of my time?
Reply to Drakos
RJAnderson
Hadn't heard about Kelly. Thanks for sharing that.
Reply to RJAnderson
Drakos
Mark Grant on the Fox Sports San Diego Padres broadcast just talked about how Anthony Bass moved to the first base side of the rubber for this season. Says that he wish he had tried it when he was pitching. Mark Sweeney said that Trevor Hoffman used to move around on the rubber to setup pitchers. It wasn't clear if he did this within a single at bat or would just setup differently depending on the batter. The Brooks Baseball data for Hoffman does make it look like he had two distinct release points on the horizontal plane that were about a foot apart. Most of his pitches classified as sliders came from one of these release points while the fastball and change came from both.
Reply to Drakos
RJAnderson
Iâ€™m going to keep an eye on Bass, so thank you for passing this along.

Also, Iâ€™m looking to expand on this concept for Tuesday, so hopefully that venture yields something of note.
Reply to RJAnderson
Oleoay
Rodney was above average only once in 2006. His K/9 has been average since 2008 and his WHIP has been horrid.
Reply to Oleoay
drawbb
The Tigers had Rodney in the organization for nearly a decade, and the Angels had him for 2 full seasons. Tampa Bay has him for a single spring training and makes the shift...res ipsa loquitur.
Reply to drawbb