The last time we saw Matt Moore start a meaningful game, it was against a Texas Rangers offense that came within 20 runs of leading the American League in scoring. Before that, he pitched against the Yankees, who were just eight runs shy of the league lead. So it might not be true that, as Tigers announcer Rod Allen says, this is the best lineup that Matt Moore has ever faced. Also, it might be true. It’s a good lineup. And it’s almost certainly true that Miguel Cabrera is the best hitter he has ever faced, especially considering Moore’s platoon disadvantage.

So that’s what Moore did on Tuesday, his third major-league start: he faced Miguel Cabrera, three times. I’ve been told by my therapist that I need to quit raising expectations for the future, so let’s not go crazy about where this matchup stands in history. Just note that there were games when rookie Tom Seaver faced Hank Aaron (2-for-20, HR, seven Ks during Seaver’s rookie year), and when rookie Felix Hernandez faced Alex Rodriguez (0-for-2, K, BB) and when rookie Bob Feller faced Joe Dimaggio (9-for-20, four home runs). And now Matt Moore (!!!) is facing Miguel Cabrera (!!!). Awwww crud I did it again.

Plate Appearance One
Matt Moore looks a bit geeked as he begins the first inning, missing up in the zone against Austin Jackson and Brennan Boesch. But the bases are empty when Cabrera bats with two outs. Here’s the sequence of pitches to Cabrera:

Here are the locations: 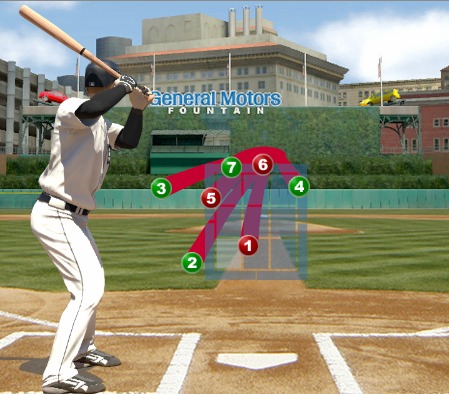 And here is the payoff pitch: Moore walks him, but he isn’t pitching around him; at least two pitches could have been called strikes, including ball four, which was actually closer to a strike than the pitch that Cabrera fouled off. Strike one is the only whiff of the inning, and it's particularly impressive: smooth and easy delivery, thrown right down the middle, and Cabrera misses it. Moore tries to go inside on Cabrera and jams him for the second strike, but Cabrera is geared up enough to get a piece of pitch six, 96 mph and out of the zone high. Those two 96es are the fastest pitches that Moore will throw all game; he mostly sits around 92-93. So it's a walk, but an impressive walk: Moore jams Cabrera, he gets Cabrera to whiff, he gets Cabrera to chase, and he very nearly strikes Cabrera out looking.

Plate Appearance Two
In his second plate appearance, Cabrera bats with two runners on. Brennan Boesch is on first, having singled on a slider up. It's just the third slider Moore has thrown to this point, so it seems unlikely that Cabrera has to worry about seeing it. 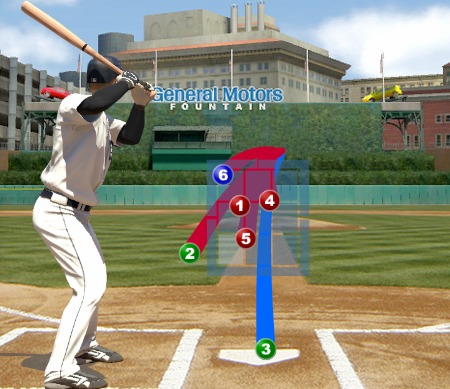 Just as Moore muscled up to throw his two fastest pitches of the day in Cabrera’s first at-bat, he reaches 95 mph twice in this plate appearance, the last time he'll hit 95 in the game. (Only one pitch he threw to the rest of the Tigers’ lineup reached 95; seven of the pitches he threw to Cabrera reached that mark.) Cabrera’s swings are almost as easy as Moore’s delivery, but with a 2-1 count, he lets loose and whiffs again. So Cabrera has, up to this point, seen 11 pitches from Moore, swung at five of them, whiffed twice, and fouled three away.

As he did in the first match-up, Moore amps up his velocity as the at-bat goes on, and Cabrera fouls off 95 to stay alive. Then he goes back up high, where he had thrown both 3-2 pitches in the first at-bat and where Cabrera had chased once. Cabrera again chases, but with a very short swing, and he punches a line drive to right field, which Ben Zobrist catches. This time, Moore gets Cabrera out, but the at-bat was really Cabrera’s; Moore spiked a wild pitch the one time he went to an off-speed pitch, and even at 95 mph and up (and perhaps out) of the zone he was able to catch up to the fastball that he sat on.

Plate Appearance Three
Again Cabrera bats with two on and two outs, but this time Joe Maddon has decided to be careful with him. After a wild ball one—one of the wildest pitches of the day for Moore, who missed plenty but rarely by much—he throws a 1-0 pitch just outside for ball two. Moore and Jose Molina have been working Cabrera inside for much of the day, but Moore stays away from him in the third matchup. At this point, Maddon called for the intentional walk. By the time Cabrera bats again, Moore is out of the game.

All very entertaining, if not necessarily instructive. The first two matchups really show the power of Moore’s fastball, as Moore was basically using one pitch and overmatching Cabrera in multiple locations. They also show the skill of Cabrera, who laid off two tough fastballs inside, caught up to 95-mph heat high, and made Ben Zobrist slide to save a run. We already knew Moore had a powerful fastball, and we already knew Cabrera was a skillful hitter, of course, but dang if it’s not going to be fun watching thems coexist for the next few years.

You need to be logged in to comment. Login or Subscribe
hotstatrat
Great graphics!
Reply to hotstatrat
Daddyboy
All I can say is, this was cool.
Reply to Daddyboy
tradeatape
I hate to be Debbie Downer, but Rick Porcello's line for the day was better than Moore's.
Reply to tradeatape
Yefrem
Ricky's two steamer was dancing all over the lower part of the zone. He was tough all day.
Reply to Yefrem
bhalpern
On the subject of batter vs. pitcher matchups, one of my favorite stats ever is Randy Velarde career vs. Randy Johnson: 19 for 46 .452/.500/.548
Reply to bhalpern
Marycontardi
Thanks Sam! Enjoyed the breakdown.
Reply to Marycontardi
willsharp
Doesn't it look like Cabrera starts laughing after ball 4 in that first gif?
Reply to willsharp
lyricalkiller
Wow, it does. Either that or he's grimacing, expecting to be called out. Interesting.
Reply to lyricalkiller