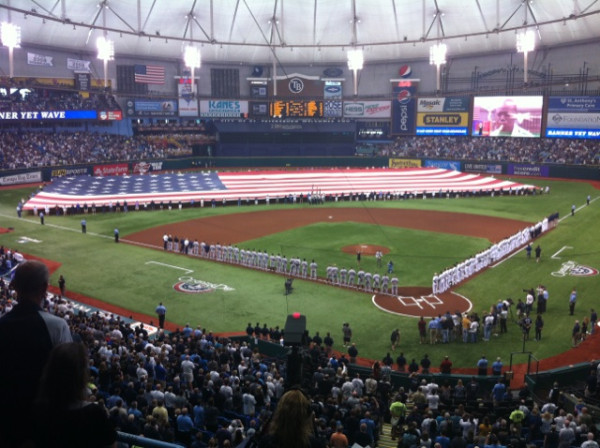 The Rays enter the 2012 season from a different starting point than any other year. Even after winning the American League East in 2008, they were viewed as a team that could not repeat. When they did it again in 2010, the focus shifted on the gutting of talent on the roster as free agents went off to higher paying pastures. This year, more pundits than ever have pegged the Rays anywhere from a wildcard winner to the World Series Champion to which owner Stuart Sternberg has one thing to say – "everyone needs to come to their senses."

Joe Maddon is a bit more comfortable with those expectations and suggested the team needs to embrace them despite the injury challenges that have presented themselves this spring while Sternberg is not quite there yet. "Look at the lineup the Yankees are rolling out there today and look at ours…..everyone needs to come to their senses a bit." Sternberg prefers the underdog status the team has had the last few seasons and would like to take those lofty expectations being laid upon the team and knock them down a bit with a stick to be at his comfort level. Throughout this competitive run for the team, Sternberg's goal has been to be playing competitive baseball in September and that remains his goal for 2012.

The team likes where the roster is at after the additions of offensive threats in Carlos Pena and Luke Scott but that does not mean that Maddon will be any less creative with the lineup for every game. Maddon often receives criticism in the local media markets for his ever-changing lineup machinations, but that practice will not be ending any time soon as Maddon continues to look for the best matchups and edge to produce as well as prevent runs.  A good example of this would be Luke Scott. Even though he was one of the two big free agent signings by the team this off-season, he is not in the opening day lineup because Maddon wanted to be sensisitve to Scott's continuing rehab from shoulder surgery as well as avoid a tough matchup against CC Sabathia. Instead, Elliot Johnson is in the lineup playing second base while Jeff Keppinger fills the unlikely role of Designated Hitter for the first time in his playing career. Of the two players, Johnson is the superior defender which justifies him in the field over Keppinger while Keppinger hitting fourth is due to his high contact profile.

The team has sold out the first two games of the series and hopes that the attendance will end its three-year slide this season. Winning has not cured all ills as everyone predicted when Sternberg and the ownership first took over the team and the stadium saga continues to loom large over this team, particularly in the shadow of the Miami Marlins and their new stadium three hours to the southeast. Expectations are high for the standings, for the attendance, and for the post-season as everyone watches closely to see which parties answer the call over the next six months.


â€‹It is a well-known fact that the Rays enjoy employing defensive shifts as they shifted their players 46 more times than any other team in baseball last season and saved 31 more runs than any other team in doing so. What is not well known is how often teams have shifted Curtis Granderson as the Rays did today which helped the Rays turn an early double play. In talking with writers in the box as well as Jay Jaffe on Twitter, nobody could recall the last time Granderson had a shift used against him such as the one the Rays used. Granderson's spray chart shows why:

While the shifting worked in the first inning, it has not mattered much since as James Shields has been well off his game today. He has had trouble locating pitches today and has left many of them up which the Yankees have made him pay for. The Rays had the early momentum as Carlos Pena hit a grand slam in his first plate appearance back with the team but Shields and the defense quickly gave up six unanswered runs. Three of those runs could have been prevented on what looked to be an inning-ending 3-6-3 double play, but Pena chose to go home to try to prevent Cano from scoring and Cano beat the tag.

Entering the game, it amused many to see Jeff Keppinger hitting cleanup on opening day. It was said to be another example of Joe Maddon doing Joe Maddon things. While that move is defensible given Keppinger's abilities against left-handed pitching, calling for Sean Rodriguez to lay down an apparent safety squeeze with runners on first and third and nobody out is befuddling. Longoria and Keppinger reached base on balls hit to center that looked completely playable for Granderson but in both instances, Granderson let the ball play him. Rodriguez has had an OPS of .832 against left-handed pitching while a member of this organization and represents the biggest threat in the bottom half of the lineup. Pena's earlier grand slam aside, Pena, Elliot Johnson, Jose Molina, and Matt Joyce are on the very short end of the stick against Sabathia but the play was called and the bunt was not executed well enough for Longoria to attempt to score. That left runners on second and third with one out for a strikeout prone hitter and a hitter with a .224 TAv last season to face on the of the game's best pitchers and those runners would stay there as Pena struck out while Johnson hit a hard liner to Alex Rodriguez to end the inning.

In his post-game press conference, Maddon said this game had all the feel of a post-season game from a strategy level. He admitted to being more aggresive tha usual with defensive positioning but stressed that has a lot to do with the comfort level of the pitcher and that everyone is on the same page with the defense. Both he and Girardi had plays put on, defensive shifts, and Girardi even pulled a Maddon special using five infielders in the ninth inning hoping that Carlos Pena would make weak contact that could be converted into a double play. Instead, Pena ended the game as he started it by driving in the winning run with what ended up being a 400 foot single to left-center field that would have been his second bases-clearing hit of the day had it come in another situation.

The perfect is the enemy of the good; this was a good game to watch but it certainly was far from perfect. Maddon's call for Rodriguez to bunt with nobody out in the fifth inning and Jose Molina missing a bunt sign on a called double steal in the eight inning were critical mistakes that the Rays were able to overcome on the strength of their bullpen. Six relievers combined to throw four hitless innings of baseball and keep the Rays in the game long enough to break through their own struggles with runners in scoring position. Both teams were 2 for 11 with runners in scoring position and combined to strand 22 runners on base. The last two times these teams have faced one another, the game has ended in walk-off fashion for the Rays. Last year, it was Evan Longoria sending the Rays into the post-season while today, it was Carlos Pena experiencing a homecoming he could not have scripted any better.

It all happens again tomorrow as the Rays play in front of back to back sold out regular season crowds for the first time since these same two teams opened up the Rays home schedule in 2009. Yes, that is actually possible in his market.

You need to be logged in to comment. Login or Subscribe
ScottBehson
Three notes from watchung this game on YES:
1. Giradi's ungodly overmanaging in that 1st inning- IBB to load the bases in front of Pena- WALKING REAN RODRIGUEZ, WITH YOUR ACE, IN THE FIRST INNING, LOADING THE BASES!!!!!

2. Yankees broadcaster David Cone referenced Mike Fast's work here at BP on catcher framing when discussing Jose Molina and how he got a borderline call for a K against Teixeira

3. Cone also referenced stride distance as a way to increase "effective" pitch speed (which was also a BP article this past year) when discussing David Robertson.

Cone's the best!!!
Reply to ScottBehson
moonlightj
As much as Rodriguez struggles against RHP, we were a bit stunned that the IBB was issued.

Big fan of Cone - he would love to watch Niemann pitch since his stride makes his average fastball look better. Robertson is truly Houdini
Reply to moonlightj
buddaley
I absolutely agree with your remarks on the Rodriguez bunt. Given his success against lefties, the batters who followed him and thinking too about playing for one run against the Yankees, it seemed to me a poor decision.

I was also baffled that Pena threw home. The ball was hit so hard, and Alex Rodriguez was barely off 1B when Pena gloved it, that the simplest play seemed to be the 3-6-3 DP to end the inning.

There were other misplays, but those were the two that irked me. Still, the atmosphere was electric, and the Pena performance is what baseball stories are made of.

Did the game really demonstrate Molina's ability to frame pitches? I did not see many examples of the Rays getting borderline calls. In fact, if anything (and Peralta especially), it seemed they were getting squeezed a bit. I sit just behind a stadium TV that sometimes shows replays of pitches, and on that strikeout of Swisher he seemed to throw 5 strikes but two were called balls. (I also thought Molina should have moved to smother that Shields wild pitch rather than try to backhand it.)
Reply to buddaley
moonlightj
The post-game comments from both Molina & Shields say otherwise on the framing. West's zone was an evolving creature last night that got wider in the late innings but also disappeared in the lower portion.
Reply to moonlightj
buddaley
I certainly trust their judgment on that better than mine. Glad to hear it.
Reply to buddaley