Among pitchers who have debuted since 1965, three of the five best career WARP totals belong to players drafted out of the collegiate ranks. Former Texas Longhorn Roger Clemens leads the way with 103.4 WARP earned over 24 big-league seasons, followed by ex-Southern Cal star Randy Johnson (90.7). Prep hurlers Greg Maddux (83.9) and Steve Carlton (73.4) take the third and fourth spots, and another former Trojan, Tom Seaver (72.9), rounds out the top five.

While schools like Texas and USC are well known on the national stage, successful baseball programs can claim significant credit for increasing the profiles of several less-familiar colleges and universities, including Pepperdine, Cal State Fullerton, and Long Beach State, three schools lacking the profile (and revenue) associated with Division I football programs.

The Data
This study includes all four-year college pitchers drafted and signed out of the first 10 rounds of the draft between 1965 and 2001, totaling 1,845 players and representing 428 schools. More than 40 percent of the schools in the study produced only one signed draft pick, and three out of four—76.9 percent—are represented by five or fewer picks. 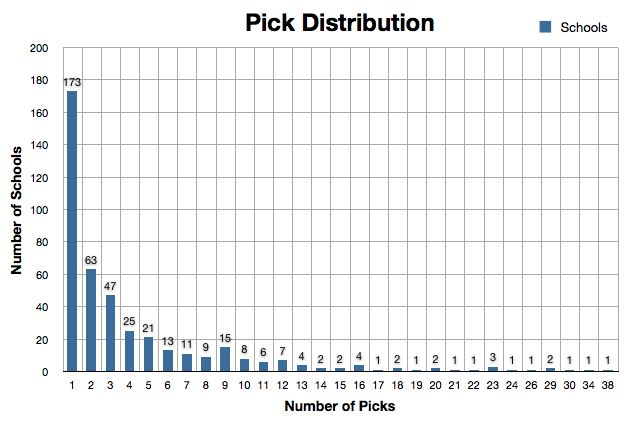 Three programs—Arizona State (38), Texas (34), and Southern California (30)—featured 30 or more picks in the study, and a total of 14 contributed 20 or more. Predictably, the five most common pick totals were one through five, but the sixth-highest count was nine, seen 15 times in the study.

The data utilized in the analysis that follows is drawn from the first 10 full professional years of each player’s career. For example, statistics attributed to Jamie Moyer, whom the Cubs selected in the sixth round of the 1984 draft, are only those accrued between 1984 (year zero) and 1994 (year 10). Though we’ll refer to these figures as 10-year totals throughout this article, it is possible for players to have 11 seasons' worth of data included in their 10-year totals. This happens when players reach the major leagues in the same year they are drafted (year zero), such as when Greg Swindell made nine late-season starts for Cleveland less than three months after the Indians made him the second-overall pick in 1986.

Going forward, all statistics appended with “10” are 10-year totals.

One final note regarding the data you’ll see in this article. Taking a cue from Rany Jazayerli, I’ve opted to zero out WARP totals for players who reached the major leagues but accrued below-replacement level WARP. Quoth Rany:

Given that most draft picks don’t reach the major leagues at all, it would be misleading to penalize a player who was good enough to reach the majors for having a negative-WARP season, relative to a player who might never have gotten out of rookie ball.

Determining Value
There are myriad methods that could be used to determine which school’s products returned the most value, and we’ll explore a few of them throughout this article. In addition to raw WARP totals, we’ll also look at some less-traditional ways of determining value.

The most obvious, and least-telling, method is to simply sum all of the WARP10 earned by each program’s players.

If you read the introduction to this article, it shouldn’t be much of a surprise that USC and Texas top all programs in WARP10 returned with 119.26 and 115.13, respectively. After the top two, there’s a significant drop-off to the third-ranked program, Pepperdine (72.69), and another sizable gap is found between the sixth (Arizona State, 54.74) and seventh (Louisiana State, 42.80) schools.

While total WARP10 is a quick and easy way to stack programs up against one another, is it a reliable way to determine the overall value of a program’s contributions to the major leagues?

USC received 63.6 percent of its total WARP10 from the two players referenced earlier, Tom Seaver (48.12) and Randy Johnson (27.76), and 96.8 percent from those two plus Barry Zito (22.96) and Mark Prior (16.68). Similarly, Roger Clemens accounts for 41.3 percent of Texas’ total WARP10, and only three other Longhorns contributed more than 3.5 WARP10. Things fall off abruptly for Stanford who, despite being anchored by two of the top-25 pitchers of the 1990s in Mike Mussina and Jack McDowell,  produced only one other pitcher (Rick Helling, 10.31) worth more than two WARP10 from among their 16 non-Mussina/McDowell picks to reach the major leagues. 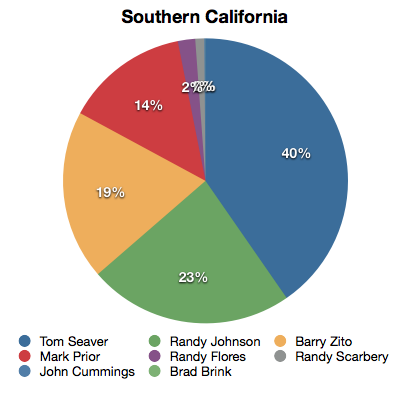 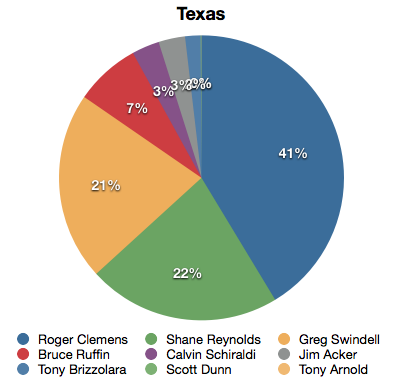 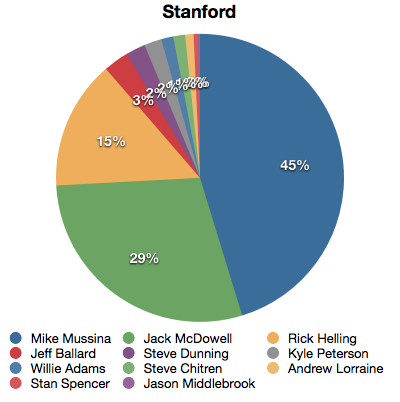 Three of the top four schools received 40 percent or more of their total WARP10 from a single player. We’ll investigate the benefits and drawbacks of quantity and quality a little later.

Eight of the top-10 programs in WARP10 also rank among the ten schools that produced the most above-replacement level seasons (ARP10) in the study. This is a fair way to gauge which programs produced the most major league-caliber players.

Replacement-level players aren’t what clubs are mining for in the top 10 rounds of the draft, however: they’re looking for franchise cornerstones, stars, and above-average major-league contributors.

For this study, the average level of pitcher performance was determined by averaging the seasonal WARP earned by all pitchers who threw 75 or more innings during the regular season (view each year’s average here). An above-average season is credited to a pitcher whose seasonal WARP is greater than that season’s average WARP.

Reviewing gross totals is a convenient way to determine which programs have produced the most overall value, but, as you’ve seen, there’s a correlation between the number of players drafted from a program and that program’s value returned. 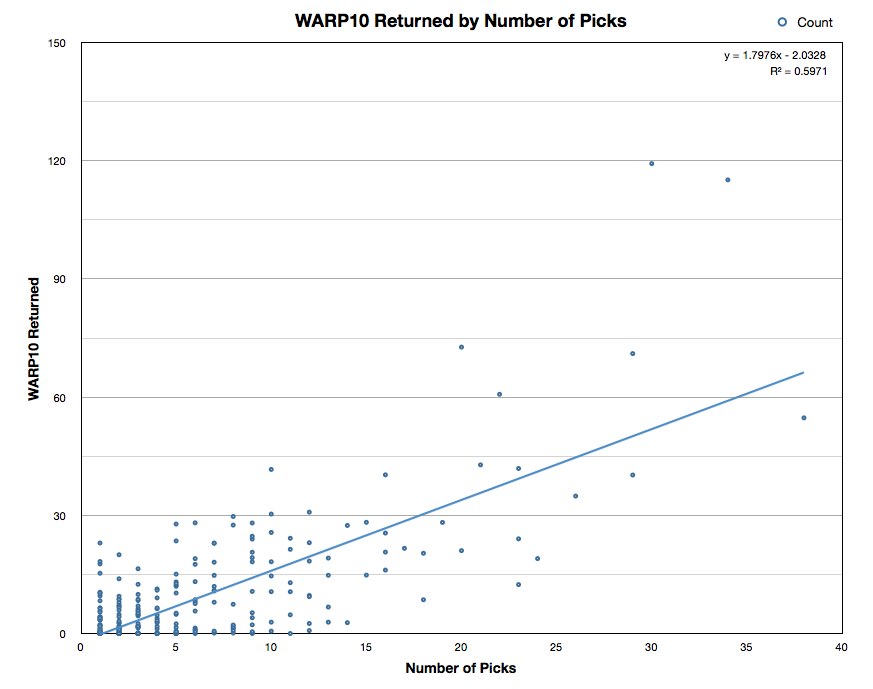 Another way to look at this data is to find the average value returned per pick. For example, if we sort the data in the ARP10 table above by ARP10 returned by pick, the rankings change significantly. Texas (1.59) drops from the top of the list down to eighth, and Auburn (2.75) jumps from seventh to first. Louisiana State (2.57) stays put at number two, but third-ranked Arizona State (1.34) falls seven spots and brings up the rear.

A total of 99 schools (23.1 percent) in the study had 10 or more players selected. When we include them, the number of programs that returned at least 2.00 ARP10 per pick increases to 10:

Similar results are seen when we re-sort the data in the AA10 table by AA10/Pick:

Average Number of Above-Average Seasons Returned by Program, Per Pick

Finally, let’s take a look at the average WARP10 returned per pick:

After looking at this data from multiple angles, it’s clear that WARP10 returned per pick is the most accurate way (of the methods reviewed) to measure each program’s value returned. ARP10/pick and AA10/pick are adequate for simply determining which programs have produced useful major-league pieces, but without considering the total WARP10 produced, the impact of those players is lost.

Next week we’ll get granular and examine which players in the study represented the greatest and worst values relative to their draft position.

You need to be logged in to comment. Login or Subscribe
Oleoay
Interesting breakdown. I see colleges like St. John's, Kentucky, BYU(!) etc and I wonder if you will include a breakdown by warm weather/cold weather colleges?
Reply to Oleoay
bradleyankrom
It's a thought, certainly something I'd be interested in seeing.
Reply to bradleyankrom
jnewfry
Why did you cut off the value at 10 years? Just curious, it's an interesting look.
Reply to jnewfry
bradleyankrom
I cut it off at 10 years because I wanted to get as many draft years in as possible while also capturing the majority of players' peak seasons. Ten years covered most players through ages 31/32 and allowed me to include classes through 2001.
Reply to bradleyankrom
psugator01
just an awesome study. this is exactly why i subscribe to BP.
Reply to psugator01
bradleyankrom
I'm glad you enjoyed it. Comments like this make it all worthwhile.
Reply to bradleyankrom
misterjohnny
Interesting, but really doesn't tell you much about a program.

So much value from so few players. Take St. Johns. Frank Viola and John Franco have 70% of the innings pitched from St. John's alum, and they last played for the team in 1981, over 30 years ago (That must have been a good team though). However, no hitters have come to the major leagues from that school.

Same with BYU. Jack Morris and Rick Aguilera represent 89% of the IP in the majors from BYU alum.

Interesting, but in the end really means nothing.

Reply to misterjohnny
misterjohnny
Edit - St. John's did have hitters in MLB, my browser wasn't showing them. Rich Aurilia - 77% of the MLB AB's from St. John alum.
Reply to misterjohnny
gpurcell
Generally the finding looks to be that the more players are drafted from a program, the more likely it is one of them will achieve HoF or HoVG performance in the majors...although there is a hint of non-linearity in the scatter plot that might indicated some additional quality to quantity.

Of course, Maple Woods CC would be ranked above all of these programs but USC and Texas....
Reply to gpurcell
bradleyankrom
Not in this study, since we only examined pitchers here. Maple Woods CC has had a few pitchers drafted, but none have made it to the majors.
Reply to bradleyankrom
zasxcdfv
I feel like a study of this would be interesting if you excluded first or first/second round talent. Stars seem to be more random but who produces good players from other spots.
Reply to zasxcdfv
bradleyankrom
If we look only at rounds 3-10, the results (ranked by WARP10) are:

Reply to bradleyankrom
rbrianc
Awesome study. This just included pitchers, right? As an Arizona State alum, I wasn't surprised we weren't close to the top for pitchers at the MLB level, but I can't wait to see a similar study for position players!
Reply to rbrianc
bradleyankrom
Yep, only pitchers here. We'll get into the hitters a little later, though.
Reply to bradleyankrom