I spend a lot of time going through archives, and any time spent in archives inevitably leads to more time in archives, because an awful lot of things found in archives seem ironic or significant in retrospect. Like this:

That’s from 1983, and coming across it by accident was like picking up a piece of litter on the ground and discovering that it’s a discarded love letter written 40 years ago by my dad to my mom. That headline is from 14 years before Billy Beane became the A’s general manager, three years before Tony LaRussa became their manager, and the first year that Sandy Alderson was their GM. It’s also a kind of a prequel to Moneyball, with some of the same themes but a different execution, more slapstick and a very different outcome.

As the story starts, Steve Boros is hired to be the A’s manager. He’s a brainy type who studied literature at the University of Michigan and is considered, if anything, too nice for Major League Baseball. During his job interview, the first question he asks is reportedly whether he’ll have access to computers. Oakland’s answer is “yes,” and Oakland’s other answer is “you’re hired.”

Steve Boros played “computer baseball” against the Detroit Tigers, and it paid off in big numbers for the Oakland A’s.

“We thought maybe the pressure of batting cleanup was getting to him,” said Boros of Murphy, who was hitting only .172 and had driven in only eight runs going into Thursday’s game.

“However, I went back to my room and looked at my computer readouts and saw that Murphy had gone 4 for 9 against Petry while batting fourth last year. So I decided to leave him right there. I’m glad I did.” 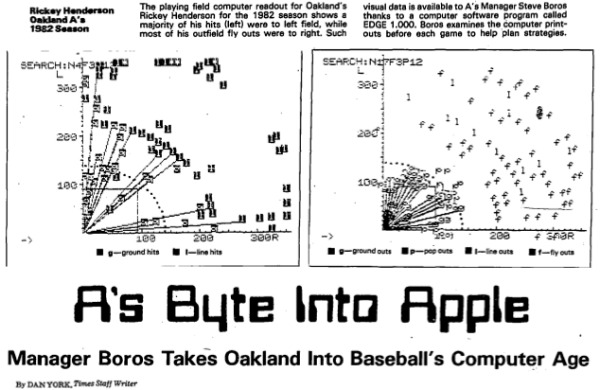 The A’s have begun to extensively use an Apple II computer to help formulate managerial and management strategy this season. Boros has instant access to an extraordinary amount of statistical information about the A’s, their opponents and the A’s minor league prospects.

Plot point 3: The establishment strikes back.

“I’d hate to run a ballclub with a computer,” (says Red Sox manager Ralph Houk), rolling his chaw of tobacco around in his mouth. “When you’ve been around, you know who can hit and who can pitch.”

"There was a feeling on the part of the front office that in light of the way the club had not only performed but the attitudes and lack of aggressiveness that the players had demonstrated that there was a need for a change in leadership."

Plot point 5: Oh that? That was nothing all along. Montage showing fade to obscurity.

“Its use last year was overstated,” Boros said. He added that “5 to 10 percent” of his decisions were based on information supplied in computer printouts. The 1983 computer costs, including travel expenses for the A’s employee who operated it, was close to $100,000.

Eisenhardt remarked that the computer’s information mostly just confirmed what Boros and his coaches already thought.

Although the computer would be retained, it would no longer be fed data on a daily basis.

Milwaukee Sentinel: “LaRussa is one of those who manages by computer.”

Philadelphia Inquirer: “He charts his defense with computers.” 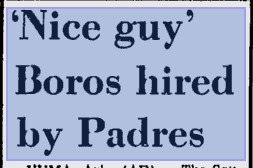 Asked about statistical applications to strategy, he smiled: "I don't want to say I use a computer, because the players don't like that.”

Obviously, the use of computers was nothing like the use of advanced analytics. “Four for nine against Petry while batting cleanup last year” is like the traditionalist’s strawiest straw man about statistics. Still, interesting to see that Oakland—and Sandy Alderson, and poor too-darn-nice Steve Boros—were trying to win on the margins two decades before Ricardo Rincon. If you're interested in more about the experiment with computers, a blog called Misc. Baseball actually wrote beautifully about this three years ago, with excerpts from a whole different set of archives.

You need to be logged in to comment. Login or Subscribe
kenarneson
The A's actually dabbled in computers before Steve Boros, when Billy Martin was still the manager. I recently got my hands on a 1982 Oakland A's media guide. On the first page, they list everybody in the front office, and one of the employees listed is Jay Alves. Alves is now a Rockies executive, but back then, his job in the Oakland front office was "Apple Computer Operator".

I have no idea what the Apple Computer was used for, but I suppose one could ask Alves.
Reply to kenarneson
lyricalkiller
It was actually originally used for the broadcasters for two seasons before Boros got there. Based on the reports at the time, it doesn't sound like it was used by Martin.
Reply to lyricalkiller
jjaffe
At the SABR Analytics Conference earlier this month, I met Richard Cramer, who created the Edge 1.000 system that the A's used. The broadcasters were into it, but Martin didn't feel the computer could tell him anything he didn't already know. The White Sox were the other early adopter, and La Russa, in his first job as manager, was open-minded enough to be interested in what the Edge system could tell him. A young Dan Evans ran it, and when the Yankees bought in, a young Doug Melvin ran their system.

There's plenty about the system and the industry reaction in Alan Schwarz's fascinating book, The Numbers Game.
Reply to jjaffe
JimmyJack
The "Numbers Game" is a great read!

If you enjoyed "Moneyball" it is a worthwhile book.
Reply to JimmyJack
jj0501
Very good article. I'd like to hear more. It's kind of like tracing who made the first rock and roll record. A Jay Alves feature is in order.
Reply to jj0501
JOARGE9481
Nice article, but what is with the numbers under each BP Subsciber's name? Are we in Ayn Rand's "Anthem"?
Reply to JOARGE9481
BurrRutledge
Yes. Yes, we are.

Have a great weekend.
Reply to BurrRutledge
Behemoth
It just tells us who is the best person. Unfortunately, you have the highest number, so you lose. I also have quite a high number, but I'm OK with not being one of the best people.
Reply to Behemoth
tbwhite
I want to know when BP is going to run an article on commenter analytics. Who is the most prolific commenter ? Which commenters have the highest/lowest average rating , etc ? Inquiring minds want to know.

P.S. - please like this comment so that my average rating increases, thanks in advance.
Reply to tbwhite
misterjohnny
That P.S. is just screaming for abuse. (I didn't unlike you though, but I thought about it)
Reply to misterjohnny
tbwhite
I'm disappointed, you know we "low numbers" need to stick together. We're more equal than the others, we are the 1%(perhaps literally if JOARGE9481 isn't a newcomer to BP).
Reply to tbwhite
acflynn
Agreed. As my 4-year-old says, "low numbers rule and high numbers drool!" (paraphrased) or something.
Reply to acflynn
beeker99
Just so long as you double digit folks don't exclude us triple digit folks.
Reply to beeker99
dpease
The number is your cool ranking.
Reply to dpease
tbwhite
So, who's the coolest one of all ?
Reply to tbwhite
BurrRutledge
Surely that distinction would go to a member who is distinguished by a palindrome which is the multiple of the 7th prime by the 12th prime by three cubed. Or maybe by the multiple of the uniform numbers of Hall of Famers Babe Ruth, Jimmie Foxx, Earl Averill, Bob Feller, and Casey Stengel.

Or maybe not.
Reply to BurrRutledge
tosaboy
I liked you.
Reply to tosaboy
yadenr
So your Dad is Billy Beane and your mom is Tony LaRussa?
Reply to yadenr
AirSteve01
I just posted to find out what my Anthem Number is.
Reply to AirSteve01
buddons42
Oh thanks, now everyone knows you're a better person than me.
Reply to buddons42
jedjethro
"Its' computers .. San Dimas High School football rules!"
Reply to jedjethro
Nez2929
Gotta know my number. too. I remember that using the computer was mainly mocked--wasn't there a SPORT magazine article about it? Bill James also didn't seem all that enthusiastic, if I recall the tone on an Absreact "manager-in-a-box" feature about Boros, who seemes overly in love with speed. maybe?
Reply to Nez2929