This video has been making the rounds this morning, but that's only because it is the greatest thing ever:

For those who don't know, this is the new home run structure the Miami Marlins have installed in centerfield of their new ballpark. Every time Giancarlo Stanton or Hanley Ramirez or any other Marlin hits a home run, the structure will perform the dance you see in that video. I would imagine a Gloria Estefan version of "The Natural" theme music will play over the stadium's speakers as it dances, but we'll have to wait until the baseball season starts to know for sure.

Dave Brown of Yahoo! Sports describes the contraption as the "unwanted zombie lovechild of a pinball machine, a carnival roller coaster and a diabolical cuckoo clock." His reaction – while much more colorfully said than everyone else – is pretty common. In short, this Miami Home Run Machine is not very popular. I say that's rubbish! This promises to be one of the more memorable and fun home run celebrations in all of baseball, right behind Bernie Brewer's slide and Billy Beane's desk throw.

One last thing: this video does a poor job of translating just how massive the structure is. Though it looks like it could be somewhere in the 10-to-15 foot tall range, the new display is much closer to 30-to-35 feet tall. Look at the three construction workers below, basically standing one on top of the other. They only cover half the height! That's roughly 18 feet of hard hats and visibility vests, and you could easily fit two or three more workers under them. The new Marlins obviously subscribe to the "Go big or go home" look on life. I'm not complaining.

UPDATE: If you're wondering how the display might look with music playing in the background, watch the Marlins sound test here, with songs such as the "Magnum P.I." theme, the "Mad Men" theme, and the Star Wars Cantina Band playing over the show. 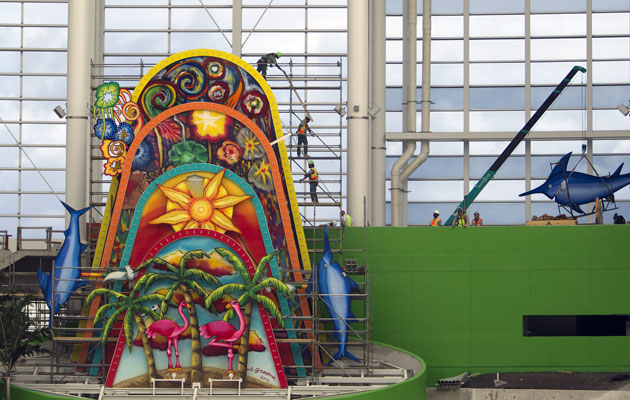 You need to be logged in to comment. Login or Subscribe
crperry13
I tried to find an adjective to describe that structure, but my Thesaurus imploded.
Reply to crperry13
sbrousc
Here's hoping the stadium plays like Citi field circa 2010.
Reply to sbrousc
aquavator44
As someone about to get his MFA in studio art, I love anything that brings art to my favorite game. I'm not a huge Red Grooms fan, but anything to keep MLB from becoming overly homogenized and corporate is okay by me. For those of you who think it's garish and gaudy, well, isn't that what professional sports are all about in 2012? This is much less of an eyesore than a giant Budweiser sign.
Reply to aquavator44
cfinberg
Point well taken: uniqueness is the new market inequality. That said, it's been statistically proven that the Groomstrosity is a virtually equivalent eyesore to a replacement-level Budweiser sign.
Reply to cfinberg
boards
When this first came to light a few months back, I was in the group that thought it was an abomination. Well, okay, it is. It seems awfully, shall we say, low-tech by today's standards.

However, I've had a "get off my lawn" revelation. I grew up thinking the exploding scoreboard at the Astrodome was the coolest thing ever. I'm certain that many middle aged baseball fans thought it made a mockery of the game. So I say if those crazy kids in Miami want their garish home run monstrosity that makes us middle aged baseball fans of 2012 uncomfortable, good for them. Well played.

I also agree with Patrick, it's much less unpleasant than a giant Budweiser sign (or a giant Budweiser, for that matter).
Reply to boards
onegameref
There must be some musical accompaniment right? Otherwise it sounds like an old locomotive trying to make it up a too steep hill. Very creative though. Those jumping marlin sure look nice. They would look nice hanging on a den wall too.
Reply to onegameref
lgranillo
I included this above in the update, but you can see what the display might look like with musical accompaniment here: http://www.baseballprospectus.com/article.php?articleid=16307

Magnum PI and Game of Thrones seem to be the favorite, but I really like the Cantina Band as well...
Reply to lgranillo
eighteen
My reaction wasn't revulsion or disgust so much as "Really? That's the best you can do? You take $500 million from the public, and that's the best you can give back?"
Reply to eighteen
ofMontreal
I frickin' love this thing. Although it needs a clincher of some kind. Maybe there will be music of some kind.
Reply to ofMontreal
mtr464
I love this thing.

I love their new logo.

I have come to accept I love things that are tacky and colorful.

(of course, who knows how much of a licensing fee they'd charge you)
Reply to Richie
cfinberg
Hideki Matsui does have a little free time on his hands these days...
Reply to cfinberg
mhmosher
Befitting of the franchise.
Reply to mhmosher