About 10 days ago, Ben Lindbergh wrote about five pitchers who are expected to make the transition from the bullpen to the rotation, examining their chances of doing well in their new roles.

In the paragraphs that follow, I’ll have another look at data pertaining to this subject.

You’ll read about what happens when pitchers have to face the opposing lineup multiple times in a game, the importance of the number of available weapons (read: pitch types) in their arsenal, and the differences between going at full strength for short outings and pacing oneself for a prolonged effort. While all the above should have whetted your appetite, I have to admit that, at the end of the article, you won’t find the ultimate formula for identifying the best candidates for a role switch.


The Rule of 17
More than two years ago, analyst Tom Tango, working with data from 1953 to 2008, proposed the “rule of 17.” Comparing stats from pitchers when they started to the ones they compiled coming from the pen, he found that pitchers allow 17 more points of BABIP, get 17 percent fewer strikeouts per PA, and allow 17 percent more home runs per contacted PA when starting.

There are various explanations for why pitchers compile better numbers when relieving:

Thus, when a pitcher is asked to make the transition from the bullpen to the rotation, he must necessarily change his game: he has to save some of his energy for late in the game, he has to be able to work at less than full capacity, and he has to mix his pitches, keeping in mind that he’ll have to face the same batters again.

Here’s what C.J. Wilson had to say about the change in role when interviewed by David Laurilia back in August 2010 (the interview is also available in Best of Baseball Prospectus 1996-2011 vol.1).

As a starter…you’re trying to minimize pitches so that you can throw more innings. As a closer…you’re going for 0 percent; you’re pitching for 0 percent. I was always trying to pitch for 0 percent and pitch to the ultimate hole—my strength versus their weakness, my strongest point against their weakest point. As a starter, you just kind of take your strengths against whatever. You just stick with your strengths, which is a little bit different, because you don’t really have the luxury of nibbling or taking so much time.

Going through the lineup multiple times
If you casually look at pitcher’s splits, you might be tempted to state that starters get some new life late in the game.

For example, take Chris Carpenter. During his career, he has allowed an OPS of .676 the first time he went through the opposing lineup. The second time around, the hitters being accustomed to some degree to his stuff, and Carpenter being just a bit less fresh, his OPS against has been .745. In the third round of work, he’s a bit more tired, and his opponents have had a couple of plate appearances to time his offerings, so his OPS skyrockets to… hold on, it’s a bit lower at .732, and the fourth time through the lineup, it goes down to .682! I’ve obviously done some cherry-picking here. However, if you look at other active pitchers’ splits, you are going to find a similar pattern.

In fact, when I looked at data from every pitcher during last season, I got the following expected runs allowed per PA. (As it was when I evaluated catchers’ game calling, run value is based on batted ball type rather than outcome, in order to remove the effect of defense).

If the selection bias bell is ringing in your ear, you are absolutely right. There are two selection biases combining to produce the numbers above:

In summary, the final line of the above table is an average of the best performance by the best pitchers.

To have a fairer look at the issue, I compared things within each pitcher/game combination. For each pitcher, I calculated the runs per PA as above for every game played. Then I compared the R/PA each time through the order in the game to the R/PA for the entire game, thus obtaining a delta R/PA (negative when the pitcher allows fewer runs).

As you can see, there is no such a thing as a late resurgence. Pitchers perform worse later in the game, whether it’s because they are tired or because the batters have timed them (or a combination of both).

Allow me to briefly digress. If you look at historical pitcher splits by times through the order, you’ll hardly find the late resurgence artifact. That’s because decades ago, pitchers were often left on the mound till the end of the game, no matter what happened. See, for example, Baseball-Reference times through the order stats for Don Newcombe. Others I found showing similar patterns are Bob Feller, Robin Roberts, and Whitey Ford.

Pacing
So, pitchers making the transition from the bullpen to the rotation are expected to record a worse ERA because they have to go through the lineup multiple times instead of just once (and likely not through the entire order). We have mentioned before that starting pitchers need to have a different approach against opposing batters: they have to pitch in a way that allows them to last several innings, and they must play their cards in earlier stages of the contest keeping in mind that the same hitters will be up against them later in the game.

Thus, since they (contrary to what closers do) can’t go all out when facing the lineup for the first time in a game, there should be some additional improvement in their performance as measured by runs allowed. In order to get a feel for the magnitude of said discount (and, actually, to check whether this pacing thing is something that actually exists), I looked at pitchers who both started and closed at least five games in a single season during the PITCHf/x era (2008-present).

For every pitcher, I compared the runs allowed in the first inning when starting against runs allowed in the ninth when closing. While it’s not true for everybody, the chart below indicates that when pitchers know the inning they are playing is their first and the last for their night, they perform slightly better than when they are expected to go for several frames. The difference, on average, is 0.02 runs per PA. 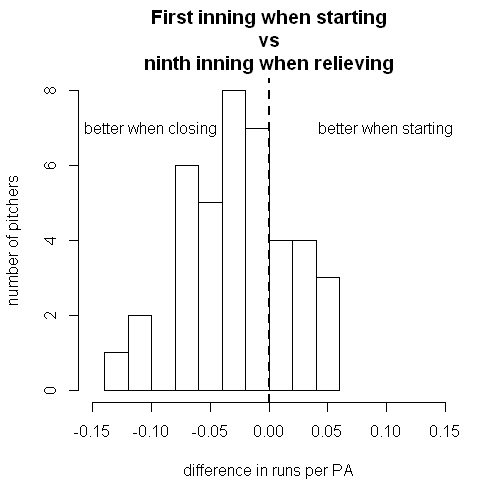 I also looked at fastball speeds in order to gauge the effect of pacing from a different angle. Again, I considered the same pitchers above and compared their fastball speeds in their first inning of work in games they started and games they finished. Their arm should have been equally fresh in either instance, since it was their first inning of work in both cases. However, as you can see below, most pitchers threw harder when closing. The average difference was 0.9 miles per hour. 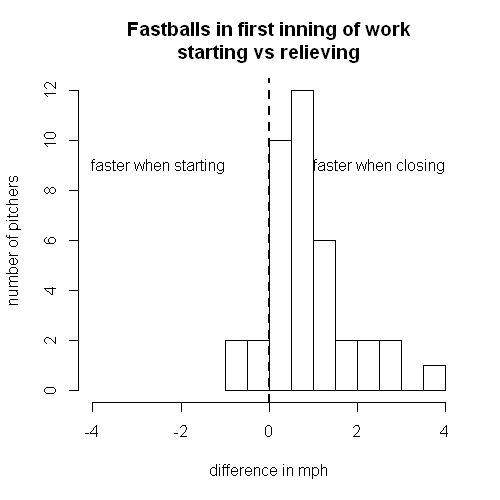 Does the number of weapons matter?
Mariano Rivera gets his job done essentially using one pitch. Brad Lidge earns his money by mixing a fastball and a slider. Many top relievers need only couple of pitches to be effective. That’s not the case for starters, if you don’t consider knuckleballers.

Here is the distribution of pitchers by role and number of secondary (i.e. non fastball) pitches.

Let’s see how the “multiple times through the order” decay affects pitchers relative to the number of weapons in their arsenal. 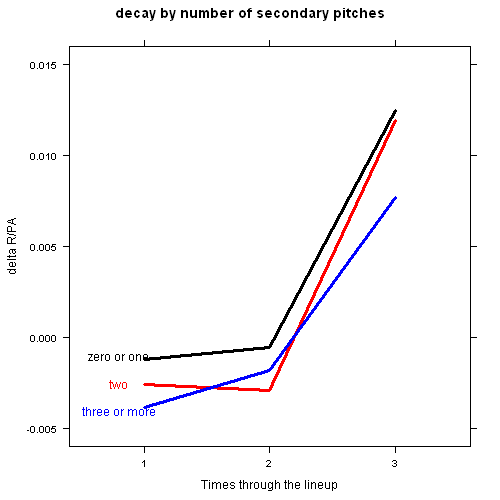 No strong conclusion should be drawn from the above graph. However, as one might expect, pitchers with a richer arsenal experience milder declines when going through the lineup multiple times.

The five guys
Let’s briefly get back to this spring’s five candidates for a transition.

Mastering a change-up that is more than a show-me pitch is vital for pitchers due for the transition. Chris Sale is the only one of the crop already confident in throwing pitch number three, so I perfectly agree with Ben Lindbergh’s ranking him as the best candidate for success. Since the change-up is the pitch least affected by the platoon, the left-handed Chapman is the one most in need of it—so, again, I’m with Ben in being skeptical about his successful transition.

Meanwhile, a less-than-successful spring in the new role seems to have brought Bard’s new starting career to a halt. Neftali Feliz has experienced stiffness in his shoulder in a shortened third start, but there haven’t been hints about his interrupting the experiment as of yet.

You need to be logged in to comment. Login or Subscribe
wilymo
when does samardzija start getting mentioned with this group. seems like his transition might actually be going the best of all of them right now. crow's already been 86'd back to the pen, bard and chapman seem like they're not far behind
Reply to wilymo
maxtoki
Third pitch for him is the Splitter, thrown over 10% of the time: more than a show-me pitch.
Reply to maxtoki
surfdent48
A two-seam fastball (sinker) is enough of a different pitch than a four-seamer that I hope pitch/FX soon separates them for percent thrown and velocities.
Reply to surfdent48
bartelsjason
Any updates on these guys? I have a draft on Sunday and I like all of these guys as experiments, but am curious as to who I should target and in what order.
Reply to bartelsjason
maxtoki
Crow should by out of the Royals rotation.
Bard, Feliz and Sale are still considered as starters.
Finally, Baker has not made up his mind yer on Chapman.
Reply to maxtoki