We may not be wiser than projection systems, but we like to pretend we are anyway, especially when it comes to bold predictions. Make your bold prediction in the spring, forget about it in the summer, remember it in the fall, and spend the winter disowning it. Then do it all again next year. My chat from last week yielded this exchange and reminded me that the new prediction season is underway:

mdthomp (ILSTU): R.J, Which team do you expect to post the largest improvement on wins from last season? Also, who is going to be the opposite? My money is on the D-Backs to fall and the Nats to improve the most? What you think?

R.J. Anderson: I could see that on both ends. In fact I might say Arizona, too. I think Cincinnati is another team to watch for to improve their record by the most.

The above should be enough to convince everyone that I’m not the best at bold predictions. It’s not particularly brazen to pick either the Reds or the Diamondbacks. Both are rather obvious selections. The Reds added Mat Latos and Ryan Madson and have Joey Votto and Jay Bruce already in tow. It doesn’t take much intelligence to realize that they might play better this season.

The Diamondbacks are about as obvious as picks come. Bill James’ Plexiglas principle states that teams who improve dramatically in one season are likely to decline in the next. Additionally, over time, good teams will get worse and bad teams will get better—another example of regression to the mean in action.

Being conservative doesn’t often translate to interesting selections, since everyone wants to know the identity of the next big outlier, the next team equivalent of Jose Bautista. Bautista became the first player in league history to have a 50-home run season without a previous 20-home-run season under his belt. We’re all on the lookout for another, similar surprise. The problem is that there might not be another Bautista for decades, so searching for the next could be a fool’s quest.

Searching for the next Diamondbacks might be more fruitful. Yes, the D-backs could collapse this season, but they did come out of nowhere last year to make the playoffs. If it feels like there is a story similar to Arizona’s every season, it’s because there is. Consider the table below, which shows the largest year-over-year team improvement in every season since 1998:

The smallest improvement is 15 wins—or enough to make a slightly-below-.500 team into a playoff contender. One thing that should be obvious about these teams is that they started below contention. Good teams can improve, too, but it isn’t often that you see a 95-win team add 10 wins or a 90-win team add 20 wins. Here is a graphical look to provide a sense of how the average improvement compares to the largest improvements listed above: 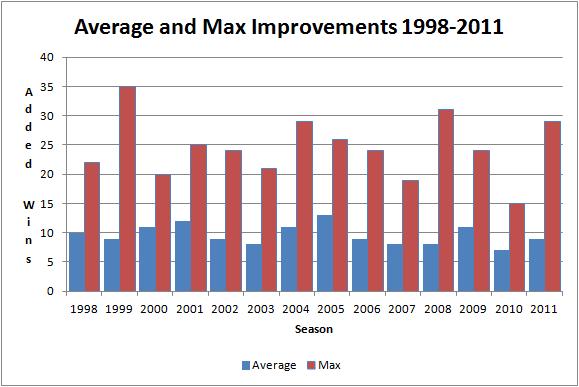 Now that we’ve established that seeking the next Diamondbacks is potentially a more rewarding pursuit than seeking the next Bautista, let’s get to hunting. There is no wrong way to go about this, but to make up for being a boring bold predictor, I took the teams that finished last season below .500 and scratched off the banal choices. This means the Reds and Nationals are gone, as are the Marlins. From there, I drew a line through the Cubs, Mets, Astros, and Orioles, since—as everyone knows—they’re entering rebuilding phases. The Pirates’ and Royals’ future world domination plans are known well enough to be treated as no-brainer picks, too.

All that eliminating left six teams to parse through, reason about, and ultimately crown the next Diamondbacks. Luckily, PECOTA does not project any of the six teams to finish at .500 or better—a relief, since I want to tested my guts against its superior intellect. Trying to forecast an outlier is an inherently unscientific exercise, but let’s go through each of the six and figure out which of the bunch is most likely to be the next Diamondbacks.

Team: Chicago White Sox
PECOTA says: 77 wins (-2 wins from last season)
Summary: Adam Dunn and Alex Rios combined to hit .197/.278/.317 while sucking up 17 percent of the White Sox’ plate appearances last season. A return to their respective glory days might not occur, but they should be better than they were in 2011. Gordon Beckham and John Danks seem like decent bounceback candidates as well. One major concern is that Paul Konerko will succumb to the effects of aging. The White Sox love making PECOTA look silly and do play in a weak division, but a lot has to go right for them to make the leap.
Gut feeling: Probably not.

Team: Oakland Athletics
PECOTA says: 73 wins (-1)
Summary: You’ve seen most of this story before. If Oakland’s young pitching excels and the veterans stay healthy and do their thing, this can be a decent team. The two wild cards are Yoenis Céspedes and Manny Ramirez. Céspedes could struggle to adjust to major-league pitching, though the A’s fortunes would shift if he hits the ground running and Ramirez returns in June looking like vintage Ramirez. The odds of all of that occurring are small.
Gut feeling: Not likely.

Team: Seattle Mariners
PECOTA says: 70 wins (+3)
Summary: Adding Jesús Montero should help the ailing offense. Similarly, a more seasoned Dustin Ackley and fully healthy Justin Smoak should give the M’s a better lineup than the ones they’ve trotted out in recent years. The pitching and defense will remain solid, but questions about Ichiro, Chone Figgins, and Franklin Gutierrez’s abilities as hitters make this a team on the way up but not all the way there yet.
Gut feeling: Maybe next year.

Team: Minnesota Twins
PECOTA says: 77 wins (+14)
Summary: Health is the key. Terry Ryan added pieces like Jamey Carroll, Ryan Doumit, and Josh Willingham to a roster that needs Joe Mauer and Justin Morneau to stay on the field. Baseball benefits when those two are hearty, hale, and producing, but gambling on health to improve with age seems like a losing proposition.
Gut feeling: Too risky for comfort.

Team: San Diego Padres
PECOTA says: 79 wins (+8)
Summary: In 2010, the Padres went 28-22 in one-run games. In 2011, the Padres finished with a league-worst 20-31 record in one-run games. Josh Byrnes added Carlos Quentin, Edinson Volquez, and Huston Street, among others, and has a farm system brimming with talent. If the Padres catch a few breaks, they could make a run similar to 2010, but this team seems to lack an impact talent to hang your hat on.
Gut feeling: Too bland for comfort.

Team: Colorado Rockies
PECOTA says: 80 wins (+7)
Summary: The Rockies, on the other hand, have a superstar shortstop in Troy Tulowitzki, and two good outfielders in Carlos Gonzalez and Dexter Fowler. Add in Michael Cuddyer, Marco Scutaro, Casey Blake (if healthy), Todd Helton (if he can continue to defy age), and Ramón Hernández, and the Rockies have buttressed their core with a solid cast of supporting characters. The only catch is that the Rockies’ rotation is a mess, though they do have plenty of options to throw out on the Coors Field mound to see what sticks.
Gut feeling: This could be the team.

There you have it: my risky, projection-system-defying pick for 2012 surprise team is the Rockies. Just don’t hold it against me when the only thing they win is the first-overall pick in next year’s draft.

You need to be logged in to comment. Login or Subscribe
touchstone033
It's too bad you used an arbitrary cutoff point of .500 for teams, because you missed the two obvious breakout candidates, the Kansas City Royals and the Miami Marlins.

One factor you didn't include in your projection was the quality of opponents, especially with an imbalanced schedule. Both the Marlins and Royals play in very vulnerable divisions. The AL Central may be the weakest in baseball, and the NL East shows signs that a shift in power is underway, with the Phillies likely declining and the Mets possibly losing 100 games this year.

I could see both teams winning 85 to 90 games this year.
Reply to touchstone033
jlong82
"and scratched off the banal choices. This means the Reds and Nationals are gone, as are the Marlins."

"The Piratesâ€™ and Royalsâ€™ future world domination plans are known well enough to be treated as no-brainer picks, too."

It wasn't because of the cutoff point. He didn't include them because they were both obvious picks.
Reply to jlong82
cfinberg
Fenster: You do some time, they never let you go, you know? They treat you like a criminal. Iâ€™m not a criminal.

Hockney: You are a criminal.

Fenster: Now whyâ€™d you got to go and do that? Trying to make a point.
Reply to cfinberg
mdthomp
gotta love my question leading to a column!
Reply to mdthomp
mnsportsguy1
I would easily predict the Twins to gain the most win from last year, but even if they do add something around 20 wins, thats still not even contending, despite a horrible division.
Reply to mnsportsguy1
sordfish
Indians were 80-82 - are they a semi-banal choice then?
Reply to sordfish
ofMontreal
I agree! Indians & Blue Jays top teams to bust a big move. Both have lots of things that could go good for them with no obvious weak spot.
Reply to ofMontreal
pobothecat
Sure might pick Toronto to most outperform its PECOTA. Miami 87, Cincinatti 86, Cleveland 81, Toronto 77.
Reply to pobothecat
rawagman
If the purpose is to find a team that can improve by 15+ games, it would be foolish to pick a team that was so close to .500 to begin with. Easier to pick a team that won 70 to improve to win 85+, than a team that won 80 to jump to 95 wins.
Reply to rawagman
Robotey
sorry RJ, but upon further review I gotta say Rockies are a 'banal, conservative' pick and they ought to be disqualified for the same reasons as Cincy or Miami. They're still the core of a very good team, they just had a bad/unlucky year last year. They underperformed mightily and they play in an eminently annually winnable division--the antithesis of NL East. Compare picking the Rox to picking the Snakes last year at this time, or even the Padres in March 2010. See what I mean? It's just not the same boldness.

So let's try again. Be bold. Which team would you have to be nuts to say is the one that you think is going to shock folks in a way that no one could have claimed to have seen coming? Yes, I understand this is oxymoronic--asking you to predict the unpredictable, but that's what March is all about.