Last week at this website, Adam Sobsey opined that baseball players are less interesting now than they used to be. That may be so, though I think it is at least arguable (as Mr. Sobsey mentions in the article) that much of their oddball nature has been pushed underground, suppressed by a culture that seeks either to worship or destroy its athletes.

A case in point is Boston Red Sox pitcher John Lackey. Lackey (and his contract) generated high expectations when they came to the Red Sox from Anaheim. Whether those expectations were justified is another issue, but his pay and previous success pointed toward at least adequate things, if not great ones. For the most part, the results haven’t been either great or adequate. The John Lackey Boston received has been, in order, adequate, historically awful, and now, injured.

Last year is when things really fell apart for Lackey professionally, personally, and health-wise. Without the on-field results to keep it at bay, his competitive nature led to many an animated moment. In case you weren’t following Lackey or the Red Sox last season, the 2011 John Lackey experience* can be understood in seven easy-to-follow steps:

* The Lackey Experience should be an amusement park ride. It would go like this: enter a cylinder. You are strapped in with a top strap that goes across your forehead. The cylinder closes, all the lights go out, and you hear a voice say, “…and here’s the 2-1 pitch…” You hear a loud crack, and the machine whips your head to one side while your body turns 180 degrees and leans back to watch the ball go. You hear. “[F bomb]!!” Then the lights come on, someone hands you a million dollars, and you exit the ride.

When he was pitching well, his fiery demeanor led Angels fans to love him and other fans to savor his few failures like delicious pie. In another era, his demonstrative nature might have been deified, but in this one it has become fodder for internet slugs such as myself to make fun of him. I admit it. I’m an internet slug. Ribbit.*

*What sound do slugs make?

Because of the increasing disunion between Lackey’s results and his personal expectations, a corresponding gulf of on-field behavior arose for us to amuse ourselves with. If the GIF wasn’t invented with John Lackey in mind, it’s just one of those lucky cosmic accidents that both exist at the same time, like 90 feet between bases, pudding baths, or six-toed cats. There are numerous examples of Lackey-inspired GIFery that lend a comical quality to what might otherwise be sad through the wonder that is continuous repetition. For instance, there’s this one, in which Lackey, in obvious allusion to the great Carlton Fisk’s homer in Game 6 of the 1975 World Series, attempts to control the ball’s path with sheer willpower. Unlike Fisk, who willed the ball just fair, Lackey tried to will it to stop and fall straight to earth, much like the heart of a Red Sox fan looking at the details of his contract.

Most Lackey-related GIFs culminate in the falling of an F Bomb, not unlike this one, a monumental work of minimalism.

Some others are more complicated. These may involve “tongue sticking,” which can sometimes be followed by “tongue eating.” After giving up a rocket that just took out the rear window of a Lexus two zip codes away, what else is there to do while waiting for the manager than to chew on one’s tongue a bit?

If nothing else, this activity can help psych one up to summon the appropriate glare for the manager, as seen here: 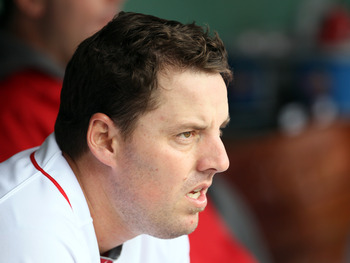 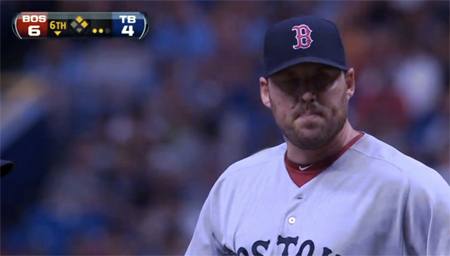 I’ve spent the better part of 700 words giving John Lackey a hard time, and if you’re reading this hoping that the next 500-plus will be different, I have some bad news for you. But before we get to those, it should be noted that Lackey hasn’t done much to avoid his status as an easy target. His gesticulations on the mound can easily be interpreted as showing up his fielders. This applies to both his in-the-moment reactions and after-the-fact interviews, though he has owned up on occasion (for evidence of that, please see his player comment in Baseball Prospectus 2012).

Despite all the talk about Lackey’s pitching and behavior on the mound, not much was known about his comportment in the clubhouse. However, through some intrepid news-type reporting, we’re starting to learn more and more about the mystery that is John Lackey’s off-the-mound behavior. Even though I’m admitting to a kind of internet voyeurism, I’m still a little giddy about this.

The nugget that revealed the real Lackey to the world appeared in the bottom of an otherwise banal spring training article on players working their way into shape for the regular season. Specifically, Red Sox pitcher Daniel Bard, trying to make the jump from reliever to starter, was asked about his pre-game routine. Bard launched into a soliloquy about the different routines he had seen from various starting pitchers during his time with the Red Sox. In the middle of the answer lay this gem: “[John] Lackey walks around with no pants on, bounces a baseball, eats peanut butter and jelly.”

That, dear readers, is how John Lackey prepares for a baseball game. Does he study game notes? Watch tape? Listen to music? Nope. Get pantless with a peanut butter sandwich? Yup. It’s the pre-game routine that gets him ready for success. Also, please note that the word “routine” according to the Google machine, means “A sequence of actions regularly followed.” Meaning: this isn’t a one-time thing. John Lackey does this a lot. There was a time in my life when finding an adult who acted in that fashion might have caused me to change religions.

Lackey sounds more like a college roommate of mine* who was known to shuttle in his underwear between the bathroom and dorm room oblivious to anyone else who might be in the hallway on Parents Weekend than a liberally compensated major-league pitcher.

* I should note there was nothing in the article to suggest that Lackey sleeps all day, doesn’t attend classes, and spends his weekends drowning in Schlitz.

If we're lucky, Lackey’s pre-game preparations will spawn a craze, though there are certain situations where they would be even less appropriate.

At the very least, this revelation will render Lackey’s comeback more compelling. Now we’ll wonder not only whether he’ll return to form, but whether he’ll experiment with other condiments or states of undress in an attempt to change his luck. Regardless of the results, it’s possible that by the time he retires, his greatest contribution to baseball won’t have come from his Texas-sized fastball or bulldog demeanor on the mound. Thanks to Lackey, we may be entering a time of new social norms constructed not from the dust of history, not handed down and ingrained from thousands of years of now out-of-date ideas, but constructed around the central idea of comfort. And peanut butter. That qualifies as character, right?

Clearly this isn't inspiring discussion though. Maybe I should take a position on Lackey's usage of peanut butter... I'm for it!
Reply to mattymatty2000
gizrock13
i read this only because im a redsox fan i had no idea what i was getting myself into this article is great so i read ur other 3 on here and ur hysterical
Reply to gizrock13
jamesman
Great! This is why I subscribe to BP.
Reply to jamesman
cfinberg
I admit that this ISN'T why I subscribed, but dammit maybe it will have to be from now on...
Reply to cfinberg
FrankL
Makes one wonder if chicken in the Sox clubhouse was fried in peanut oil.
Reply to FrankL
greendrummer
thanks for the dignified discussion of Lackey's pathetic behavior
that was about as civil as one could make it
its always disturbing when people that have gifts the rest of us don't make further light of that fact by acting like a first class low life in public on a regular basis
Lackey's always been one of those guys, we just tolerated it because he was winning
game over D Bag
Reply to greendrummer