My working theory was that it began with Scott Podsednik. In December 2004, White Sox general manager Kenny Williams sent slugging left fielder Carlos Lee to the Brewers for a three-player package that included Podsednik, who was coming off a so-so season as Milwaukee's center fielder. He had stolen 70 bases and bopped 12 homers—a nice return in the fantasy realm—but had hit just .244/.313/.364. His .237 True Average was hardly anything to write home about, and here at BP, both Christina Kahrl and Joe Sheehan tossed around phrases like "as a hitter plugged into left field, the nicest thing you can say is that he makes a great part-time center fielder." At the time, the Sox were set with an All-Star caliber center fielder in Aaron Rowand, 27 and coming off a breakout .310/.361/.544 campaign, which didn't exactly clarify matters.

Despite Podsednik's offensive shortcomings, manager Ozzie Guillen stuck him in the left field spot vacated by Lee, and batted him leadoff as well. Podsednik didn't set the world ablaze, but he did improve to .290/.351/.349, stole 59 bases, and jumped from 1.2 Fielding Runs Above Average to 12.3. The team's Defensive Efficiency jumped to .711, a gain of 13 points relative to league average, and the Sox improved from 83 wins to 99 en route to their first world championship since 1917. Speed and defense came in vogue, teams stuck extra speedsters into left field, and suddenly, left field production dropped off around the majors.

Of course, myths abound in that narrative. While improved defense didn't hurt their cause when it came to run prevention, the Sox hurlers improved by significantly trimming their home run and walk rates, dropping from 1.4 per nine to 1.0 on the former, and from 3.3 per nine to 2.8 on the latter. Their offense actually fell off, from 5.34 runs per game (third in the AL) to 4.57 (ninth), kept afloat in large part due to their reliance on the long ball; more than 42 percent of their runs came via home run, a stat Sheehan christened the Guillen number. And while Podzilla's .254 True Average and high stolen-base total may have been the vanguard of slappy speedsters stashed in left field—players such as Brett Gardner, Juan Pierre, Gerardo Parra, Michael Brantley, and Martin Prado representing the most recent crop—the slide in production goes back even further.

Per Bill James' theoretical Defensive Spectrum—which runs DH-1B-LF-RF-3B-CF-2B-SS-C—the positions to the left of the spectrum, which require far less defensive skill, are the ones where offensive production is supposed to be the highest. Yet as I showed last week, the reality is messier, and inefficiencies abound. At times over the past 62 seasons (1950-2011), left field has rated as the most productive position according to True Average, but at times it has fallen below right fielders. This past season, it even slipped below center fielders—the first time that's happened since 1966; from 1955-1966, it happened four times, with center field offense bolstered by the likes of Willie Mays, Mickey Mantle, and (for the first part of that stretch) Duke Snider. Here's how that production looks relative to the other left-spectrum positions as well as the other outfielders, first displayed year by year to illustrate that there's some amount of fluidity: 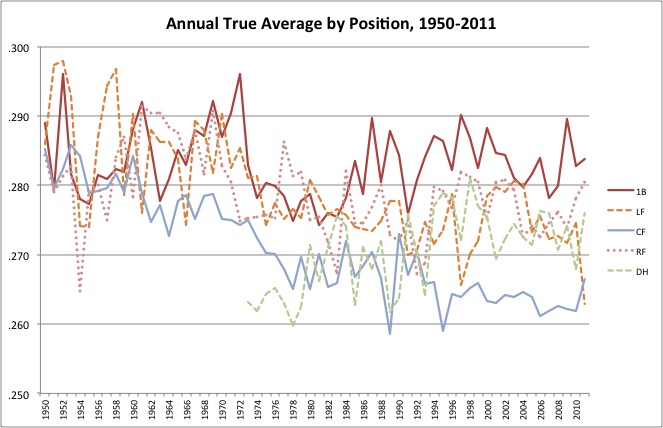 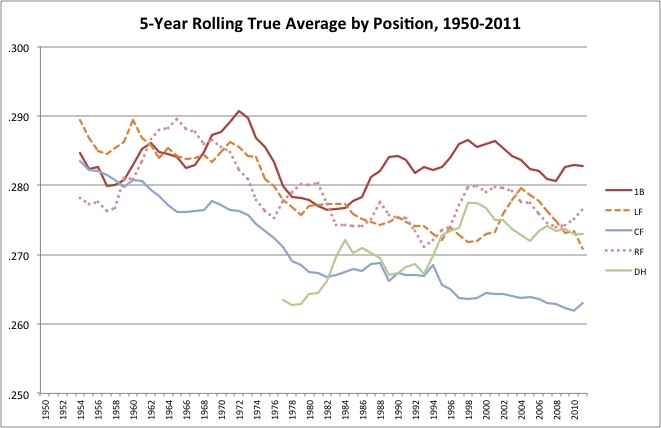 As you can see, despite the difference in defensive skill—right fielders are generally chosen for their arm strength, because the ability to make the long throw to third base is an important deterrent—left field and right field have been battling for offensive supremacy for over six decades. In fact, right fielders have come out on top 32 times in that span, compared to 29 for left fielders, and in recent years, the imbalance has been even more drastic: 22-13 since 1977 (when the majors expanded from 24 to 26 teams), 13-6 since 1993 (when they expanded from 26 to 28 teams), and 10-4 since 1998 (when they expanded from 28 to 30). This latter day imbalance happened in spite of the contributions of Barry Bonds, who posted four of the top six True Averages of the past 62 years as a left fielder, all from 2001-2004. Left fielders outproduced right fielders in those latter two years, but by less than a point in 2003; without Bonds, they would not have. The margin in 2004 holds up even without Bonds' .424 TAv—he singlehandedly elevated the MLB averages at the position somewhere between 3-5 points during that four-year period—but since then, the only time left fielders have outproduced right fielders was in 2006.

This muddies the waters a bit, but consider the growing number and percentage of players classified as left fielders in our sortable stats—those who merely spent the majority of their time there—with True Averages of .270 or less, and at least 400 plate appearances overall—regulars or near-regulars, in other words:

While the ranks include NL MVP Braun, notable breakouts Gordon and Parra, and a rebounding Lee, busts abound. Wells (who moved from center field) and Crawford had disastrous years while moving to new teams. Bay and Soriano continued plummeting into mediocrity while anchored to immovable big-money contracts. Ibanez collapsed at age 39. Young fell off after a productive 2010, contributing to a Vortex of Suck, the majors’ worst showing at the position by a given team. Prado (who moved from second base), Gardner, and 2010 AL MVP Hamilton all fell off considerably from the previous year. Pierre, Guillen’s pet left fielder in the absence of Podzilla, had absolutely no business being an everyday player in the first place—but at least he had consistency going for him, right?

It might be easier to appreciate the longer-term dropoff at the position using traditional slash stats instead of True Average. Here's what left fielders’ on-base and slugging percentages have done relative to MLB averages since 1950: 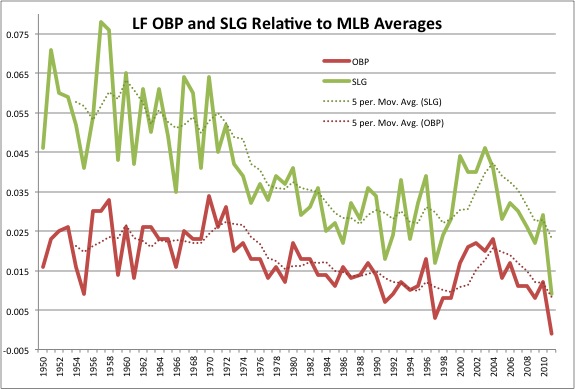 Looking at the decline in terms of home run, walk, strikeout and stolen base rates per plate appearance relative to MLB averages, using an index where 100 is average: 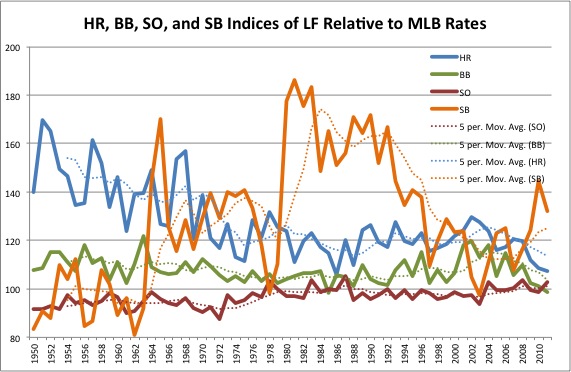 Left fielders aren't homering as much relative to pre-DH days, and they're striking out more and stealing more bases. The big spike in steals largely coincides with the careers of Rickey Henderson and Tim Raines, but in recent years, the rate has begun climbing again thanks in part to Gardner and Pierre. Meanwhile, both the left fielders' home run and walk rates have been trending downward since the departure of Bonds.

So left fielders have been losing ground offensively relative to right fielders, running counter to what we'd expect given the traditional layout of the defensive spectrum. That might make sense if teams were getting the benefit of better defense from the position. Are they? Let's ask Lana Kane: Nope.

The above numbers represent the cumulative (not average) FRAA totals at each position for all 30 teams. Leaving positional adjustments aside, left fielders have been more valuable defensively than right fielders just twice in the past 11 years, and four times in the past 14, a span during which they've had the upper hand offensively only four times. They did post a positive FRAA for the first time since 2005—the Year of Podzilla—but the gain was just 8.1 runs over 2010, about a quarter of a run per team—a drop in the bucket compared to the offensive drain. Since 1993, left fielders have been a combined 40.9 runs below average, while center fielders have been 139.7 runs above average, and right fielders 20.1 runs above average; in annual terms, that's −2.2, 7.4, and 1.1 FRAA across the outfield.

It's possible that some small fragment of the recent drop in scoring—0.23 runs per team per game over the past two seasons, 0.58 over the past five, and 0.86 over the past 11—is attributable to left fielders who can cover more ground defensively if not bop like a traditional left fielder. Then again, it's even more likely that their offensive shortcomings are contributing to that decline in scoring to a much greater extent.

The bottom line is that there appears to be a major inefficiency at work. Whether out of a misguided notion that these slapsters' speed and defensive abilities are making up for their offensive shortcomings, or a league-wide shortage of truly talented hitters, teams aren't getting nearly what they should out of the left field spot. The problem didn't start with Scott Podsednik (who didn’t even play in the majors in 2011) but he's nonetheless emblematic of the lower expectations—and lesser production—that have characterized the position in recent years.

You need to be logged in to comment. Login or Subscribe
joepeta
It's generally assumed that a CF moving to either RF or LF drops 1.0 WAR, all things being equal, due to positional adjustments. Is that still true for the PECOTA WAR projections in 2012 or has a new positional scale been set?
Reply to joepeta
jjaffe
The positional adjustment varies from year to year and is derived from the relative performances at each position after the fact using a rolling average of recent performance. If I'm calculating it correctly, the gap between LF and CF, which was about 6.6 runs circa 2006, is down to about 2.5 runs circa 2011 â€”Â so at least on the offensive side, it's a lot smaller than 1.0 WARP (and it's WARP, not WAR). I suspect that similar rolling averages are incorporated into PECOTA, but you'd have to ask Colin.
Reply to jjaffe
lichtman
Isn't FRAA relative to that position, so shouldn't each position have a cumulative FRAA of zero, be definition?

If not, how do you measure defense NOT relative to a particular position? IOW, how would I know whether LF'ers were better or worse defensively than RF'ers without looking at players who played both positions?

Say we removed all LF'ers in MLB and replaced them with high schoolers who had plastic surgery to look just like the MLB'ers they replaced. How would we know that they were worse fielders than the RF'ers? Explain to me, please, how FRAA would know that they were worse?
Reply to lichtman
cwyers
FRAA is relative to position; I don't know why the cumulative totals aren't zeroing out properly.
Reply to cwyers
jjaffe
My apologies, I should have run the FRAA data by Colin as well before slapping it in there - I thought that the average may have been a historically based one and we could see y-t-y variations. We're working on a way to address this in a follow-up.
Reply to jjaffe