The A’s also have a trio of more or less big-league-ready outfield prospects in Grant Green, Chris Carter, and Michael Taylor. Their top prospect, Michael Choice, will be ready by 2013. He’s an outfielder, too. Basically, Billy Beane’s life looks like this these days:* 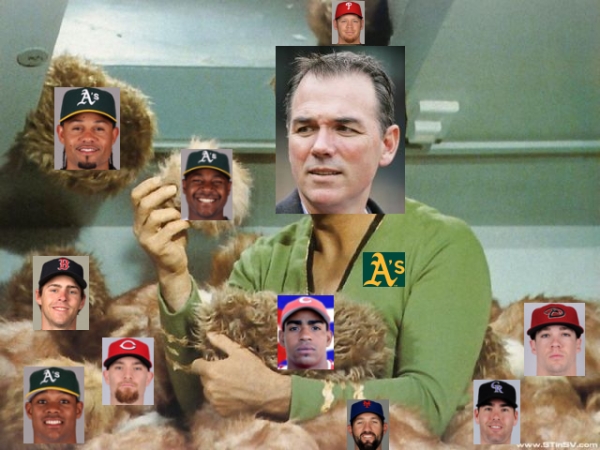 *It took me roughly as long to make this as it did to write the rest of the article. So many outfielders, so few image manipulation skills. (H/T Gene Roddenberry)

Okay, so the situation isn’t quite as crazy as I’m making it sound. The A’s let other teams sign Josh Willingham and David DeJesus this winter, and they also sold Jai Miller to the Orioles and sent Ryan Sweeney to the Red Sox in the Reddick trade.* That cut down on the outfield surplus to some extent, but there are still enough A’s outfielders milling around at the major-league level to fill a few unremarkable rosters. Maybe Beane is hoping that the rest of the league will wake up one day to discover that he's acquired every available fourth or fifth outfielder. Any team that wants a bench will have no choice but to submit to his demands.

*Late last year, the A’s caused quite a stir around the internet by displaying the following depth chart on their official site: 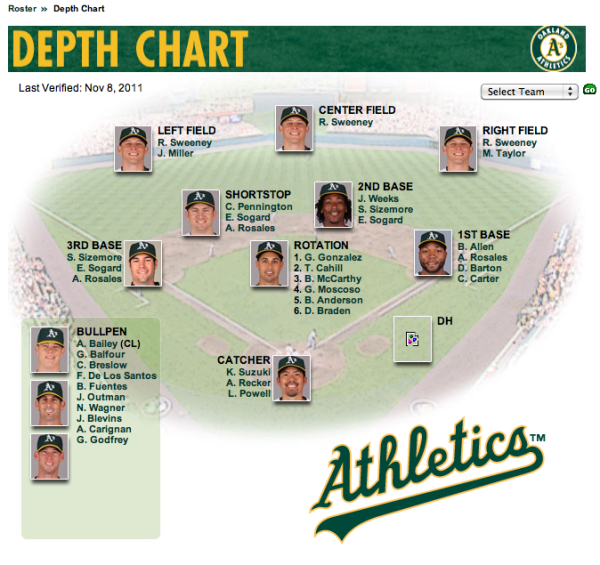 In December, Ryan Sweeney was supposed to play all three outfield spots in Oakland. Now he’s not playing any. Not only that, but the A’s now have a couple of options at DH instead of an “image not found” icon. What a difference an offseason makes.

So what do the A’s want with an expensive outfielder like Cespedes—who’ll be their priciest player in 2012 even though his backloaded deal will pay him only $6.5 million—when they could fill their farm teams down to Double-A with the guys they already have? The simple answer is that none of those other outfielders is Yoenis Cespedes. Most of them are fourth outfielders, if that—the A’s willingness to keep packing the pastures with warm bodies tells us plenty about their opinions of the likes of Taylor and Green. Choice might have Cespedes-like upside with the bat, but he’ll be a corner guy before he reaches the big leagues. Maybe the A’s didn’t expect Cespedes to fall into their price range when they acquired those other spare parts and almost-starting-outfielders. Regardless, you don’t let Cespedes slip out of your grasp because Brandon Moss is already growing on your bench. As Kevin wrote yesterday, “no player in the organization is more likely to be a star” than Cespedes, whose “tools are as impressive as those of anyone in the game.”

Once you start hearing those superlatives, Cespedes’ price tag starts to sound more reasonable. So what if he’s never played in the States? So what if, at age 26, he’s probably already reached his physical prime? If he fulfills that potential and becomes a star, or even gets most of the way there, he’ll be more than worth the money. Sure, $9 million a year is a lot for the A’s. But it’s not all that much out in the wide world of free agent outfielders. It’s Michael Cuddyer money. Actually, it’s less than Cuddyer money—the Rockies will pay Cuddyer $10.5 million per year, only for three seasons instead of four. Considering Cespedes is over six years younger than Cuddyer, that extra year seems like a small price to pay.

That makes this a Moneyball move, even if the kinds of players who used to make for Moneyball moves didn’t have incredible core strength or the ability to leg press the population of a small village. The A’s have been aggressive on the international market, both in landing Michael Ynoa and in almost landing Alexei Ramirez and Aroldis Chapman, and the same motivation applies in their successful pursuit of Cespedes, who has the added bonus of being over 23 and exempt from the new CBA's international spending restrictions. They can’t get established stars at a $9 million AAV, but they can get Cespedes, who might become one. And so they did. And now they’ll wait and hope that Cespedes isn’t a bust, that he won’t look lost if he starts the season in the majors, that he’ll make enough contact to keep his average up, that the culture shock won’t shatter his focus.

But while it may be a Moneyball move, it’s not one solely informed by numbers. That’s because it’s hard to decide exactly what the numbers are saying about Cespedes. Consider how his stats stack up to the rest of the Cuban league, according to the records tirelessly collected by Clay Davenport. Cespedes hit .333/.424/.667 in 354 at-bats last season. That sounds fantastic—until you look at the Cuban league leaders. Cespedes’ 33 homers tied with Jose Abreu's for tops in the league, but judging by both his triple-slash lines and Clay’s adjusted EqA, he wasn’t even close to being Cuba’s best hitter. (Cuba is experiencing an offensive boom that’s sent run-scoring and homer-hitting to unprecedented levels, and Cespedes plays in the island’s most hitter-friendly park.) Abreu was: in 212 at-bats, he hit a ridiculous .453/.597/.986.*

*To look at stats like that, you'd think teams would be elbowing Cespedes aside in their eagerness to get to Abreu, even if he is a first baseman. The only catch is that he hasn't defected yet, which is kind of a big one, as catches go. Still, Abreu is even younger and more accomplished than Cespedes, so he has to be thinking about making a move.

Abreu wasn’t the only one with eye-popping stats. Someone named Frederich Cepeda hit .397/.519/.774, also in over 300 at-bats. Another someone named Michel Enriquez hit .401/.501/.625. Cespedes wasn’t even the most successful hitter on his own team: three others were better. Of course, all of those players were first basemen and corner outfielders, not superb defenders in center*, and they weren’t as young as Yoenis, either. According to Clay, Cespedes’ closest comp among current major leaguers is Adam Jones, another strong 26-year-old center fielder who also struggles to walk and make contact. Jones is a known quantity, of course, but he’ll have no trouble exceeding the package Cespedes received when he hits the market. If Cespedes delivers the four-to-five wins Clay expects of him (we’ll have our own projection ready soon), he’ll be a steal.

*Crisp is no slouch in center himself, but the A's seem to think Cespedes is good enough on defense to shift Crisp to a corner, most likely across the outfield from Reddick.

Any projection for a Cuban player will have some pretty big error bars, even bigger than those surrounding the typical inexperienced professional player, who’s far from a sure thing himself. What that means is that the A’s are putting a lot of stock in scouting where Cespedes is concerned. Yes, scouting. Yes, the A’s. If you went to sleep after reading Moneyball and woke up just in time to see the film adaptation, that might seem strange to you. If you’ve been awake and paying attention all these years, it won’t.

The A’s have told us that they consider stats and scouting to be intertwined so tightly as to be indistinguishable They’ve also told us they like to try selling a few tickets while they rebuild, which explains why they’d be splurging on Cespedes while cutting corners elsewhere on the roster—his presence transforms a yawn-inducing lineup into something worth watching. None of this should come as a shock. (Except for all those outfielders. We can still be at least a little shocked about how many of those they have.) The A’s may have been a surprise team in the Cespedes sweepstakes, but his signing, risky as it is, makes plenty of sense. Now they just need to see about that new stadium. And given the new deals for Cespedes and for Billy Beane, we shouldn’t be surprised if that deal comes through for them, too.

You need to be logged in to comment. Login or Subscribe
NYYanks826
Assuming he breaks camp with the A's, do you think they just plop him right into the cleanup spot from the get-go?
Reply to NYYanks826
ErikFanClubPres
Because of his speed and athleticism I think he makes more sense in the 3 spot.
A top of three of Weeks, Crisp and Cespedes could actually be quite good.
Reply to ErikFanClubPres
jonkk1
Thanks, though, for going to the tribble of making that graphic.
Reply to jonkk1
GoTribe06
And for including the depth chart screen shot!
Reply to GoTribe06
mhmosher
I know a lifelong A's fan and he is very pleasantly surprised and totally stoked about this move. My guess is that was part of the method behind it - give the A's fans some hope for the future.
Reply to mhmosher
gweedoh565
In this sense, it's very similar to the Chapman signing by the Reds. As a loyal Reds fan, I was approaching the 2010 season with a decades-worth of frustration and disillusionment, all of which was shattered when the Reds went out on a limb to get Chapman. When ownership shows they care, fans take notice.
Reply to gweedoh565
jhardman
I despise the Oakland A's. I sure do hope they get a new stadium deal and can stop being the step child of MLB so I can keep on despising 'em.
Reply to jhardman
mdthomp
I highly doubt he's a better CF than Crisp, the dude looks to big to play Center right? Especially in Oakland? Put him in RF, leave Crisp in CF.
Reply to mdthomp
yadenr
Does this mean the A's will be offering more whole roast pig at the concessions?
Reply to yadenr
dwiest12
Calling Grant Green "more or less big league ready" and saying that signing Cespedes "tells us plenty" about the A's opinions of Green is absurd. Grant Green has played a total of 47 games in the outfield for the A's at the AA level after converting from shortstop. 47 games. Why not see what he how he handles AAA before cementing an opinion on him in the outfield.
Reply to dwiest12
greendrummer
jhardman what is there possibly to 'despise' about the a's (unless you're a Giants fan, in which case you would not want them getting a new stadium....)?
Reply to greendrummer
eas9898
Great article. Love the extra effort and the humorous additions.
Reply to eas9898
wrightfan5
So here's the million-dollar question: Who will be in the A's Opening Day OF in 2012, and does it resemble the one we'll see going forward (i.e., 2013 and beyond)?

As far as the former question is concerned, it seems as though Crisp, Smith, and (to a lesser extent) Gomes are all guaranteed roster spots, with young guys like Reddick, Carter, Taylor, et. al. on the periphery. Surely Cespedes will be given a shot coming out of Spring Training to crack the OF rotation, but more likely as a RF because of Crisp's glove. Seem like a fair assessment to you guys, or am I off base?
Reply to wrightfan5
Oleoay
I think the A's paid a grand total of 1 million dollars for most of those outfielders (besides Crisp and Cespedes).
Reply to Oleoay
lloydecole
Well, the thought that is uppermost in my mind is how unfortunate all of this is for Cowgill. He could've been a contender.
Reply to lloydecole
mattcollins
Off-base. Cespedes in CF, Crisp in LF, Reddick in right. Reddick has one of the best outfield arms in baseball, and is arguably a better hitter than Smith (.286 to .281 TAV), who will get to fight Carter for the DH. Gomes has always been there to be the RH platoon for Smith and/or Reddick. The rest of them can duke it out for that last roster spot, and for at bats in Sacramento.