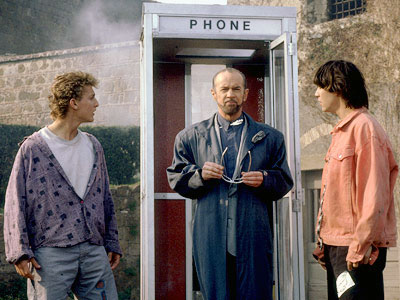 It was a strange time, 1990. "The Simpsons" were on the air, an out-of-touch Massachusetts politician was fighting for relevancy, a man who couldn't spell "potato" was one breath away from the presidency, and Jose Canseco was trying his hardest to look like a idiot to anyone who would pay attention to him.

In this age of M.C. Hammer parachute pants, Axl Rose whistle-solos, and the long, flowing, luxurious… golden… taste-of-heaven locks of Michael Bolton, one man saw a glaring need among the country's baseball fans. It was a pre-internet world. Cell phones were still reserved for the Gordon Gecko's and Zack Morris's of the world, and even cable television was a luxury for most of the nation. If a Reds fan, for example, was living in Seattle and wanted to know how that day's Jose Rijo/Frank Viola match-up was going, he had little choice but to wait until the next day's paper to see the results. If he was lucky, he might have one of those giant, eight-foot satellite dishes out in his yard, but even then he was probably leasing its use to NASA or using it as a fallout shelter rather than watching television with it.

The point is that in 1990 it was impossible for someone to know what exactly was happening in a live game if they weren't living in radio- or television-broadcast range of the game, and the world was a worse-place for it. That June, Beckett Baseball Card Monthly senior editor Pepper Hastings finally had enough of this medieval situation and decided to do something about it. In that month's "Back Page" column, he wrote:

Our Mission: To obtain the number of a pay phone in each of the 26 major league stadiums.

The Ground Rules: The pay phone location *must* have a clear view of the stadium scoreboard. That way, the person answering can relay the current score and situation of the game to the caller.
…
Our Goal: To publish – before the beginning of the pennant races – a complete list of stadium pay phone numbers where up-to-the-second game information can be obtained from on-the-scene game correspondents (a guy on his way back from the snackbar, a conscientious usher, a kid on his way to the souvenir stand).
…
Our Rewards: Instantaneous scores during heated pennant races. Verbal interaction with real fans at stadia across the continent, not pre-recorded 1-900 number yakity-yak…

Pepper Hastings was a genius. After all, how better to find out what is going on in a baseball game than to actually speak with someone at the game? And, unlike the world of today, pay phones were everywhere in 1990. I'm pretty sure the rumor was that Mickey Tettleton's 1989 power binge came from eating his Froot Loops while standing at a phone booth. It only made sense, then, for a national publication to centralize these pay phone numbers and provide them as a service to its readership in the heat of the pennant race.

The responses came pouring in to Hastings, who probably regretted the call to action the first time he had to verify one of the numbers. What do you say when you're calling a phone number that you think is a pay phone at a major league stadium? Will anyone answer, and will it actually be Tiger Stadium (and not, say, downtown Detroit's Tiger Massage Parlor)? And how strange would it be for the person walking around the Yankee Stadium concourse when the phone rings and some guy says "Uh, yeah, is this Yankee Stadium? What's the score?"?

That must have been quite a week at the Beckett offices. Eventually, after verifying the accuracy of every phone number he received, Hastings and Beckett were ready to publish the list in that October's issue. 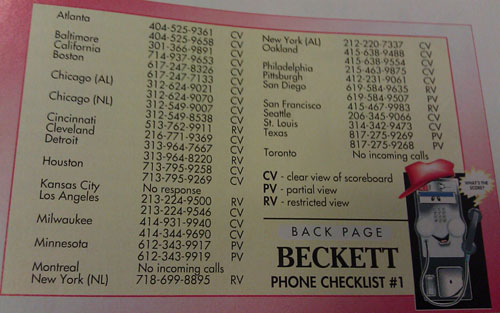 The photo above is the complete list of phone numbers Hastings was able to collect. As you can see, the two Canadian stadiums had "outgoing only" phones. Sadly, the good people of Kansas City did not heed the call. And don't make any "no one was going to Royals games!" jokes – while they weren't all that good in 1990, they did win 92 games in 1989 and had just spent about $10 million on two reigning Cy Young Award winners that winter (no joke there, except for maybe Mark Davis). All I can figure is that Rob Neyer wanted everyone to call him for game updates instead of the stadium, so he kept sending in his own number instead.

Most of these stadiums, and their payphones, are gone today, sad victims in society's push to actually enjoy watching baseball games in person. However, seven are still hosting Major League Baseball games – in Anaheim, Boston, Chicago, Kansas City, Los Angeles, Oakland, and Toronto. KC and Toronto never had working phone numbers to begin with, but what about the other five? Can someone today cast aside the shackles of their iPhone, cable television, a multi-billion dollar telecommunication infrastructure and the internet in general and use these in-stadium payphones as their lone source of live baseball updates? 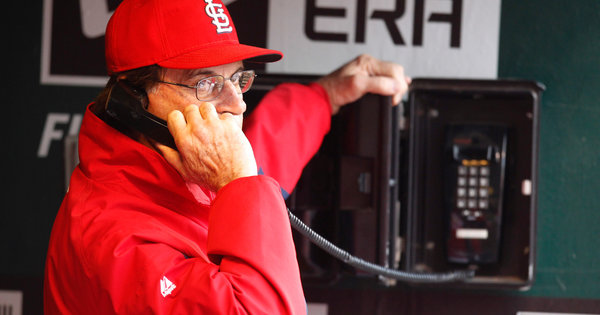 The answer is, sadly, no. I took it upon myself to call the nine numbers listed for these five stadiums and none connect. Some numbers are kind of enough to give you the "We're sorry, but that number has been disconnected" message, but most only give you a busy signal. The busy signals (in Chicago, Los Angeles, and Oakland) give me hope that the payphones still exist in the same spot, but that does us little good if we're hoping to use them as Hastings envisioned it 20+ years ago.

It just isn't a payphone world anymore. Things have changed too much. But that doesn't take anything away from the project Pepper Hastings set out to complete in the summer of 1990. It was a stroke of genius and deserves to be celebrated as much. Now if only I can find and interview the one Riverfront Stadium usher who was forced to answer 30 phone calls a night without explanation on the Reds march to the World Series.

You need to be logged in to comment. Login or Subscribe
kenarneson
The Oakland listing has the area code 415, but Oakland's area code has since changed to 510. Did you dial 415 or 510?
Reply to kenarneson
cywang
Same with Chicago -those numbers should now be 773
Reply to cywang
lgranillo
Thanks. You guys are right, I didn't try the new area codes. I just called the numbers as published in the magazine. The thought of new area codes crossed my mind, but I really didn't think the problem would be so profound.

I'll see about giving the updated numbers a call later. In the meantime, I'd be interested to hear if anyone else tried the new area codes...
Reply to lgranillo
alyellon
Anaheim isn't in the 213 area code any more, either.

Regarding the two numbers listed for Wrigley Field, I believe both of them have been disconnected. As far as I know, Wrigley Field no longer has any pay phones.
Reply to alyellon
alyellon
Actually, I see Anaheim listed in 714 -- but is that right, either?

And is Dodger Stadium still in 213?
Reply to alyellon
AvengingJM
Cool stuff.

I'm almost tempted to start reading my old Becketts.
Reply to AvengingJM
jhardman
This is how we did high school football on radio in the late 1970's. I was the representative at my suburban Dallas area school, and I would dial in to a live radio show with an update each quarter and a full update at the end of the game, which would be broadcast live over the air on KRLD radio in Dallas.

I've found it quite fun to see this format adapted to virtually every sport, and I love that ESPN radio uses it on game day for NFL football to this day. I remember when this idea was discussed for baseball, and also remember that a huge hurdle was getting the local team to give access for this "fan" to call in with periodic updates.
Reply to jhardman
Timcarvin
This is excellent. I've loved Larry's stuff on the site.
Reply to Timcarvin
mhmosher
Cool article.
Reply to mhmosher