In last week’s Painting the Black, I introduced a table that showed the top five two-strike hitters since 2007, as judged by True Average. Said table included Albert Pujols, Miguel Cabrera, and a trio of Red Sox teammates. An observant reader emailed me, asking if I thought the Boston bunch was a coincidence or a sign of something more. Because prodding Ben Cherington for an answer could lead to a placating lie or a restraining order, deductive reasoning is the best route to take in identifying if the Red Sox chase good two-strike hitters.

Featuring three of the top five two-strike hitters in the league is a good way to catapult up the team rankings, and sure enough, the Red Sox are in a tie for the top spot with the Yankees. There is no northeast modifier in the True Average formula, but that New York and Boston are the top two teams is an unsurprising outcome, and pretending otherwise is ignoring the realities of the game. But more on that in a moment. First, here are the top five teams in two-strike hitting, as well as the two-strike hitting player equivalent:

For comparison’s sake, here are the bottom five teams, also paired with a player equivalent:

The gap between the Red Sox and Yankees is sizable, and it only grows wider the deeper one digs into the data. For instance, a combined 15.8 percent (8.5 percent Yankees, 7.3 percent Red Sox) of the top 25 percent of two-strike batters were primarily from one of those two teams. The next best represented team finished at less than five percent. Boston appears to be more top-heavy, while the Yankees are distributed throughout, as 15.2 percent of the league’s top 10 percent of two-strike hitters belonged to Boston; New York finished tied for second at 9.1 percent.

We’ve now arrived at the same conclusion twice without answering just how the Red Sox, and the Yankees to a lesser extent, got there. In this post-Moneyball (or more recently, Extra 2%) world, market inefficiency has become a banal buzzword. Not every trend is due to the market over or undervaluing an aspect of a player’s game. Sometimes, the real explanation is much simpler, meaning all that's been written has been to set up this: there doesn’t appear to be a special class of hitter who only prevail in two-strike situations over a five-year sample. Have a look for yourself: 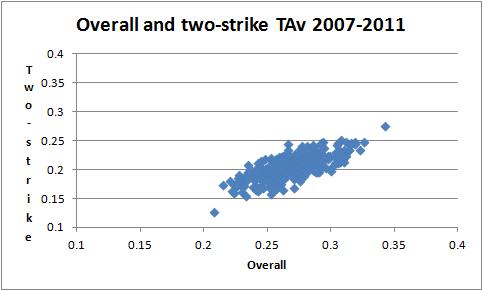 In anticlimactic fashion, it appears that good hitters are going to hit regardless of the situation. The data isn’t perfectly symmetrical, but it is a nice touch that Pujols (the good outlier) is easily spotted as the leader on both axes, while Jeff Mathis (the bad outlier) is easily spotted as the laggard on both axes. Turning back to the Boston and New York situations and applying Occam’s razor: it isn’t that those teams look for good two-strike hitters but rather that they look for good hitters, and those good hitters can work deep into counts and live to tell about it.

Of course, that is not to suggest all hitters conform to their overall True Average in two-strike situations. There does appear to be truth to the idea that contact-heavy hitters will perform more like their overall numbers and that strikeout-prone hitters are more likely to have more extreme differentials. See here for the smallest differentials:

And here are the largest:

Aaron Hill is being overzealous when he says that Scutaro “[has] a great eye at the plate,” and “[always gets] to two strikes, but [battles] it out and [finds] a walk somehow.” But Hill isn’t far off. By avoiding strikeouts and putting the ball into play, Scutaro is raising his likelihood of a positive development. Even if the chances of success are reduced on a poorly struck groundball (say five-to-ten percent, just to make up a number), that is higher than the chances of success that stem from taking that same pitch for a strike-three call. The inverse is that Scutaro is less likely to hit for power, and that leaves him with a lower overall True Average than a few of those batters with huge splits. This is not a new concept or tradeoff, just one reinforced all the time that applies here.

Without knowing for sure, it appears that Boston is not honing in on an overlooked skill or practicing a secret science to get good two-strike hitters; they just look for good hitters. Over a large enough sample, those two circles tend to overlap more often than not.

My thinking is that with a full count, the hitter and pitcher have been truly battling and we might expect a different TAv than we would see in a different at bat wherein the pitcher had the decided upper hand and put the hitter on the ropes.
Reply to rawagman
belewfripp
Thanks for the nice article, R.J. One question, though - isn't saying that hitters with a tendency to strikeout are more likely to have a low, two-strike TAV kind of like saying that players that walk a lot tend to take more pitches on 3-ball counts? In other words, pretty obvious, and not necessarily a flaw in the correlation between 2-strike TAV and TAV in general?
Reply to belewfripp
Oleoay
I'm kind of wondering why TAv is used instead of OBP.. shouldn't the issue be whether a player gets on base and not whether they necessarily hit for power with two strikes?
Reply to Oleoay