Over the last several years, players have been placed on the disabled list in record numbers. This isn’t just due to an increasing number of injuries; at one time, only a limited number of players could be placed on the DL. If another player was injured and a team was at its limit, it was just too bad; the club had to make do. Now, teams can place an unlimited number of players on the DL, but teams might be abusing the privilege.

"Disabled" or "injury" lists go all the way back to the early 1900s. Rosters held only 21 players, and several managers and National League clubs were upset at how the strict limit punished those unhealthy or unfortunate—something, perhaps, that should not be ignored today.* In response, the National League created the first official disabled list on July 12, 1915; it allowed players to be removed from the roster for a ten-day recuperation period.  Even though they were not allowed to play, injured players could remain with the team as a “coacher.”

At that time, the team president had to inform the league president within 48 hours of the injury. Now, you can place a player on the DL retroactively up to 10 days after he last played. This disabled list only lasted until the start of the 1917 season, and there are very few accounts of players being placed on it. After searching through newspaper archives (such as the New York Times), we were able to find that New York Giants shortstop Art Fletcher injured his wrist, and Duster Mails of the Brooklyn Dodgers tore a muscle, and both were placed on the disabled list in 1916.

Between 1917 and 1941, injured players were sent home to recuperate and then expected to report back when healthy. Teams could also place injured players on Suspended or Voluntary Retired lists; owners loved this because it meant that players were taken off the roster and didn’t get a salary, nor were they allowed to sign with any other team. It took until 1941 for a disabled list similar to the one we have now to be instituted. Initially, only two players could be on the disabled list at the same time, and they had to spend at least 60 days on it. Teams were also restricted because they could not place anyone on the disabled list after August 1.

In 1950, the amount of time players had to spend on the DL was reduced to 30 days, which meant that the list was used more often. The length of a trip to the DL has constantly evolved; there have been 10-, 15-, 21-, 30-, and 60-day versions. To make the varied lengths of disabled lists even more confusing, the 30-day and 60-day versions were sometimes called the emergency lists because of the severity of the injuries. Prior to August 1990, teams were only allowed to have two players, including only one pitcher, on the 15-day disabled list, three on the 21-day DL, and one on the 30-day DL.** 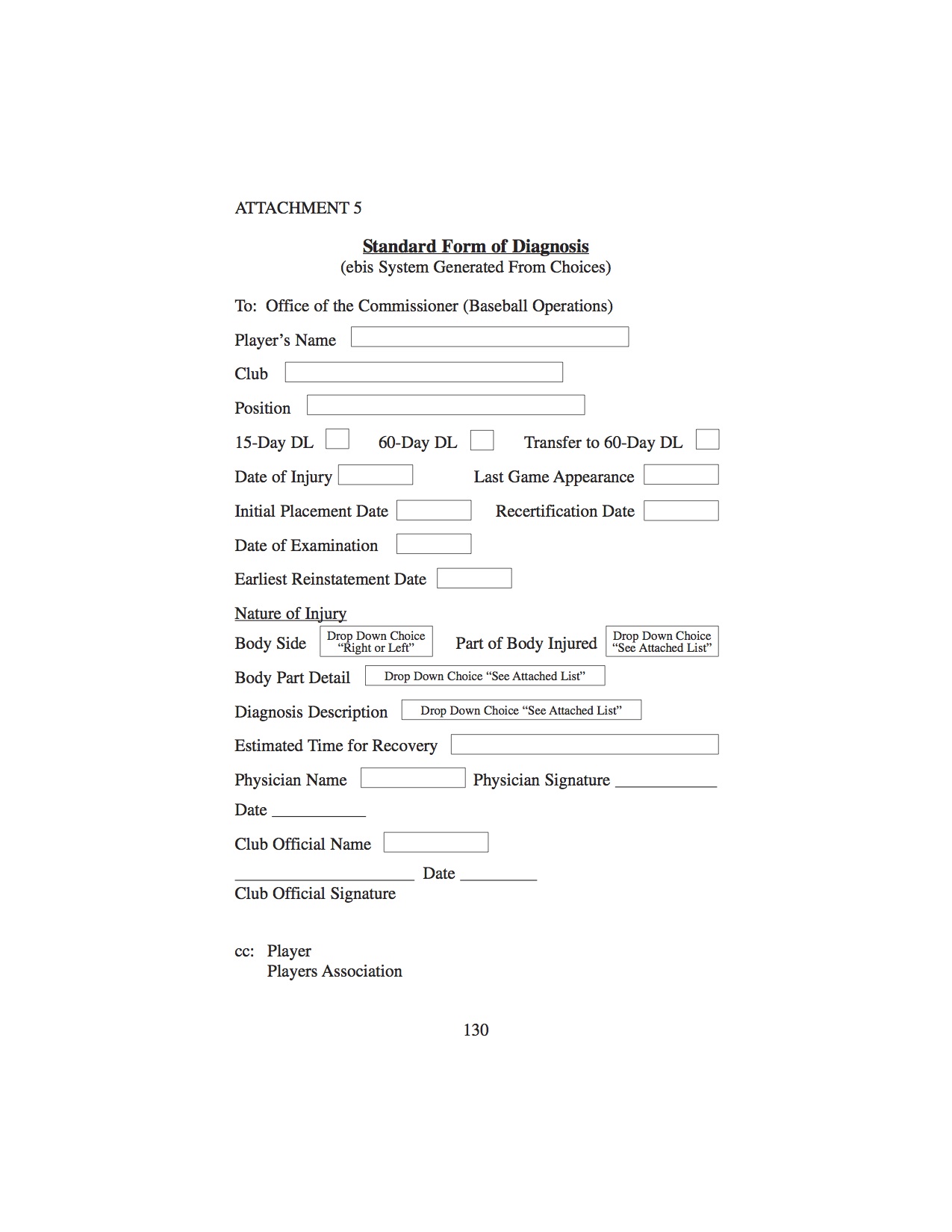 A seven-day disabled list created in 2011 was specifically designed and implemented for concussions, and it was used 12 times in its inaugural season. The uniqueness of this particular disabled list is that only concussion cases are allowed to be placed on it, and the player is automatically transferred to the 15-day disabled list if more than 15 days pass. To make the move is official, each team must designate a specialist in mild brain trauma to evaluate the player before sending a report to MLB’s medical director for approval.

The present setup of 7-, 15- and 60-day disabled lists is unlikely to change. Studies of MLB players unequivocally state that injuries are up significantly from the 1960s, `70s, and `80s ,but how restrictive the disabled list was up until 1990 is rarely mentioned. Injuries are increasing, but there is no way to completely separate the almost 200 percent increase in injury rate from the liberalization of the disabled list rules. This season will again likely see a similar record or near record number of disabled list moves, and it will kill a record number of electronic trees as we cover them.

You need to be logged in to comment. Login or Subscribe
edman8585
Great article. I consider myself somewhat of an expert on roster rules, but my age kept me from knowing about the DL limits prior to 1990. It sort of puts to shame all of those already weak arguments about how more pitchers are getting hurt because they are spending more time on the disabled list.
Reply to edman8585
cidawkins
Well there are certainly more injuries that ended with lost time, that cannot be disputed. It's just that a lot more detailed research needs to be done to really capture the historical number of injuries (pre-1990)instead of just looking at DL data. I have a feeling in today's DL setting, a lot of those injuries would have ended up on the disabled list.
Reply to cidawkins
ScottBehson
I don't think the Mets could have fielded a team in the past 4 years if they could only have 2 DL slots.
Reply to ScottBehson
cidawkins
They sure would have had a hard time
Reply to cidawkins
bravejason
I think a good article topic would be to discuss in depth the rules associated with the various disabled list. Of particular interest is how a player transistions from one to the other and how that relates to roster management.
Reply to bravejason
Asinwreck
Excellent discussion of the changing rules, and thanks for providing a sample of the current paperwork used.
Reply to Asinwreck