The 2012 Topps Baseball Card set hits the store shelves on Wednesday. Earlier this week, an image of one of the set's most creative cards was released to the public: 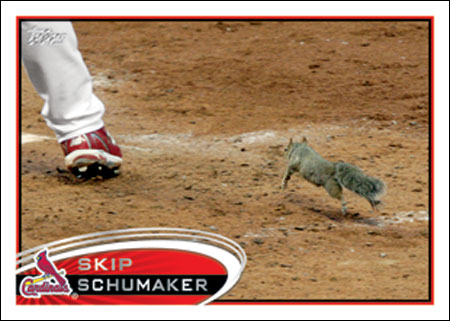 If this doesn't look familiar to you, that's an image of the infamous "Rally Squirrel" on Skip Schumaker's card in place of the usual photo of Schumaker diving at an infield single. Topps claims that this card is the first card in it's history not to include a head/face photo of the player (that *is* Schumaker's foot on the left there). As far as creativity goes, this card's a winner – even if the Rally Squirrel thing got old after about two minutes.

As the set gets ready to be sold to consumers for the first time, however, I find myself in possession of a few other "special" cards included in the 2012 Topps set that the company hasn't yet told anyone about. As you might have guessed, the Schumaker/Rally Squirrel pairing isn't the only player/animal grouping the card giant saw fit to include.

Here, for the first time, are the remaining 2012 Topps Baseball Cards "animal" cards: 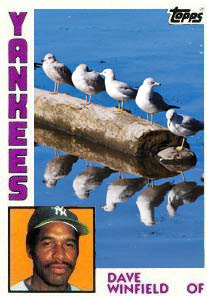 â€‹Dave Winfield, 1984 Topps "replacement" – In commemoration of Dave Winfield's 1983 "seagull incident" in Toronto. Missing from the photo: a police car. 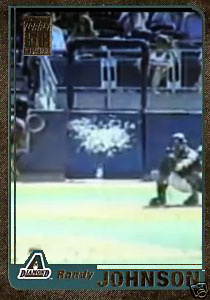 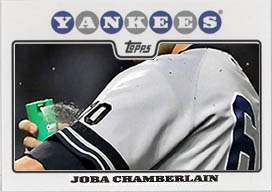 Joba Chamberlain, 2008 Topps "replacement" – Close-ups of the midges proved to be too gruesome for insectophobiacs – and Yankees fans. 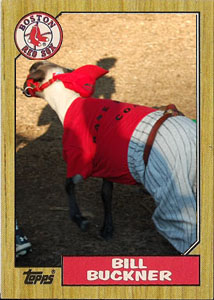 Bill Buckner, 1987 Topps "replacement" – Topps tells me that Red Sox clamored for this card for nearly 20 years before the 2004 season.

You need to be logged in to comment. Login or Subscribe
BillJohnson
LOL, that was hilarious ... I will say, however, that far from having "got old after about two minutes," the Rally Squirrel has become part of Cardinals folklore, and this for a franchise sufficiently rich in folklore as to have a rather high bar. The Rally Squirrel features on T-shirts that still sell on mlb.com, apparently fairly well.

Actually, my favorite part of the way the Rally Squirrel played out was the shot of Angel Hernandez trying to calm down Roy Oswalt, a big grin on Angel's face (although it was almost obscured by his equally big nose). Then, when Oz walked back to the mound with a little grin of his own, and a "Wow" that any lip reader could clearly distinguish, his status as one of my favorite players was sealed. Well done, sir!
Reply to BillJohnson
Oleoay
Cardinals fans get the Rally Squirrel.

Cubs fans get the Curse of the Billy Goat.

Life ain't fair for me :(
Reply to Oleoay
eighteen
Well done. Still laughin' at the Buckner card.
Reply to eighteen