I'm always in awe of the digital age we live in. Everything is on demand and at your fingertips. Music, movies, television, video games – they can all be enjoyed anywhere you are almost instantly. Books are the same way, with all the various e-book readers on the market now. In fact, instantly downloadable electronic books are so prevalent that each and every one of us can even read books about baseball written by turn-of-the-century Hall of Famers with just a few clicks of a mouse button.

Currently, there are at least five different baseball books available free on Google Books written by early-20th century baseball stars, including legendary Hall of Famers John McGraw and Christy Mathewson. These books are also available in other ebook stores, but the prices and availability differ.

Here's a brief look at the five books on Google Books so far. Full disclosure: I have not read through all of these books, so my impressions may be incomplete or inaccurate. Feel free to download them yourself (for free!) and let me know where I'm wrong. 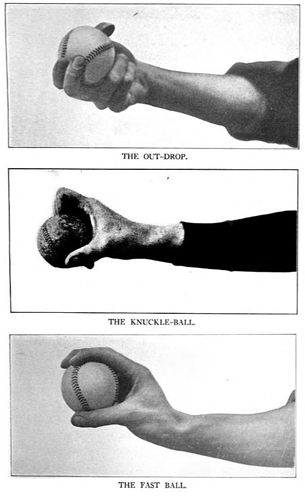 Clarke played for thirteen years in the National League beginning in 1893 for five teams, including the Baltimore Orioles and Boston Beaneaters. After retiring, "Boileryard" Clarke took up the head coaching job at Princeton University. Over the next 36 years, Clarke compiled a 564-322-10 record for the Tigers. In 1965, Princeton opened Clarke Field, where the Princeton Tigers still play today.

"Baseball" covers the fine details for how to play the game. In the introduction, Clarke and Dawson put forth that, while the sport is widely followed, "few players, and fewer spectators, really understand it thoroughly" because "leaders of the game" have "reserved this knowledge for those immediately under their control, while the average player and spectator must be content to play and watch the game as best he can." Chapters cover each position (with the outfield lumped together) as well as batting, base-running, and "team plays". There are even chapters called "Hints to College Players" (number one: have regular hours for study) and "Hints to Spectators".

The best part of the book, though, are the photos illustrating proper technique, from how to catch a low ball from the pitcher to how to handle a throw at first-base (while wearing a dapper college sweater!) to how to slide. There is also a collection of diagrams at the back of the book, describing how players on the field should react to different situations. They look like they belong in Phil Jackson's or Bill Belichick's office more than Tony LaRussa's or Joe Torre's. 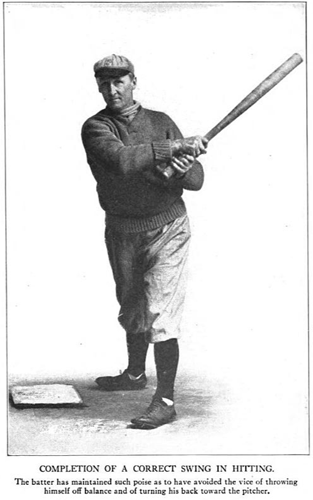 How to Play Baseball: A Manual for Boys
by John Joseph McGraw

Who knew the gristled Hall of Fame manager was such a literary figure?! Although both books seem to be structured and geared towards the same audience, the more thorough of these two books is very obviously "How to Play Baseball". The sections are longer and seem to take on a more "coach-y" tone. McGraw constantly gives the "boys" he's writing for hints on how best to practice a position and who among their friends should claim each spot. There are even more photos in this book than Clarke's "Baseball", making it a great resource for checking out turn-of-the-century baseball. For example, there's an extended section early in the book where McGraw describes the perfect wind-up:

The most effective form of delivery is overhand, and I would advise all pitchers to aim to acquire this style for many reasons. … The regulation overhand swing starts with the ball and both hands held against the chest, and then the right or left arm, according to whether the man is a southpaw or a right handed pitcher, is swung in a short circle, with the muscles of the arm and body relaxed. Finally, the pitching hand is brought back over the head and joins the other when the twirler swings back on his right foot if he is a right hander, or the left for a southpaw. …

"Scientific Baseball" reads like a condensed version of "How to Play Baseball", though that's not strictly true. The sections aren't exactly the same, including, for example, a two page section on how to throw a spitball. This book is also a fun thing to flip through thanks to the included 1913 Major League Baseball schedule, the statistics at the back of the book, and the detailed rules of the game included near the back.

Pitching In a Pinch: or, Baseball from the Inside
by Christy Mathewson

A more conversational book from one of the greatest pitchers of all-time. Mathewson describes the different facets of the game from his point of view on the mound, giving many in-game examples of how things played out in real life.

Very often spectators think that a pitcher has lost his grip in a pinch, when really he is playing inside baseball. A game with Chicago in Chicago back in 1908 (not the famous contest that cost the Giants a championship; I did not have any grip at all that day; but one earlier in the season) best illustrates the point I want to bring out. Mordecai Brown and I were having a pitchers' duel, and the Giants were in the lead by the score of 1 to 0 when the team took the field for the ninth inning.

It was one of those fragile games in which one run makes a lot of difference, the sort that has a fringe of nervous prostration for the spectators. …

Perhaps the best sense of Mathewson's writing comes from the table of contents. "Pitching In a Pinch" includes chapters, among others, called "The Most Dangerous Batters I have Met", "Big League Pitchers and their Peculiarities", "Coaching – Good and Bad", "Honest and Dishonest Sign Stealing", "Jinxes and what they Mean to a Ball-Player" and "The Game that Cost a Pennant". If I were to read any single one of these books, I think it'd be this one.

The complete sub-title of this book is "The History of the National Game; Its Development Into an Exact Mathematical Sport; Records of Great Plays and Players; Anecdotes and Incidents of Decisive Struggles on the Diamond; Signs and Systems Used by Championship Teams." That's quite a mouthful from the man most famous for his part in a poem.

The structure of this book isn't much different than any of the others above, focusing on the various positions on the diamond and the best way to put together a winning team. The main difference lies in the fact that most of the book was written by Fullerton, a "reporter who has followed the fortunes of winning and losing teams for twenty years". The text has a more elevated or educated feel to it.

As a prime example, "Touching Second" is the only book listed here with a chapter called "Baseball Law". In it, Fullerton goes into some detail about how the "law" of baseball works:

Understand in the first place that baseball "law" is illegal, contrary to civil law, in direct violation of the Federal laws regulating combines and the blacklist, and in principle, directly in defiance of the Constitution and of the Rights of Man. Yet, because of the nature of the peculiar business, the greater part of baseball law is necessary.
…
The necessity of the reserve clause among baseball players is great; the combination between owners is much closer than in any other business in America and perfectly effective. In baseball a reserve clause enables club owners to hold together a team, prevents competitive bidding for the services of extraordinary players, enables owners to enforce, in many leagues, a strict salary limit. Without the reserve clause it is doubtful if any twenty players could be held together long enough to create a strong, coherent team, with perfect team work. Without the reserve, and the illegal agreements between owners, some players would receive high salaries for a few years, possibly bankrupt some clubs without much improving their playing strength, destroy the power of owners and managers to discipline players, and, for a time at least, weak clubs would be weakened and strong ones strengthened.

The question is whether contracts for a term of years would accomplish the same ends. Undoubtedly a sudden change of the system of government would be followed by a period of destructive bidding, but many think that within a short time the salary and contract questions would adjust themselves, the scale of wages being what the business would justify, and the players be certain of greater justice.

I've done some searching on other ebook sites for similar books in the out-of-copyright age, but I haven't found anything else. If anyone happens to know of others, I'd love to hear about them.

You need to be logged in to comment. Login or Subscribe
redsoxin2004
I started collecting both fiction and non-fiction books about 10 years ago. I have 100+ and the Mathewson book is one of my favorites.
Reply to redsoxin2004
jpomrenke
Good stuff, Larry.

FYI, there are a bunch of old baseball books for free download at OpenLibrary.org. Scroll down to the fourth item here ("Holiday reading: Get your free e-books") and I pulled out a few interesting titles:

http://sabr.org/latest/week-sabr-december-21-2011
Reply to jpomrenke
Drungo
I've been fascinated by the 1890s Orioles since I was a kid, and the thought that I can go home tonight and download a book by Boileryard Clarke on my Kindle is amazing.
Reply to Drungo