Everyone experiences back or neck pain at some point in their lives, and baseball players are no different. We’ve seen Justin Morneau, Chris Snyder, Tim Hudson, Jason Isringhausen, Peter Moylan, and many others suffer disc injuries in the last few years alone. We have over 120 cases of injured intervertebral discs among major leaguers in our database, a number that’s sure to grow as we add more historical cases and additional aches and pains arise. As Corey tries to ignore his own sore back, let’s take a look at intervertebral disc injuries.

Roughly half an inch thick, intervertebral discs are made up of three different structures. The annulus fibrosis is the outer peripheral portion of the disc and is composed of fibrocartilage along with type I collagen, which is essential to the overall strength of the disc. Tiny fibers in this layer attach to the bones and cartilage end plates in order to keep them in place.

The second major component of the disc is the nucleus pulposus, which has a much higher water content than the annulus fibrosis. Type II collagen fibers and a gel also are present throughout this inner part of intervertebral discs and are vital to resisting compressive loads. The water content of the nucleus pulposus naturally decreases after age 30-40, and by the time a person has reached their 60s or 70s, this once-squishy material has become stiffer and turned into fibrocartilage.

The third component of the discs is what is termed the cartilaginous end plate. Less than a millimeter thick, this piece of cartilage is strongly interwoven with the annulus fibrosis and is located on the top and bottom of each disc. The makeup of the cartilage end plate is not too dissimilar to the disc itself, in that it is composed of the same basic materials and the middle portion of the end plate has a higher water content than the periphery.

The discs in the cervical and low back are thicker in the front than in the back and are part of the reason why the discs tend to become injured posteriorly. 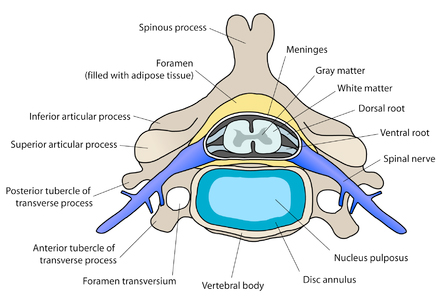 Injury Description
Injury to the discs can occur acutely in incidents such as car accidents or falls, or chronically over time through repetitive activities. Common causes include improper lifting techniques, poor posture, extended periods of vibration (in jackhammer operators and truck drivers), car accidents, or repetitive loading of the discs. Disc injuries are classified depending on the severity and location.

Some bulging discs can be considered part of the aging process, as seen in figure (b) below. In these cases, the disc extends outside the area it normally should. The bulge typically involves a large portion of the disc. Bulging discs are extremely common to see on MRIs of people who are highly athletic or were athletic previously, and often these are not symptomatic.

Herniated discs are a different animal. Tears in the outer annulus fibrosis allow some of the inner nucleus pulposus to protrude out of the back. There are a few different subtypes of herniated discs, and all of them usually cause pain. Localized bulges called disc protrusions (Figure C) often occur posterolaterally, toward the area where the nerves exit the spinal cord. About a third of the population has protruding discs that are not symptomatic and may not even know about it. All of the gel-like nucleosis pulposus is still contained within the outermost ring of the disc.

In disc prolapses or extrusions (Figure D), the inner material has broken through the annular ring but is still usually contained by the posterior longitudinal ligament. Pressure on the nerve roots almost always occurs and can cause significant pain, called sciatica. Sciatica can be pain, weakness, tingling, or numbness in the buttock or leg. Disc extrusions often end in surgery because of the pain on the nerves.

In Figure E, we see a disc sequester, or free fragment in which the herniated material is pinched and broken off from the disc itself. This piece floats in the epidural space and often ends up putting pressure on any number of structures. This could result in a medical emergency if the patient starts to become incontinent, as seen in Cauda Equina Syndrome. 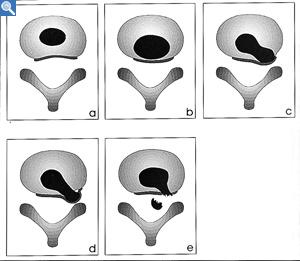 Disc injuries are assessed through a variety of measures. Of course, the clinical symptoms are assessed first to see where the pain is located, whether it radiates down the leg, whether flexion or extension of the back/neck cause pain, etc. Special tests are performed in the clinic, including the straight leg raise, which also aids in pinpointing the cause of the pain. X-rays are obtained to help evaluate for degenerative disc disease, a slow dehydration that results in narrowing between the bones and causes the disks to become less flexible and lose their ability to act as shock absorbers. If there is suspicion of a disc injury, MRIs are ordered. Depending on those results, more specialized diagnostic tests may be ordered, including a CT with dye injected into the spinal canal or an EMG.

Several studies have shown that the larger herniations can shrink in size without a reduction in symptoms. Because of this phenomenon, surgeons use the clinical symptoms as a guide toward surgery rather than what is shown on the MRI results.

Treatment
Surgery is not always necessary, even if physical therapy fails. Epidural injections are most effective in patients whose leg pain is worse than their back pain. In this procedure, strong anti-inflammatory medication is injected just outside the sheath surrounding the spinal cord, called the dura. The injections are often performed in a series of three or more, spread out over several weeks. The needle is guided in with specialized x-rays, and the medication takes full effect in 24 to 72 hours. For a more detailed description, check out our previous report.

Epidural injections can be very beneficial, but sometimes the doctor wants to reach a specific nerve root. In this case, the patient is placed on the stomach beneath a special x-ray machine. Using that fluoroscope, the needle is guided into the foraminal opening for that specific nerve root. A solution similar to the epidurals is injected into that area.

Surgery
The most common surgical technique to address herniated discs is a procedure called the microdiscectomy. Under general anesthesia, the patient is positioned on the stomach. A small incision a few centimeters long is made over the level of the herniated disc. A special microscope is used to give the surgeon better visualization with minimal cutting of the overlying muscles and soft tissues. The correct disc is identified before the surgeon moves forward.

Some bone from the vertebra is usually removed to give the surgeon better access to the herniated disc. The actual nerves are carefully protected and shifted so the herniated portion of the disc can be safely removed. Small instruments with grasping and cutting ends are used to remove the offending disc material. The area is also checked for disc fragments that may have come free without showing up on the MRIs.

This procedure is summarized in these three figures from Espine.com. 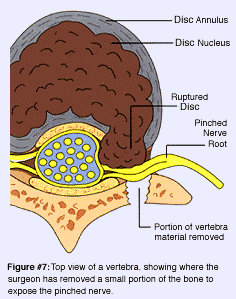 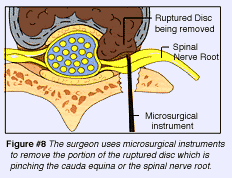 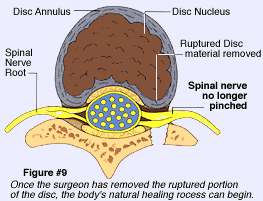 The success rate for microdiscectomy surgery is very high—over 90 percent. Unfortunately, recovery takes several months. Some athletes have reportedly returned in as little six weeks, but according to our database, most players take at least three months to recover.

Summary
Microdiscectomy is a very successful and increasingly popular procedure. Herniated discs do not seem to strike position players or pitchers more often, which makes it that much harder to figure out how to prevent them. Regardless of position, players often take several months to recover from the surgery, but the long-term prognosis is very good.