Back in January 2002, the Dodgers bid more than $11 million for the negotiating rights to left-hander Kaz Ishii. Los Angeles won the bidding, then closed the deal with Ishii by inking him to a four-year contract worth $12.3 million. Much to the delight of everyone, Ishii’s contract included a number of benefits—from ground transportation, to eight round-trip business class tickets from Japan to Los Angeles, to a $25,000 housing allowance per year. The Dodgers spared no expense in securing the best strikeout pitcher in Japan.

The early days of spring training feature unrivaled amounts of unchecked optimism. Baseball is back, new hats and gloves are on, and profiling the new players is a given for the team’s reporters. Sometimes, those profiles can capture that aureate optimism that turns into comedy over time, like this quote, as transcribed by Mike DiGiovanna:

"My first thought as I watched [Ishii] was, 'Now that's a mature delivery,'" pitching coach Jim Colborn said. "You can tell he's done it lots and lots of times. It's like an art critic looking at a painting and saying, 'There's a great painting.'"

Thirty-seven months later, a reporter asked Colborn what pitches Ishii had the most trouble throwing. He responded, “Strikes."

Colborn did not sour on Ishii right away. Through Ishii’s first two major league starts, he completed 11 2/3 innings, allowed four hits, walked six batters, and struck out 15. April would be a good month for Ishii. May would be too. But from June until early September—when Ishii was struck in the head by a batted ball, ending his season—his earned run average ballooned from 2.90 to 4.27, and his OPS against increased from 637 to 744 thanks in part to three straight rotten months:

DiGiovanna wrote at the time:

A fan might look at Ishii, 28, and think: There's a funky delivery. After stepping back off the rubber to start his windup, Ishii brings his hands together at his belt and hesitates for about two seconds. Then he brings his hands over his head and continues his delivery.

It's the kind of deceptive wrinkle that many Japanese pitchers, including Hideo Nomo, Shigetoshi Hasegawa, and Kazuhiro Sasaki, use in their deliveries. Considering the success Japanese pitchers have had in the big leagues, will more young pitchers in the U.S. try to emulate them?

Ishii may not have featured the same arms-over-the-head hesitation move that Hideo Nomo popularized, but nevertheless, his decaying results and deceptive delivery made folks skeptical of his success. Deceiving a batter with a well-placed fastball or well-timed off-speed pitch is encouraged; outfoxing a hitter because of a hesitation move or body twitch pre-pitch is less acceptable and seen as less sustainable.

Can trick-delivery pitchers survive in the majors? Doing so requires keeping the deception factor high, despite facing the best hitters in the world multiple times over the course of a season. This is not just a Japanese-born pitcher thing, either. Last October, Jack Moore discovered that Arizona’s Josh Collmenter saw his home run rate increase in each subsequent start versus an opponent. Still, the question seems more fitting to ask of foreign products. Most batters have never faced them in a game, whereas Collmenter pitched in the minors over a five-year span, affording some of his opponents an opportunity to familiarize themselves with his quirks.

No team appears to be importing Asian-based pitchers at the volume established by the Orioles this winter. With at least four arms signed this winter—including three lefties from Nippon Professional Baseball (Wei-Yin Chen, Tsuyoshi Wada, and Yoshihiro Doi) and a right-hander from Korea (Eun Chul Choi)—the Orioles’ strategy is worth examining. Whether it becomes a strategy worth replicating or avoiding will hinge on the results.

It makes sense to wonder then, if the results are vital, whether these imported pitchers may hold a competitive advantage early in the season and then whether those results fade as the batters become acclimated to their deliveries and repertoires. Resident query master Andrew Chong took the 12 Japanese-born starting pitchers since 1990 and ran a complex command to see whether those pitchers suffered from diminishing returns in subsequent matchups after the virginal battle. The results, shown below, only include batters who faced the pitchers at least five times over the pitcher’s first three seasons.

For those who prefer a graphical look: 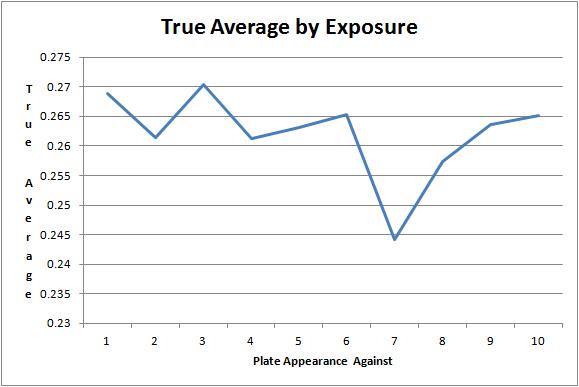 If the deception factor dies a quick death, one could not tell from the data. In fact, there is no apparent trend—intuitive or otherwise—that jumps out from this data set. Even on an individual basis, it proves difficult to find a pitcher who batters hit at ascending rates over time. The closest might be Daisuke Matsuzaka, who once caused Tom Verducci to equate his delivery to a haiku:

Matsuzaka's pitching motion is an elegant haiku, beauty captured in three parts separated by two pauses that he varies from pitch to pitch. He swings his hands over his head, pauses, lowers his hands as he begins his turn on the rubber, pauses again, then unleashes all the stored energy in a violently quick motion to the plate in which he drops so low that his right knee sometimes scrapes the dirt of the mound. It's like nothing taught in America.

In their first plate appearances against Matsuzaka, batters posted a .217 True Average. That rate increased to .260 in their second and .339 in their third viewings of Dice-K, thus resembling the expected gradual increase. But it all falls apart from there. Batters had a .246 True Average in their fourth trip to the plate, .265 in the fifth, .240 in the sixth, and .183 in the seventh. Granted, this does not control for whether the pitcher tossed from the windup or out of the stretch, but it’s still illuminating.

Deception is a big part of pitching, and suggesting otherwise is being dishonest. Whether international products can deceive hitters for longer or at a better rate than their domestic peers is a question unanswerable by the granular data presented here (although the numbers suggest there is no real trend either way, albeit in a small sample size).

Ishii returned to Japan after the 2005 season with fewer than two career Wins Above Replacement Player. The perception is that the league caught onto his deceptive ways as the video, first-hand impressions, and scouting reports piled up. Hitters adjusted to Ishii because that is what hitters do. Yet, Ishii’s run average and average Game Score during his rookie season increased in the second and third meetings against teams that season, thus countering the idea that his success was a figment of premiering trickery and nothing more. Perception and reality can make for a good couple at times; other times, however, they aren’t to be seen in the same place.

You need to be logged in to comment. Login or Subscribe
beeker99
RJ, thanks for a very interesting article. It made me think of another international "import" who had some deception to his game but wasn't from Japan - El Duque Orlando Hernandez. His stuff was of course outstanding, but also relied on some deception - the high leg kick, hands in the glove, variety of arm angles and pitches he used, etc.

I'm curious what happens if you look at the data for El Duque's starts - would you see a trend similar to the graph above, or would it be all over the place like Matsuzaka's?
Reply to beeker99