It’s 5:53 a.m. I have three hours, and one factoid for inspiration: Carlos Quentin has been hit in 4.0 percent of his plate appearances. Yuniesky Betancourt has walked in 3.3 percent of his. Let’s just see where this takes us.

“Stanford's Carlos Quentin was hit by five pitches to set an NCAA Division-I record in the Cardinal's 15-11 victory over Florida State on Saturday.

“Quentin, a sophomore outfielder, was hit by pitches in the second, fifth, sixth, eighth and ninth innings. He went 0-for-1.

“’I have kind of mixed feelings,’ said Quentin, who was hit by a team-high 14 pitches last season. ‘It's kind of fun to have a record, but it's not too fun to get hit five times.’”

Among the more than 3,000 players in history with at least 1,000 plate appearances, Quentin ranks second in HBP frequency, for now. If he gets hit in just one of his next 17 plate appearances, he will be the leader. On Aug. 17, he was still the leader, before going hit-by-pitchless over the rest of the season. The leaderboard:

Seventeen of the top 50 players on this list were catchers. (Eleven of those were primarily catchers. Others, like Craig Wilson and Biggio, came up as catchers or caught occasionally.)

The fastest pitch that Quentin has taken in the past three years was a 97-mph fastball from Neftali Feliz. Quentin just stayed still and left his arm out for it:

“I’d give any hitter credit. If you stand up there and don’t give ground, don’t really get out of the way and you want to take a 96-mph fastball and you don’t have a pad on your elbow, you deserve that base.”

That HBP against Neftali Feliz was actually quite clutch, or contextually significant, or whatever you want to say. The game was tied in the ninth. There was a runner on first and two outs; the White Sox had just removed Paul Konerko from the game for a pinch-runner, so they were going to be at a disadvantage if the game went into extra innings. Quentin not only reached first, but moved the runner into scoring position. The next batter doubled and both runners scored, and the White Sox won.

Somewhat surprisingly—to me—Quentin doesn’t seem to have any particular ability to get hit in pitcher’s counts. The glory of the HBP is that it can entirely undo a lousy count, whereas an inside pitch taken for a ball can only make a lousy count less lousy. A HBP on 0-2 would, then, be more valuable than a HBP on 2-0 (and, obviously, 3-0, where a HBP is no more valuable than a ball). But Quentin isn’t more likely to get hit when he’s behind in the count. Since 2009:

Most perplexing is how frequently Quentin gets hit with three balls. You don’t need to do that, dummy. One might conclude from this that Quentin doesn’t have as much control of these HBPs as the clutch discussion above seemed to suggest.

Quentin once got hit by a Jon Lester pitch that was 0.856 feet from the center of home plate. That is a pitch that is less than two inches inside. Quentin took 30 called strikes in 2011 that were further inside than this pitch. (Jon Lester has hit Quentin in three of the 15 times he has faced him. Nick Blackburn has hit 18 batters in his career; Quentin is four of those.) 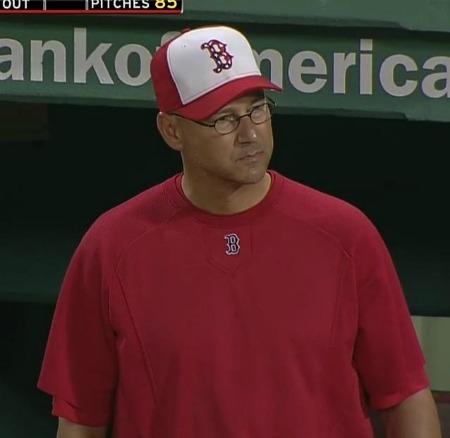 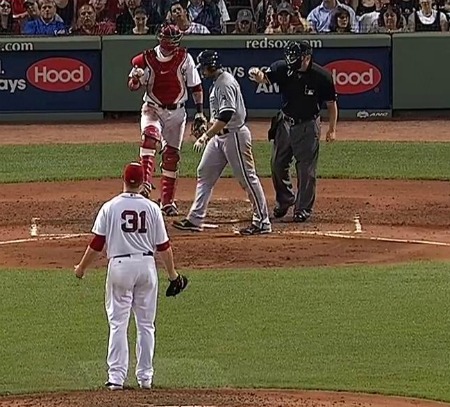 “He also hasn't been hurt by any of the pitches that have hit him this year, which surprises Diamondbacks manager Al Pedrique.

“‘When you get hit that many times, sooner or later, I hope he learns to get out of the way so he doesn't get hurt big-time,’ Pedrique said, adding he would remind Quentin to try to avoid being hit as often.”

You need to be logged in to comment. Login or Subscribe
tombores99
Does Quentin really have zero HBP's on 2-0? That lone data point has a loud voice.
Reply to tombores99
Behemoth
Except that he gets hit more often than average (for him) in a 3-0 count, which is not what you would expect if the 2-0 thing was anything other than chance.
Reply to Behemoth
tbsmkdn
A great one today, Sam.
Reply to tbsmkdn
crperry13
Hilarious!
Reply to crperry13
pjbenedict
Procrastination occasionally leads to brilliance :-)
Reply to pjbenedict
Ogremace
Love the pictures of Lester etc.
Reply to Ogremace
Worthing
Awesome.
Reply to Worthing
saigonsam
Great! Very interesting stuff.

Reply to saigonsam
MichavdB
Great article! Especially liked the part about Betancourt being on the Price is Right.
Reply to MichavdB