Superior Labrum Anterior to Posterior (SLAP) tears are an increasingly common injury in baseball players. Much more common in throwing athletes than non-throwers, SLAP lesions have gained a lot more attention as baseball pitchers have been studied in greater detail.

Anatomy
As we described in a previous article, the shoulder is made up of three bones but many different soft tissues. The clavicle, scapula, and humerus serve as attachment sites for the various muscles, ligaments, tendons, and nerves in order for proper function to occur. In the case of SLAP lesions, we are most interested in the labrum and the tendon of the long head of the biceps.

The labrum functions to deepen the socket of the glenohumeral joint and give it a little more stability. Many of the ligaments in the shoulder attach to the labrum, and the long head of the biceps tendon attaches at the top of the labrum and glenoid. The function of the biceps in promoting stability of the glenohumeral joint is to provide restraint to excessive anterior and superior translations. 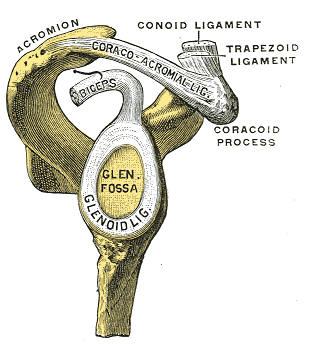 Normal anatomic variants can also be in the area and seem like injuries. One normal variant is called the sublabral foramen, an actual opening beneath the labral attachment of the anterosuperior labrum which closely mimics a type of SLAP tear that is described later on. Another very common variant is called the Buford complex. In this variant, one of the glenohumeral ligaments attaches at the site where the biceps tendon inserts. The portion of the anterosuperior labrum is absent, and this ligament crosses over the subscapularis tendon. The anteroinferior labrum appears normal, and therefore the Buford complex can be incorrectly called a labral tear. If a surgeon tries to repair this Buford complex by attaching the ligament to the bony glenoid, the shoulder will have extremely limited external rotation and will not be able to return to its previous competitive levels.

Classification types of SLAP Tears
The term “SLAP tear” merely refers to the location and orientation of the labral tear. There are four main types or classifications of a SLAP tear, although other types do exist.

·         A Type I SLAP tear involves fraying of the labrum in this area, but the biceps tendon attachment is normal.

·         A Type III tear occurs when there is a piece of tissue that hangs or flips down into the joint, similar to a bucket-handle meniscus tear in the knee.

·         A Type IV tear occurs when the tear extends from the labrum into the biceps tendon itself.

Of course, just to make things fun for the players and the clinicians, combinations of the different types above can also occur. 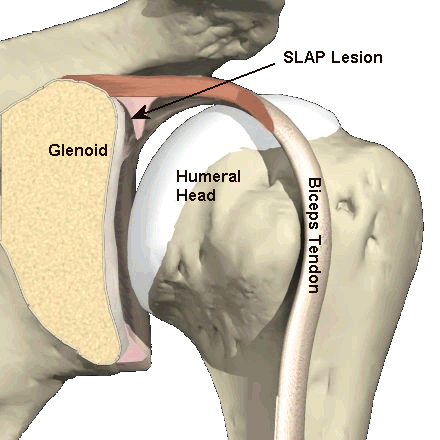 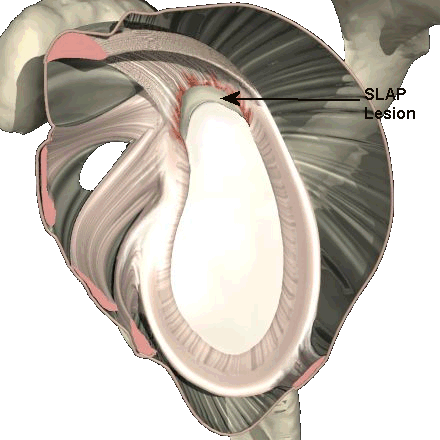 With multiple classifications of SLAP tears, there is no single mechanism of injury. In baseball players, though, we often see a Type II caused by a peel-back mechanism of the biceps tendon attachment. The site experiences traction from the biceps tendon and causes the area to pull back and arch away from the attachment site. If it is large enough, then we may see the glenohumeral ligaments becoming compromised and the shoulder experiencing some instability.

SLAP tears rarely happen in isolation and are associated with everything from impingement to rotator cuff tears to AC joint issues. They have been shown to be influenced by glenohumeral internal rotation deficit (GIRD), which has also been implicated in rotator cuff pathologies. It should come as no surprise, then, that about 40 percent of cases of SLAP tears also have related rotator cuff injuries.

It is believed that the peel-back mechanism described above occurs during abduction and external rotation, which cause the biceps tendon insertion to twist and start to tear anteriorly before eventually extending posteriorly. If this abduction and external rotation position sounds familiar, it’s because it’s during the late cocking phase of throwing that the shoulder reaches that position and is prone to several different injuries.

Interestingly, Shepard et al found that in this position of abduction and external rotation, the force required to produce a SLAP tear in cadavers is almost 50 percent of the force required during long axis traction seen during the deceleration and follow-through phases. If we asked everyone to guess how much force was required, very few would correctly estimate around 60 pounds.

Clinical presentation
In order to evaluate potential SLAP tears, a clinician must pay special attention to the patient’s history. Similar to other shoulder injuries, pain often occurs during the cocking stage of throwing. It is a vague, deep pain that can sometimes have the feeling of a dead arm, especially after throwing. Clicking and popping often occur, but they can’t be pinpointed like they can with other injuries. Velocity can also drop significantly because of the pain and decreased efficiency during the pitching motion.

Many different evaluations can be performed in clinic, but they are often confusing because of other injuries present at the same time, such as rotator cuff tears. Ultimately, several studies have shown that there is no single clinical test that can reliably assess SLAP tears.

When it comes to diagnostic imaging, radiographs have a very low yield. They can be useful in ruling out other issues that may be causing similar pain, such as severe AC joint arthritis or subacromial impingement. MR arthrography is the preferred choice to search for SLAP tears, although ultrasonography may be much more useful and cost-effective in the future.

In some cases, even if all the tests come back normal, the player still can’t go out and throw a ball without pain. It is not uncommon to have a SLAP tear without any positive findings on imaging, so the only way to identify a SLAP tear definitively is to undergo surgery.

Treatment
SLAP tears can be treated non-operatively, especially if caught early enough. However, often by the time they become serious enough that the player reports discomfort, it’s already too late to treat them without surgery. If the player refuses to have surgery initially, he has to avoid not only throwing but working out as well. Motions that could stress the area, such as biceps exercises, military presses, and some external rotation exercises, must be avoided, at least in the short term. A physical therapy program follows, including a return to-throwing program, as the months away from the field fly by.

The type of surgery depends on the nature and extent of the tear. Type I tears don’t have any biceps tendon anchor or labrum instability and therefore do not require a major repair. The surgery is done arthroscopically and involves trimming or shaving all of the frayed portions.

Type II tears are more common in baseball players and involve a bigger surgery than Type I tears. After the standard portals are made, the fibrotic tissue is shaved down to the bone, and a hole is punched into the top part of the bony glenoid to hold the bony anchor. After it’s placed, two sutures are then run through the biceps tendon and the labrum to approximate the two torn ends. After everything is tied together, the surgeon checks his repair by pulling on the biceps tendon arthroscopically and seeing if there is any separation.

Post-operative treatment involves a sling. No stressing of the biceps occurs for at least six weeks, with heavier lifting delayed even longer. The surgeon’s protocol is highly dependent on the extent of the damage and personal preference. Some allow use of the sling to be discontinued after one week, but most require at least four weeks of use. According to our records and several studies, the player often returns in a little over one year.

Outcomes/Summary
The outcomes for SLAP repair in professional pitchers are not yet as positive as they are Tommy John surgery. Many pitchers return to the mound but continue to experience pain or diminished performance. The problem lies in the critical position of abduction and external rotation, where it takes half as much force to produce a SLAP tear as it does during normal tensile loading. Cardinals fans should be thankful that Chris Carpenter was one of the lucky ones who performed at a higher level after surgery.

You need to be logged in to comment. Login or Subscribe
moonlightj
I've had 2 type II tears & resulting surgeries/rehab and still learned new material from this piece.
Reply to moonlightj
cidawkins
Thanks, that was what I was going for
Reply to cidawkins
thegeneral13
This article is fan-f'ing-tastic! A great explanation of a nebulous injury that I have always had a difficult time fully understanding. I had surgery for a Type II tear while in college and never made it back to pitching. Still can't throw (now learning to throw lefty) or lift. In my case I had some small rotator cuff tears (nothing major) and a loose capsule (Corey, I've posted a comment to one of your articles before about thermal capsulorrhaphy, which I had done). Anyway, it's amazing how quickly you can go from 100% healthy to caput. Gave me a new respect for the durability of major league pitchers and also a better understanding of injury cascades (in my case I think the shoulder laxity developed b/c my shoulder strength deteriorated while recovering from elbow surgery the previous year, thus putting more stress on my labrum - but that's just my hypothesis).

I'm curious, though - is this considered a "wear" injury as opposed to one caused by a specific indcident? It felt to me like the former but I've never been sure.

Thanks for the great article!
Reply to thegeneral13
cidawkins
In baseball, in particular with pitchers, it's almost always a gradual wearing down before a single episode sends it down.

Other sports or in everyday life it tends to be more of an acute injury like a fall or catching something heavy unexpectedly.

I'm glad that you like the articles.
Reply to cidawkins