The long eyes of history may have resolved the debate in these past sixty years or so, but, when they were still living, there was plenty of debate about who was the greatest player of all time, Babe Ruth or Ty Cobb. In the inaugural voting for the Baseball Hall of Fame, for example, it was Cobb who received the greatest number of votes, not Ruth (222 to 215, out of 226 votes cast). As you might expect, it was Cobb's skill at small ball (stealing bases, bunting, etc.) that old-timers clung to in the debate while the younger crowd marvelled at Ruth's power.

But it wasn't just on the baseball diamond that these debates raged. As the two greats enjoyed their retirements, they each took up the game of golf and, apparently, became quite good. Cobb, for example, was able to play plenty of his rounds at the renowned Augusta National and even shot an 81 in a group with Sammy Byrd and Sam Snead there. Fans, as they are wont to do, carried their baseball debates over onto the links. Finally, in the summer of 1941, the retirement "feud" between Cobb and Ruth came to a head when Cobb challenged the Babe to a series of charity golf events for the war effort.

The three games were played in June and July. As the series kicked off, there was much excitement. Writing for the AP, Bill King analyzed the pair's games:

Cobb, at 54, and Ruth, seven years younger, play golf about the same way they hit baseballs, judging by their practice rounds … Cobb's shots off the tees and on the fairways were straight but only of average length. But he was deadly accurate on the greens. Ruth clouted his wooden shots as far as he did when he compiled his 60-homer record but he lacked his rival immortal's skill with the putter.

When the challenge was announced, Henry McLemore (who played many a hole with Cobb) wrote:

[Cobb] plays each shot as if his life depended on the outcome of it, and his behavior after a bad shot is about the same as it was when a pitcher dusted him off in the old days. Like Ruth, Cobb is a left-hander and his swing retains many of the features of the baseball swing. He tries for a triple or a home run on every tee shot, just as the Babe does. He doesn't hit as long a ball as Ruth does, but he probably is a little surer around the greens.

It doesn't happen much, but the experts' analysis paid off. In the first of three meetings, Cobb beat Ruth 3-and-2 after a better round on the greens:

Thus ended a 10-year cross-country debate as to which of these baseball slugging immortals is the better left-handed golfer. … As the loser Ruth was reticent. "His putter was too hot for me. Some were lucky, but you can't sink that many putts and have them all lucky," he said.

Two days later, Ruth won the second match with a "1-up decision in 19 holes over Ty at Fresh Meadow Country Club". The rubber match was played a month later:

Ty Cobb defeated Babe Ruth in the rubber game of their charity golf series at Detroit … The match between the two baseball greats was called at the end of the 16th hole on account of the heat, with Cobb 15 strokes and Ruth 18 over par.

So, while history seems to have given Ruth the final victory in the greatest ballplayer debates, it clearly didn't take into account their prowess on the links. It may be a small victory for Cobb, but, considering what we know about the man, I'm sure he'd take all he could get.

The real question is, though, what pair would make that foursome the most interesting? Right now, my money is on Michael Jordan and Charles Barkley. 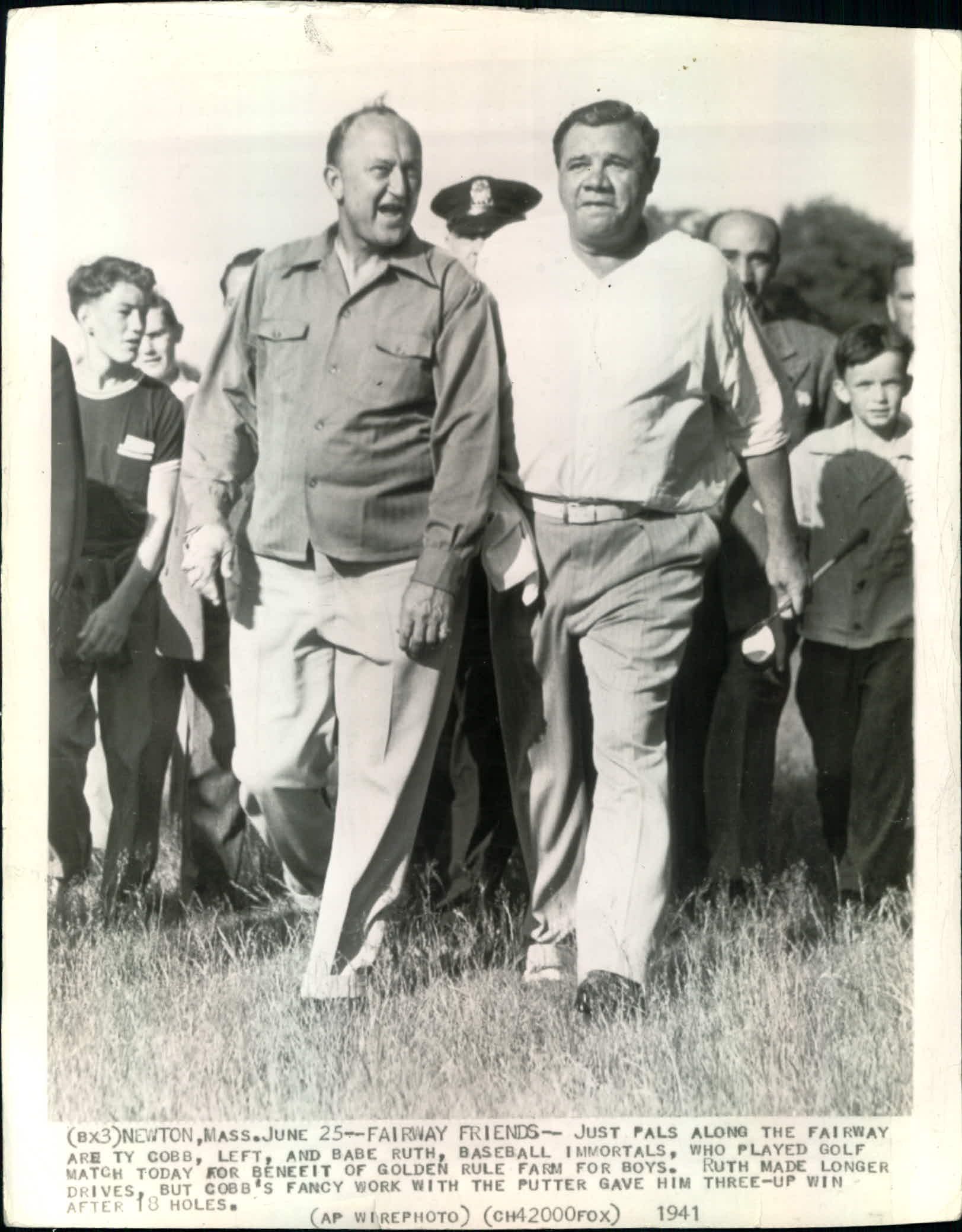 Very interesting, but since the U.S. was not involved in the war until December 1941, what war effort were they supporting in the summer of 1941?
Reply to jtwalsh
BurrRutledge
I believe it was actually for the "Golden Rule Farm for Boys" but I could be mistaken. It was a long time ago...
Reply to BurrRutledge
lgranillo
Sorry, the language was a bit imprecise.

In the McLemore piece linked above, Cobb says, when issuing the challenge: "Maybe we could raise some money for bundle for Britain or some other war relief."

In a different piece I saw but didn't link to (here: http://news.google.com/newspapers?nid=1144&dat=19410728&id=CE4bAAAAIBAJ&sjid=bEwEAAAAIBAJ&pg=4345,6380760 ) it says: "the third clash in their fairway feud from which gate receipts go for the benefit of the United Service Organizations" (which is, of course, the USO).

I'm not sure if I saw the other charities mentioned.
Reply to lgranillo
michaelstreet
Babe's biographer Robert Creamer, and both Cobb's biographers Charles Alexander and Al Stump (i.e., Cobb himself) all say the match was for "war charity." This would definitely include the USO, which was chartered in February of 1941.

Cobb called the match "The Has Been's Golf Championship of Nowhere in Particular," but he (predictably) took it very seriously.

Great stuff, as always, Larry!
Reply to michaelstreet
BurrRutledge
(off-stage whisper: Check the caption on the photo...)
Reply to BurrRutledge
iorg34
Awesome article - very interesting stuff.
Reply to iorg34
adambennett
This is great-thanks.
Reply to adambennett
ScottBehson
Larry, your articles have really made a great contribution to BP
Reply to ScottBehson