We’re hearing reports of microfracture surgery, arthritis, and osteochondral and articular cartilage injuries increasingly often. Given today’s emphasis on year-round training at an earlier and earlier age, cartilage injuries are going to become only more common in the future. We’ve made numerous advances in repairing cartilage injuries, but we still aren’t 100 percent there. Local cartilage defects are more of a problem than degenerative arthritis in the young, athletic population we report on here, so in this installment, we will primarily look at focal cartilage injuries and their management.

Background Anatomy
Articular cartilage is the hyaline cartilage on the ends of the bones in a synovial joint, very similar to the white cartilage on the ends of chicken bones. It’s important to note that this is a different type of cartilage from that found in the labrum or meniscus. Typically we hear about cartilage injuries in the weight-bearing joints of the lower extremities, but there is articular cartilage throughout the remainder of the body. Synovial joints come in many different varieties, including ball-and-socket (hip and shoulder), hinged (elbow, knee, fingers, toes), gliding (wrist), pivot (top of neck), saddle (CMC joint of thumb), and condyloid (forearm to wrist joint). The cartilage gets the majority of its nutrition through the synovial fluid that is present inside the joints. 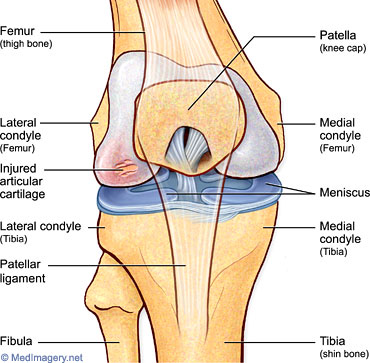 Cartilage comes in different thicknesses depending on the location, but the thickest is usually in the knee at just 0.07 inches to 0.15 inches, which doesn’t leave a lot of room to spare. There is no direct blood supply to, nor innervation of, the cartilage itself. This is why many cartilage tears do not become painful until the first few layers of the cartilage are compromised. The lack of blood supply also means that the cartilage has very little ability to heal itself and usually requires assistance from medication, injections, or surgical intervention to correct the gliding mechanisms.

Function
The role of the articular cartilage is both simple and complex. It can take on mechanical stress without the risk of permanent distortion, which aids in shock absorption. Its main function, however, is to permit easy movement by allowing the surfaces glide to over one another with almost no friction. Cartilage has one of the lowest coefficients of friction—the ratio of the force of friction between two bodies sliding over one another and the force pressing them together—of any substance or surface that has been studied.

Injury
By the time articular cartilage makes it into Collateral Damage, it has usually been injured in some way. Cartilage can be damaged acutely from a single episode or from gradual degeneration over a long period of time. This generalized articular cartilage damage is what is traditionally thought of when discussing arthritis but is different from what we typically see resulting in localized cartilage surgeries such as microfracture. 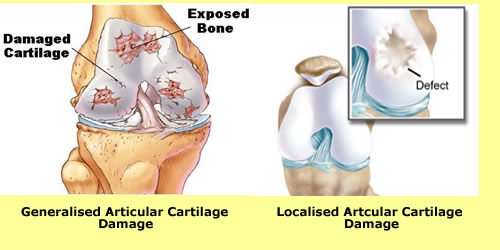 When cartilage is damaged, the joint surfaces are no longer smooth and the gliding mechanism between the two bones is interrupted to some degree. In acute injuries, compressive or shearing forces can force the surface to be roughened, depressed, or torn. Cartilage can also be injured in conjunction with other injuries, such as episodes of instability, patellar dislocations, and ACL, meniscus, or severe ankle sprains.

It can also erode gradually over a long period of time, which typically leads to the osteoarthritis that so many people are afflicted with. Over a sufficiently long period, almost everyone would develop some sort of arthritis, because the cartilage cannot heal itself and we are always on our feet. However, the degenerative process is often sped up by the constant impact activities and repetitive loading of the joint that come with countless hours of practice and competitions.

Presentation
Turning our focus to osteochondral injuries other than degenerative arthritis, the signs and symptoms can vary depending on the degree and exact location of injury. Common symptoms include clicking, swelling, crepitus (a sense of the joint grinding), locking of the joint, or persistent pain. Other injuries also have overlapping symptoms, such as a torn meniscus, labrum, or joint instability, and must be ruled out.

The cartilage is most commonly injured with traumatic rotational forces while the joint is being loaded. Examples include cutting, pivoting, or landing in an awkward position for the lower extremities. Cases of upper extremity cartilage injuries are more likely to be the result of episodes of instability, such as shoulder dislocations, or gradual erosion, as with with elbow laxity.

X-rays cannot provide a direct method of evaluating cartilaginous injuries, especially in the acute setting. With gradual degeneration, standing x-rays can provide a clue as to how thin the cartilage is and how close the bones are to rubbing against each other. Basic MRIs are able to provide a much clearer picture without the risk of radiation exposure. Of course, the only definitive, direct method of evaluating the cartilage is through surgery, usually under arthroscopic evaluation.

Non-operative Treatment
Small, contained lesions can be treated non-operatively, which slows the degradation of the tissue over time. Anti-inflammatory medications can also help with the pain. Viscopsupplementation directly into the joint with substances such as Euflexxa or Synvisc can improve the gliding mechanism between the bones by improving the lubrication of the joints. Unloader braces can be fabricated to take pressure off the body part and are most often used in the knee.

Surgical Treatment
If conservative management fails or the lesion incorporates too much of the joint surface, surgery is usually necessary. There are many different surgical procedures in these cases, and the one chosen depends on the type of cartilaginous injury. The vast majority of procedures in professional baseball players or younger athletes focus on specific areas of the joint rather than the gradual general osteoarthritis seen in advanced age.

Microfracture
Microfracture surgery is one of the most common surgical methods of repairing cartilage tears and was developed by Dr. Richard Steadman in the late 1980s and early 1990s for the treatment of localized areas of full thickness cartilage loss down to the bone. Typically performed arthroscopically, multiple microfractures or tiny holes are created in the subchondral bone under the cartilage, approximately three to four millimeters apart, to encourage blood and mesenchymal stem cells from the bone marrow to flow into area of cartilage loss. A small awl punches each of the holes in the area to promote a good amount of bleeding. A combined clot of the mesenchymal stem cells and blood forms a cap over the area of cartilage loss by adhering to the tiny holes formed by the microfractures.

Pressure must be taken off of the area for several weeks in order to prevent the newly formed clot from being squeezed out. Over a few months, the clot hardens and smoothes into a form of cartilage called fibrocartilage, which slightly less effective than normal articular cartilage but much better than nothing. In the hands of a good surgeon, microfracture can be very successful in returning the athlete to play with reduced pain and improved function in anywhere from two to six months, depending on the size and surface of the area. Typically, the fibrocartilage can last for at least a few years before it too wears down—since it’s not the same substance as the surrounding cartilage—and something else needs to be done.

One of the greatest benefits of microfracture is that very little is lost if it is unsuccessful. Other techniques that we will discuss later involve taking cartilage from one area that is not as important in order to replace or plug the original cartilage defect, in effect robbing Peter to pay Paul. Healthy articular cartilage is hard to come by, and microfracture does not disturb other areas of healthy tissue. It focuses solely on the injured area, so if it fails, other, more aggressive measures can still be performed in the future.

Recovery from microfracture is almost always quicker than other procedures. Athletes in cutting and pivoting sports are usually reintroduced at roughly the six-month mark, with adjustments based on the sport and the size of the defect.

While we most often hear about microfracture involving the knee, it is also often used in the ankle, hip, thumb, elbow, shoulder, and big toe, to name a few places. Two other procedures, drilling and abrasion arthroplasty, follow the same premise and much of the same procedure but come with other risks. In the former, tiny drills are used to create the holes, but the heat from the drill may damage other healthy tissue and cause further damage (although this is relatively unlikely). Abrasion arthroplasty burrs away all the damaged tissue to reach the subchondral bone and produces bleeding, but it is less precise than microfracture and may not provide a sustained reparative response. It is believed that the abrasion arthroplasty provides only about two to three weeks of healing, which is not much time for the clot to transform into new cartilage compared to the six weeks commonly used with microfracture. Thus, microfracture is considered the benchmark to hold other cartilage repair procedures up against.

Autologous Chondrocyte Implantation (ACI)
ACI is a newer procedure that was developed as an alternative to microfracture, especially in younger patients whose cartilage defect is greater than two centimeters in diameter. In the United States, Genzyme’s Carticel treatment is the only FDA-approved treatment that uses your own cultured cells to treat damaged articular cartilage in the knee. It takes two different steps, and therefore two different surgeries, to complete the process. In the first surgery, healthy cartilage is removed from one area of the joint that is basically non-weight-bearing and isolated. The cartilage is then taken to a lab, where it is cultured, or grown, for several weeks to months before the second surgery is performed.

Much more takes place in the second surgery. The area of the lesion is cleared of any scar tissue that may have formed in the interim, and a bony cover is actually sewn into place over the cartilage defect and sealed with fibrin glue. The cells grown in the lab are then injected underneath this bony cap and allowed to settle into place. 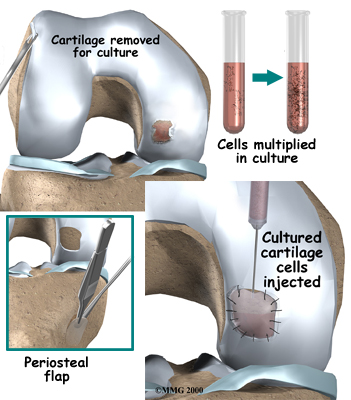 Rehabilitation from ACI surgery is similar to microfracture but much longer. Weight bearing is limited for the first few months, but high-impact pivoting sports cannot be resumed until 12 months after the second surgery. Many athletes do not fully recover until 16-18 months after surgery. 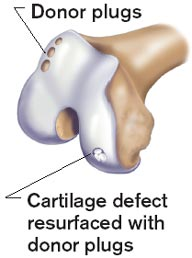 Osteochondral Allograft Transplantation
If the defect is too large for any of the other techniques, an allograft from a cadaver donor can be employed. In a method similar to the Osteograft Autograft Transplantation procedure, a block of bone and cartilage can be shaped and used. The cadaver graft is always sterilized and prepared in the lab prior to the surgery to ensure optimal results without complications.

Summary
We are likely in the middle of a run in which specialization and year-round training are taking tolls on joints at younger and younger ages. Fernando Martinez is only 23 years old, but he has already been diagnosed with an arthritic right knee, while Grady Sizemore underwent microfracture surgery on his left knee in 2010. We’re probably going to see more and more microfracture surgeries in the coming years as more cartilage injuries present themselves and players and teams grow more comfortable with the recovery. Other procedures will be used only as a last result because of the lengthy recoveries involved.

You need to be logged in to comment. Login or Subscribe
bravejason
Great article. Very informative. Bonus points for the good pictures. The most interesting part to me was the tidbit about the coeffcient of friction of cartilage.
Reply to bravejason
cidawkins
Thanks. Yeah I find it amazing how smooth healthy cartilage is
Reply to cidawkins