When writers make lists of the best pitches in baseball, the list usually goes something like this:

It shows up on my list, though. My list isn’t the best pitches in baseball. It’s just Three Pitches That Are Interesting To Talk About.

1. Javier Lopez’ drop-down delivery.
Javier Lopez doesn’t have much to work with. He throws 88 mph. His changeup is lousy. He controls his slider well, but it doesn’t have the sort of bite to get swings and misses. Right-handers have a .379 OBP against him in his career. But what Lopez can do is throw the ball from, roughly, the Doggy Diner Grill Cart behind section 105. This is Javier Lopez’ 2011 release-point chart, via Joe Lefkowitz: 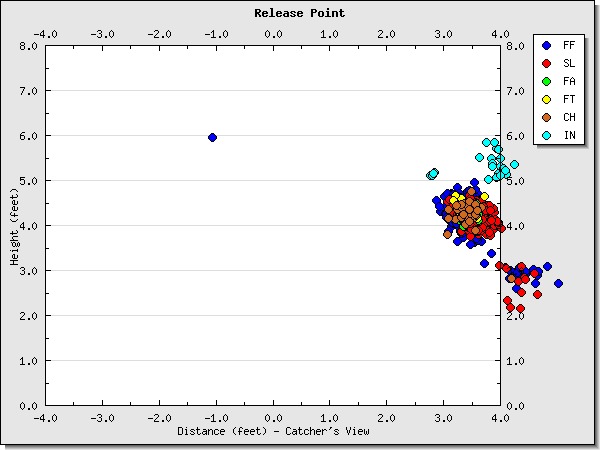 Lopez’ average release point—about four feet above the ground, and four feet from center—is the most extreme for any left-hander who got significant playing time in 2011. But that average release point isn’t what I love about Lopez. It’s that whole subset of pitches that are off the PITCHf/x chart entirely. Like this one:

Thirty-five times this year, Lopez’ release point was at least 3.95 feet away from center and within 3.5 feet of the ground. He threw 57 such pitches in 2010. (He dropped down before that, too, but not as far, according to PITCHf/x.) Obviously, 92 pitches isn’t anywhere close to enough to be drawing conclusions. It’s the equivalent of about 25 batters, or one start. Javier Lopez’ drop-down delivery has made one start. So take this in the spirit of amusement, not analysis, a disclaimer that you should add to every sentence of the rest of this piece. Here is how Javier Lopez’ drop-down-delivery start went:

On a per-pitch basis, here are his results compared to Roy Halladay’s cutter, a commonly cited Best Pitch In Baseball.

I would never argue that Lopez’ pitch is as good as Halladay’s. If I did argue that, I would do it with letters cut out of magazines, like a ransom note, so nobody would know it was me. The sample doesn’t give us nearly enough evidence to conclude anything, for starters. And if Lopez’ pitch was that good, he’d be able to throw it more than once per outing. If Lopez’ pitch was that good, Lopez would be a lot better. It’s effective precisely because he goes to it once per outing. It’s crazy effective, though.

His fastball velocity has done this:

While his strikeout rate has done this:

He’s been able to do this by throwing sliders 72 percent of the time, according to both Baseball Info Solutions pitch classifications and PITCHf/x. Or, I should say this, he has been able to do this while throwing sliders 72 percent of the time, and maybe those facts are related, but I’m not going to go all the way there. Seventy-two percent is the highest slider rate that BIS has recorded in its decade of classifying pitches; only Jeff Nelson in 2005 topped 70 percent. (Coincidentally, David Gassko in 2010 used game theory to try to calculate how often Lidge should throw his slider and came up with 50 percent. But that was without factoring in Lidge’s deteriorating skills.)

In September, Lidge threw 77 percent sliders, according to PITCHf/x. On September 4, he threw 12 sliders in a row. That’s just amazing, whether it’s a good strategy or not. It just shouldn’t be possible, and yet Lidge struck out more than a quarter of the batters he faced in September and allowed one run that month.

Throwing so many sliders has also, as you would expect, cost him a lot of walks, because his slider is a high-whiff pitch that is mostly thrown outside the strike zone. And, as you would also expect, throwing so many sliders has coincided with each individual slider being less effective. Compared to 2008, when he threw his slider about half the time, Lidge’s slider is more often taken for a ball (35 percent in 2011; 33 percent in 2008), less often missed when swung at (41 percent to 51 percent) and less often converted into an out when it is hit (66 percent to 74 percent). Of course, his slider has also lost four mph of velocity, so it could just be that it’s not as good as it used to be. Or it could be that we’re talking about a pointlessly small sample. For entertainment purposes only!

Rodriguez had a pretty typical platoon split as a prospect. Righties hit about .195/.300/.290 against him in the minors. Lefties hit about .265/.390/.420. Rodriguez has had a changeup all along—Kevin Goldstein noted he had a good feel for it as far back as 2007—but when he came up to the majors in 2009 and 2010, he almost never threw it. In 2011, he used it a ton—every fourth pitch to lefties, a total of 117. Of those, the batters swung at 67. Of those, they whiffed on 36. That’s a higher whiff rate than Tim Lincecum and Cole Hamels get on their changeups; about the same as Ryan Madson. (He threw it just three times to right-handers, according to PITCHf/x. All for balls.)

Those are all changeups.

He doesn’t control it so well, though, so a) he doesn’t get a great strike rate on it, despite all those swings and misses and b) he actually wasn’t all that dominant against left-handers this year. Despite an isolated power of zero, lefties hit .238/.370/.238 against him, with 20 walks and 19 strikeouts. If I had started this piece by saying I was going to talk about Henry Rodriguez’ changeup, which helped lefties post a .370 on-base percentage, you wouldn’t have read this far. You may not have actually read this far anyway. You may still be listening to those handclap songs. What the heck, here’s another.

You need to be logged in to comment. Login or Subscribe
NYYanks826
This was a fun article. I know that Henry Rodriguez frequently touches triple digits with his fastball. Is it safe to assume that he has the fastest changeup in the majors?
Reply to NYYanks826
pjbenedict
Way fun article indeed. Thanks. I enjoy the mixed media and the kind of discovery I couldn't/wouldn't make on my own time. I'd enjoy another couple/few of these.
Reply to pjbenedict
eighteen
What he said.
Reply to eighteen
hotstatrat
Yeah, it looks like Sam is now a regular here - not just a special guest writer. Three cheers!
Reply to hotstatrat
bornyank1
Yes, Sam is one of us now. One of us, one of us!
Reply to bornyank1
russell
Thoroughly enjoyable article.
Reply to russell
yadenr
Yes, more please. [sound of applause clap]
Reply to yadenr
crperry13
I'm posting to add to the praise.
Reply to crperry13
SamVan
Great article.

I kind of hate Tom Petty, but on the other hand (oops) it seems a little odd to do a survey of hand-clapping in songs and leave out "Jack and Diane."
Reply to SamVan
SamVan
And "Jack and Diane" is actually by John Mellencamp. I don't really like him either, but I guess I'm a moron.
Reply to SamVan
lyricalkiller
Tom Petty has some fine hand-clapping, too. American Girl, for instance.
Reply to lyricalkiller
mattymatty2000
This reminds me of that time I did that funny thing and my grandpa took me aside and said, "Son, you ain't no Sam Miller." Sure, he was drunk and referring to his cocker spaniel of the same name pooping in the cooler, but the point still stands.
Reply to mattymatty2000
marshaja
I'm fascinated to know about the outlier point of Lopez that looks like he may have thrown the ball with his right hand.
Reply to marshaja