The news of the morning has been the Los Angeles Angels signing of Albert Pujols (and C.J. Wilson and Curt Flood and Cap Anson and…), and with good reason. But let's not forget that the news of the week has belonged almost exclusively to the Miami Marlins. With the signings of Heath Bell, Mark Buehrle, and Jose Reyes, and their dogged pursuit of Pujols and other high-priced free agents (rumors also tied them to Prince Fielder and Wilson throughout the week), the Marlins appear to be in another of their every-five-to-ten-year spending sprees that have helped nab them two World Series Championships in 18 years of existence.

To celebrate this cycle of success the Marlins seem to have perfected throughout their history, Milton Bradley (no, not *that* Milton Bradley) is releasing a new boardgame called "The Marlins Life-Cycle" soon! In the game, players take turns rolling a single die as they try to avoid the pratfalls of running a small-market ballclub on their way to a World Series title.

Players draw "Business As Usual" cards as they make their way around the board, featuring such Marlins-esque moves as "Trade away your best player" and "Sign Jeff Conine". There's also the chance of a "Big Winter Bonanza", where players might "Trade for a future Hall of Famer". But beware of "False Winters" and watch out for the nearly-unavoidable threat of a "Fire Sale"! 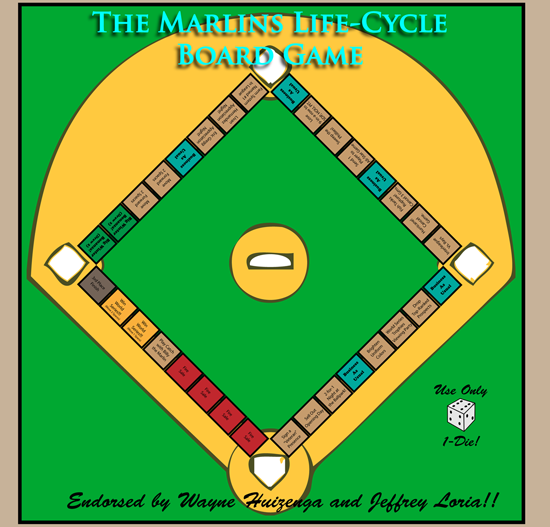 Click the image to see the game board and to see more "Business As Usual" and "Big Winter Bonanza" card options.

With the Angels signing of Pujols today, it's obvious which "False Winter" card Larry Beinfest pulled today. But what will happen when you're in charge of the Marlins?

The Marlins Life-Cycle board game goes on sale next week. Feel free to trade it amongst your friends – no-trade clauses are strictly forbidden!

You need to be logged in to comment. Login or Subscribe
joseconsuervo
After reading this I still don't quite understand which Milton Bradley is making this thing. But very good, I would probably buy it if it weren't for the 90% of the time that the game play is disappointing.
Reply to joseconsuervo
jnossal
Should the Eric Gregg space be double-wide?
Reply to jnossal
LlarryA
I expected one of the 'Move ahead 2 spaces' squares to lead to a 'Move back 2 squares', but that would be in the Pirates' and Royals' editions, wouldn't it?
Reply to LlarryA
sam19041
Genius!!
Reply to sam19041
Sacramento
What with the SEC investigation I was expecting a Go To Jail square.
Reply to Sacramento
lgranillo
Fantastic suggestions, everyone. A BP crowd-sourced version of this game would be a bestseller!
Reply to lgranillo