Rumors have been swirling recently that ex-Mets and Rangers manager Bobby Valentine is among the finalists for the vacant Boston Red Sox position. Terry Francona did not leave Boston under good circumstances, with the ugly news about beer and fried chicken parties (among other stories) having blown through the sports world last month. It's a bit hard to understand why anyone would want to take over such a tainted clubhouse, but Bobby Valentine isn't just anyone. Maybe his, um, unique personality will help set things at ease.

And what a personality it is. Valentine just can't seem to keep himself out of the public eye (and I'm sure he loves it). For example, Valentine, who is currently a part of ESPN's Sunday Night Baseball team, made news last January when it was announced that he would be named the Director of Public Safety for his hometown of Stamford, Connecticut. It's not exactly the type of job you expect an ex-big league manager to take, but it fits Valentine perfectly. 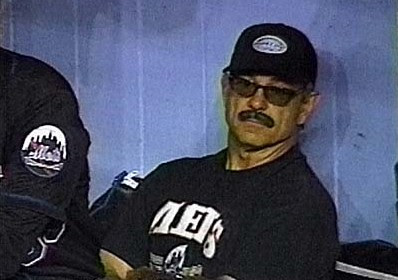 And then there's Valentine's most infamous moment when, in 1999, he was ejected from a Blue Jays-Mets game for arguing a call with the umpire. Valentine went back into the clubhouse like all good managers. An inning later, however, a mysterious, mustachioed man appeared back in the Mets' dugout. It was Valentine, now wearing a t-shirt, sunglasses, and a fake mustache. He was fined $5,000 and suspended three games for the stunt (which ran on SportsCenter practically non-stop that week).

But my favorite story about Bobby Valentine may well be a new one told this weekend by Ken Levine. Levine is an ex-broadcaster for the Orioles, Mariners, and Padres, having partnered with the likes of Jon Miller and Dave Niehaus in his time in the booth. He is also a very accomplished television and film writer. His movie credits include the film Volunteeres, and he has worked in a major way on some of television's biggest shows, including M*A*S*H*, Cheers, and Frasier. Levine also wrote the famous Simpsons episode "Dancin' Homer".

On his excellent blog this weekend, Levine was giving hints to would-be writers on how not to pitch a story to writers and executives. Mid-way through the post, this story about Bobby Valentine pops up:

When I was announcing for the Orioles I once got thrown out of Bobby Valentine’s office for asking tough questions. He was then the manager of the Texas Rangers. Fifteen minutes later I was summoned back, obviously to receive an apology. No. He had heard I was a writer and pitched me a movie. Try not to be an asshole first.

Is there a more perfect Bobby Valentine story than that? Thanks for sharing that, Ken. Just terrific.

I don't know if Valentine is the right fit for the Red Sox in 2012, but I absolutely hope that they hire him. He makes Major League Baseball a more interesting place everyday he's around.

You need to be logged in to comment. Login or Subscribe
mhmosher
IMO, Boston would be lucky to get Bobby V. I am biased - I'm a Mets fan that loves the guy, but what a perfect fit for that team.
Reply to mhmosher
sam19041
Larry, I couldn't agree more. Steven's article is accurate (he said the same thing: Bobby V might not be the best guy for the Sawx). But you are spot on: Bobby V "makes MLB a more interesting place every day he's around." Couldn't agree more.
Reply to sam19041