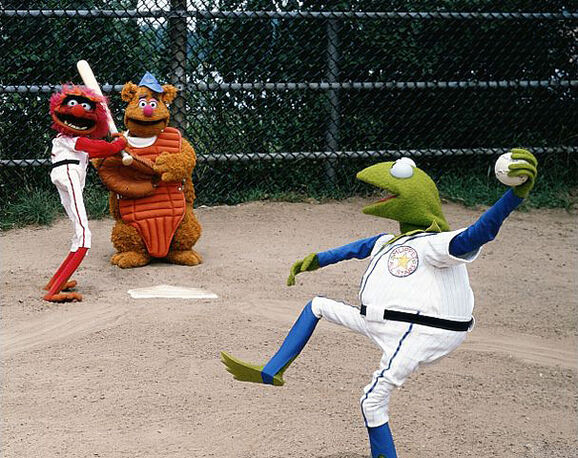 As we head into the Thanksgiving holiday weekend, we can all look forward to some delicious turkey and gravy, some awkward conversations, a little football (if we have nothing else to do), far too many crazy "Black Friday" shoppers, and, oh yes, a new Muppets movie.

For those of us of a certain age, the Muppets (and everyone in the Muppets universe) were an important part of our childhood, teaching us valuable lessons while treating us like adults. Kermit the Frog, Gonzo, Fozzie Bear and everyone else were funny and relatable despite dealing with issues foreign to most 10-year-olds. It's a formula that worked great in 1975 and still works today.

Sadly, the Muppets rarely visit the baseball world. The biggest connection is in the film The Great Muppet Caper, when Charles Grodin frames Miss Piggy while stealing the largest diamond in the world, "The Fabulous Baseball Diamond", which can be found on a baseball mitt-shaped pillow in the Mallory Gallery. Even in the expanded Muppet universe, such as Sesame Street, baseball is rarely featured. The 1986 Mets' visit to Sesame Street, including Ron Darling helping Tully with his baseball card collection and Mookie Wilson and Keith Hernandez playing ball with the Count, is notable, but my favorite moment is below – a scene with Grover at Dodger  Stadium (complete with colorful fans in the crowd).

The Muppets' regular cast of characters is one of the richest, most diverse groups you can find in movies, with everything from singing chickens to weirdos from outer space getting screentime (and making you laugh). It's no accident: when your characters are what define your world and your success, they tend to be well-constructed. With that in mind, it seemed like it might be fun to match up the best-known Muppets with today's ballplayers to see what we might find. As a fan of the Muppets and of baseball, I'm pretty happy with the results.

Kermit the Frog
This one is almost too easy. Kermit is clean-cut, well-spoken and the universally-loved leader of the Muppets. That is the perfect recipe for Yankee shortstop Derek Jeter. I don't know if Jeter ever sits in a swamp singing about the Rainbow Connection, or if he could successfully lead his ragtag group of pals out of a rundown hotel and into stardom, but there's no better Kermit in all of Major League Baseball than Jeter.

Miss Piggy
There are three things that define Miss Piggy: a desire to be in the spotlight, a drive to be loved by everyone, and her relationship with Kermit. Once you remember that Derek Jeter is Kermit the Frog, the Miss Piggy choice becomes incredibly obvious. That's right – MLB's Miss Piggy is none other than Alex Rodriguez.

Gonzo
This one's a bit of a stretch because I was hoping to use only currently active players on this list, but I couldn't pass this one up. Baseball's certified weirdo these last twenty years has been, without a doubt, Manny Ramirez. He may have quit baseball for good at the start of the season, but that's not enough to keep me from calling him the Gonzo of the league. His "weirdo-ness" is too great. (I suppose if I had to go with an active player, I'd choose Ichiro, who has a completely different, "cool" weird vibe.)

Fozzie Bear
Sweet and (kind of) funny, Fozzie is a good sidekick who tries a little too hard to get a laugh out of everybody. San Francisco's closer might not be a sidekick, but he may just be best suited for that role. Brian Wilson certainly has the "trying too hard to be funny"-thing down pat, though.

Animal
Wild-haired and just plain nuts, Animal is the craziest, most energetic member of the Muppets. Whenever Animal is around – whether it's on-stage at the drums or sitting in the back of the bus – you never know what is going to happen. Tim Lincecum might be "the Freak", but Animal's MLB counterpart is actually Jonathan Papelbon. His attitude and antics make every appearance something to pay attention to.

Sam the Eagle
I don't think Luke Scott would mind this comparison.

Rowlf
It's not well-known now, but Rowlf used to be the most popular Muppet. His laid back personality and musical gifts make him very likeable today, but he certainly isn't appreciated at all like he used to be. There aren't many musically-inclined ballplayers to choose from, so I'm stuck taking California-laidback Barry Zito as MLB's Rowlf. I'm not sure how happy I am with it, but at least their personalities seem to match.

Pepe the King Prawn
Easily one of my favorite Muppets, Pepe is a smooth talking prawn with a Spanish-accent, mmkay? He is very funny, but also highly underrated among his fellow Muppets. Adrian Beltre is also really, really good at what he does while being criminally underrated by his peers. The fact that Jon Miller would over-pronounce both of their names in the same way makes it all the more perfect.

That's all I can come up with. The cast of the Muppets is big and varied, with enough minor stars and underappreciated guys for everyone to have a favorite or three. If I missed your favorite, or if there's a better MLB comp out there for someone listed above, let me know.

Dr. Teeth: Roy "Doc" Halladay
Floyd Pepper: Cliff Lee (Floyd's the "1B" to Dr. Teeth's "1A".)
Janice: Cole Hamels (it's the hair)
Zoot: Roy Oswalt (Roy doesn't talk much)
Lips: Whatever fifth starter that nobody ever remembers the name of.

Reply to crperry13
heyblue
I was thinking Tim Lincecum for Janice.
Reply to heyblue
crperry13
Well that's the more obvious physical comparison. Or Bronson Arroyo. But I was going for the 2011 Phillies Rotation comparison, and I think it holds up pretty well.

CAN YOU PICTURE THAT?
Reply to crperry13
heyblue
I like the Phillies rotation comparison. I was thinking Lincecum because of the pot smoking. I imagine Janice to be a toker when the camera's not rolling.
Reply to heyblue
crperry13
Zoot is definitely on some of that Jordan Schafer special.
Reply to crperry13
eighteen
I'll quibble with the Kermit-Jeter connection. To me, it's a stretch linking the character who sings "It's Not Easy Being Green" to a player making $15m a year for a .297/.355/.388 line and bad defense.
Reply to eighteen
mandamin
You really need Jeter somewhere on the list, though. After all, he looks like The Rock had sex with a Muppet. (http://www.tv.com/shows/saturday-night-live/derek-jeter-bubba-sparxxx-and-shakira-96796/)
Reply to mandamin
heyblue
You know, I saw the premise of this article and thought - wezen-ball's stretching a little on this one, but the execution was perfect. Brian Wilson as Fozzie Bear (Wocka wocka wocka!) and A-Rod as Miss Piggy was spot on. I'll never think of either of them the same again.
Reply to heyblue
ian6poole
When I think Rowlf, I think Bronson Arroyo. Rowlf, once really popular; Arroyo, once in a big market. Arroyo even has a sort of shaggy look to him most of the time.
Reply to ian6poole
skaron01
We overlooked Scooter, whose talents were underappreciated and was a main reason why every show was ultimately a success. Was fairly tied to the hip with Kermit (the leader) in making things go smoothly. Not sure there is a great active comparison. Jeter as Kermit does not necessarily translate into Cano or Rivera as Scooter. Andy Pettitte or Bernie Williams feel like better fits.

If we ignore the Jeter as Kermit part, then Brian McCann as Scooter (with Chipper being Kermit) works well for me. Any other suggestions?

Reply to skaron01
orlandoca7
Awesome! As a Mets' fan, i've always gotten a kick out of Mookie & Keith joining in singing Put Down the Duckie.
Reply to orlandoca7